Always on the ‘right’ side also in Ukraine ….

At AIPAC serving his overlords…

Just hours after hours after another video purporting to show the mass execution of up to 250 Syrian soldiers in the desert, The Independent reports ISIS has released a video apparently showing the beheading of a Kurdish man in Iraq as a warning to Kurds fighting the group in the country. The video, entitled “A Message in Blood” ends with the victim beheaded and the fighters warn others will face the same fate should Kurdish leaders choose to continue an alliance with the US.

Image from the latest beheading clip: 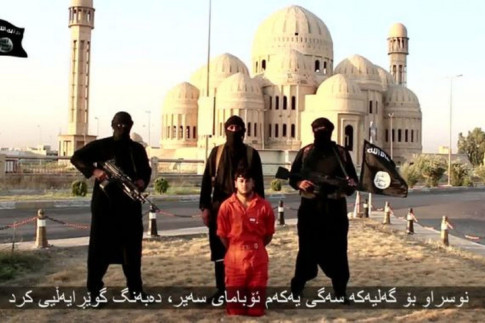 As The Daily Mail reports,

While the captives and executors are dressed in similar fashion to those seen in the James Foley execution 10 days ago, it is unclear if the two incidents were carried out by the same people.

The production of the propaganda video also differs – with the beheading shown alongside still images of American and Kurdish officials in an attempt to help convey the executioner’s message.

In the six minute video, which has not been independently verified, the prisoners, who are are seen wearing orange boiler suits similar to those worn by prisoners at Guantanamo Bay, confirm that they had been fighting for the Peshmerga, and had been captured by the jihadist group.

The video includes one earlier shot of the Kurdish soldiers, appearing to still be wearing their Peshmerga uniforms, shortly after they were captured. Speaking in Kurdish, one of the prisoners, Hassan Mohammed Hashin, reads out a carefully pre-prepared statement, lambasting the Kurdish leaders: ‘You have made a huge mistake by joining hands with America.’

Photojournalist James Foley was repeatedly tortured by his ISIS captors — who even waterboarded him — before he was beheaded, sources told NBC News. As the Washington Post first reported, the Islamic extremists appeared to be deliberately imitating the controversial U.S. “enhanced interrogation technique,” which simulates drowning. Waterboarding, which was authorized by President Bush’s administration, was banned by President Obama, who denounced it as torture.

The alleged Kurd beheading clip can be found here (via The Daily Mail) – yet oddly enough, like the Foley beheading clip the actual decapitation has been faded to black. One wonder how long until more claims alleging this too video was staged emerge?

The execution of 250 Syrian soldiers can be found here – graphic.