As Icenews reports, a fissure eruption has started in the Holuhraun lavafield north of Dyngjujökull. Newly formed crevasses were spotted in surveillance flyovers by scientists yesterday and at that time geophysicist Magnús Tumi Guðmundsson estimated that the magma intrusion which had been monitored for the previous week was moving only 2 kilometres under the surface.  The magma has now breached the surface and the volcanic eruption has been confirmed by scientists in the field. The low frequency tremors suggests the eruption is located outside the glacier. The blaze can be observed in Mila’s webcameras, two of which are trained on Vatnajökull glacier’s Bárðarbunga area. 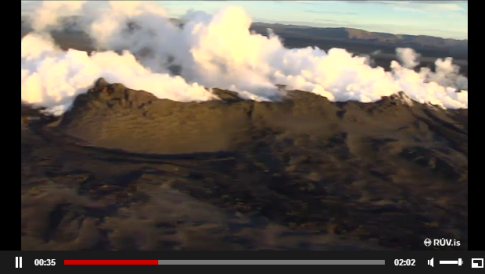 The fissure is thought to be about 1 mile long and runs northeast / southwest. The lava is thin and fast flowing southeast. This is the fissure eruption, which appears to be available as a multi-called dynamic operation of Dyngjujökli towards the caldera.

The fissure is about five miles from the glacier and the longest lava flow is about 500 meters.

Eruption struck around midnight. Activity increased during the first two hours and then decreased it.

Omar Ragnarsson, who flew over the eruption this morning, described the eruption site as an extremely beautiful art gallery of nature created in just one nigh. “We are using this as pottery of all sorts of shapes and sizes,” said Ragnarsson. “Great creativity. If it is possible to speak of ferðamannagos it is this. “‘

The restricted area around the volcano has been reduced from ten to three nautical miles, according to the Transport Office. The area extends 5,000 feet above the ground and within it all air traffic is prohibited other than scientific Coast Guard aviation.