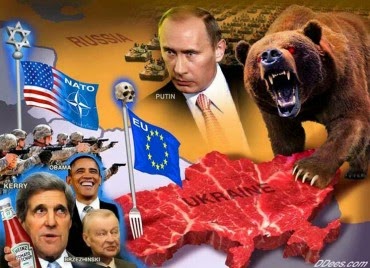 – German Security Expert Warns “War Between Russia And The West Is A Real Possibility” (ZeroHedge, Aug 28, 2014):

“The de-escalation strategy with Moscow has failed,” warns Joachim Krause, Director of the Institute for Security Studies, concluding ominously that “A war between Russia and the West… is a real possibility.” As Handelsblatt reports, Krause states “we should not deny this reality any longer.”

From Handelsblatt (via Google Translate),

The Director of the Institute for Security Studies at the University of Kiel, Joachim Krause, holding a war between Russia and the West for possible, the West should now not clearly show the flag in view of the escalating situation in Ukraine. “A war between Russia and the West, I do not wind up currently, but if the West will not respond with the necessary determination and effectiveness, a war in a few years could be a real possibility,” Krause told Handelsblatt Online.

The fact that Russia’s invasion takes place in the Ukraine a week before the NATO summit, show that Kremlin chief Vladimir Putin challenged the West generally. “We should set out and deny this reality any longer.”

“What we are experiencing these days, is an armed aggression of Russia against Ukraine,” Krause said. He referred to the aggression defined by the United Nations of 1974 Then was also to be considered “sending by or on behalf of a State of armed bands, groups, irregulars or mercenaries” as interstate aggression, “if this is of such gravity as to in its consequences a regular invasion equals “.

Thus, the policy of the federal government had failed to hold a de-escalation strategy which Moscow to intervene militarily in the Ukraine.

But, with with US equities a fraction away from all time highs, and just barely below 2000, shouldn’t there be no risk of any conflict according to the all-knowing market, which is never wrong?