– Half Of All Americans Live With Someone Dependent On Government Benefits (ZeroHedge, Aug 20, 2014):

More Americans than ever before are tapping government benefits. As WSJ reports,nearly half of Americans, 49.5%, lived in a household where at least one person was receiving some type of government benefit. Over the last few years, the number has mostly risen from more people turning to programs designed to help the poor, such as food stamps, Medicaid (the health-insurance program for the poor and disabled) and the Temporary Assistance for Needy Families program, commonly known as welfare. Welcome to Cloward-Piven’s socialist America… or as some might say “Mission Accomplished.” 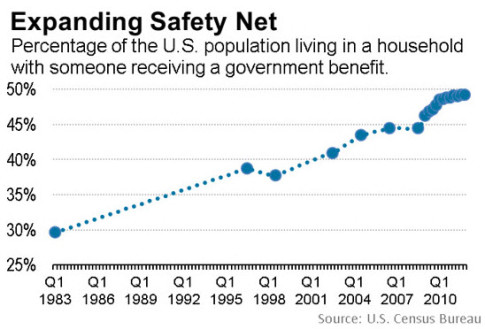 As we discussed previously, this may not be entirely by accident…

In the mid-sixties at the height of the “social revolution” the line between democratic benevolence and outright communism became rather blurry. The Democratic Party, which controlled the presidency and both houses of Congress, was used as the springboard by social engineers to introduce a new era of welfare initiatives enacted in the name of “defending the poor”, also known as the “Great Society Programs”. These initiatives, however, were driven by far more subversive and extreme motivations, and have been expanded on by every presidency since, Republican and Democrat alike.

At Columbia University, sociologist professors Richard Cloward and Francis Fox Piven introduced a political strategy in 1966 in an article entitled ‘The Weight Of The Poor: A Strategy To End Poverty’. This article outlined a plan that they believed would eventually lead to the total transmutation of America into a full-fledged centralized welfare state (in other words, a collectivist enclave). The spearpoint of the Cloward-Piven strategy involved nothing less than economic sabotage against the U.S.

Theoretically, according to the doctrine, a condition of overwhelming tension and strain could be engineered through the overloading of American welfare rolls, thereby smothering the entitlement program structure at the state and local level. The implosion of welfare benefits would facilitate a massive spike in poverty and desperation, creating a financial crisis that would lead to an even greater cycle of demand for a fully socialized system.

For those naïve enough to assume that Cloward-Piven is just a well intentioned activist method, it is important to understand that even if that were so, the effect of the Cloward-Piven Strategy will never achieve the goal its creators claimed to support. In my view, it is probable that they never really intended for it to produce wealth equality or an increased quality of life.

The tactic can only decrease wealth security by making all citizens equally destitute. As we have seen in numerous socialist and communist experiments over the past century, economic harmonization never creates wealth or prosperity, it only siphons wealth from one area and redistributes it to others, evaporating much of it as it is squeezed through the grinding gears of the establishment machine. Socialism, in its very essence, elevates government to the role of all-pervasive parent, and casts the citizenry down into the role of dependent sniveling infant. Even in its most righteous form, Cloward-Piven seeks to make infants of us all, whether we like it or not.