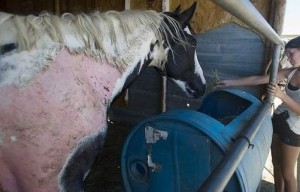 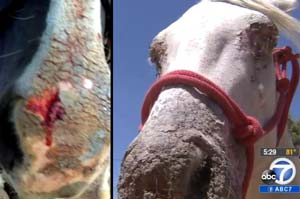 – TV: Devastating mystery illness hits California horses — “Nobody will even tell us what it is” — Skin falling off, covered in painful lesions, eyes swollen shut, liver damage, fainting — Expert: Never seen anything like it in 40 year career (PHOTOS & VIDEOS) (ENENews, Aug 15, 2014):

Kendall Melline, owner of sick horses: “It’s devastating… I’ve got my national champion, who her entire body, her entire first layer of skin is going to fall off.” […] She’s not seen any improvement in Bunny and is very concerned.

Melline: “Her eyes are swollen almost completely shut… I’ve heard about 70 other horses have come down with something like this.”

Stephanie Dorn, owner of sick horses: “I don’t know what this even is… She has mouth sores all over […] her lips are just swollen humongous… I’ve never seen anything like this… Nobody will even tell us what it is… it’s heartbreaking.”

Deborah Jasper, owner of sick horses: Four of her horses showed burns… one [has] high levels of protein in the liver, which may lead to organ damage… “This has been a nightmare.”

Press Enterprise, Aug 12, 2014: [Brian Cockerton’s] two horses had […] rashes and burn lesions […]  lesions spread over most of the horses’ bodies [and they’re] in pain. “It’s horrible […] dozens of cases [are] affecting horses in a widespread area of Southern California in at least the past 2 1/2 weeks. […] There may well be many more unreported cases, [an official] added. […] hair and skin – later began falling off in big patches [and one] fainted twice while being washed […] A farrier told Cockerton he hasn’t seen anything like it in 40 years of shoeing horses.

CBS, Aug 6, 2014: UC Davis tested the hay and it came back clean. They say it’s possible this was just an anomaly. >> Watch it here

Press Enterprise, Aug 12, 2014: Toxicologists have not definitively identified [anything in the horses’ food, said state official Dr. Kent Fowler], describing it as a “very odd occurrence.”

ABC News, Aug 4, 2014: Mystery at the Racetrack; 10 Horses Dead this Season — A growing mystery at one of America’s most popular horse tracks, Del Mar in Southern California. […] ‘Chattering Gambler’ died of an apparent heart attack, the tenth to die since the racing season opened at Del Mar 3 weeks ago. Three from natural causes […] “When you have ten horses dying, and can’t pinpoint one thing or another, it is a mystery.” […] These mystery maladies could be a public-relations nightmare for the track >> Watch it here

See also: Japan Newspaper: “Horses became weak and died, one by one, from an unknown cause” at farm in Fukushima

6 thoughts on “TV: Devastating mystery illness hits California horses — “Nobody will even tell us what it is” — Skin falling off, covered in painful lesions, eyes swollen shut, liver damage, fainting — Expert: Never seen anything like it in 40 year career (PHOTOS & VIDEOS)”