“A WSJ article about the contracting economy in Japan. It addresses everything but the truth………how can these writer lie so?
How do they keep their jobs? Or, perhaps this is how they do keep their jobs, lie…….”

Yes, they have to lie all of time to keep their jobs. Maybe I should better say that the truth is getting edited out all of the time and those journalists that don’t like it that way and do something about it can look for another job (other than being a journalist, because no other paper will employ them ever again).

This is a fact and has been exposed by many journalists from all around the world.

Were it not for Fukushima, Shinzo Abe would be destroying Japan single-handedly.

Japan is totally finished on so many levels it’s hard to believe. 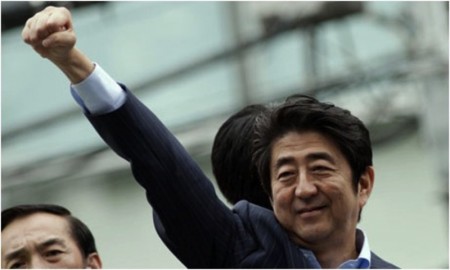 TOKYO—Japan’s economy contracted sharply in the second quarter after a sales-tax increase in April sent household spending tumbling, which economists said could pressure the government to take additional stimulus measures.

Real gross domestic product, the total value of all goods and services produced in the economy, shrank 6.8% in the three months through June on an annualized basis from the prior quarter.

That was slightly less than a 7.1% contraction forecast by economists surveyed by The Wall Street Journal, but economists said a larger-than-expected drop in private consumption and a sharp increase in inventories raised concerns about the resilience of Japan’s economic recovery.

A fallback in economic output was expected after the nation’s sales tax rose to 8% from 5% on April 1. Prime Minister Shinzo Abe and other policy makers have said they expect the downturn to be short-lived.

If that forecast proves too rosy, the government might have to compile more economic-stimulus measures and reconsider plans to raise the sales tax further to 10% in October 2015, economists said.

Investors should watch out for a risk that the domestic economy stays sluggish for longer than expected, said Yasunari Ueno, chief market economist at Mizuho Securities.

“The next focal point is how much the economy will rebound in the July-September period. If the upward pressure is weak, it will likely increase the chance that Prime Minister Abe decides in December to delay the next sales-tax hike,” Mr. Ueno said.

The economy expanded 6.1% in the first quarter, as households stocked up on big-ticket items such as washing machines before the sales tax rose.

Government officials were more sanguine about Wednesday’s data. Economy Minister Akira Amari said the figure didn’t change the government’s outlook that the economy continues to improve steadily. He said the government would respond flexibly on the economy but added that he didn’t currently see a need to compile an additional budget.

Many economists said they were concerned by the 5% drop in private consumption in the April-June quarter compared with the previous quarter. They said the sales-tax increase might be squeezing households because they are paying more for everyday goods but so far on average haven’t seen much increase in income.

Another worrying sign was the 1% increase in inventories on quarter.

“This doesn’t bode well for the July-September quarter,” said Yasuo Yamamoto, senior economist at the Mizuho Research Institute. “Inventory adjustments will be necessary, meaning production may not grow.”

Demand for exports has also been weaker than many economists expected despite a fall in the yen since Mr. Abe took power. Exports fell 0.4% on quarter in real terms, through external demand contributed 1.1 percentage points to growth in the April-June period as imports also fell.

Many Japanese companies now produce abroad. That explains why many of Japan’s large manufacturers such as car makers reported strong earnings in the second quarter despite lackluster demand at home.

There are signs, however, that the effects of the sales tax might be easing. Consumer confidence rose to 41.5 in July from 41.1 in June, according to government data released on Monday. That was the third straight month of improvement.