In what is certainly a historic, and quite stunning, market first, not to mention prima facie evidence that Janet Yellen was right about the biotech (and not only) bubble, last week the equity markets experienced something that has not happened in decades: a biotech firm went public, traded for six days, only to announce Friday that it would void its IPO and won’t issue shares after all, thanks to a key investor’s failure to follow through on a commitment to buy stock. In other words, days after going public, yet another darling of the momo bubble mania du jour, decided to undo everything, and went back to being private (and soon: bankrupt).

You read that right: a precommitted, fully underwritten offering, in which the underwriter took the risk, if only on paper, to absorb all the shares sold to the public even if “key investors” mysteriously fail to show up, decided to pull the switch on the party a week after said buyer decided to not make an appearance after all, perhaps because after IPOing at $12, the stock promptly tumbled and never regained its going public level. As the WSJ summarizes,  “all the investors who thought they had bought or sold shares in Vascular Biogenics Ltd. since it began trading hadn’t.“

Call it buyers’ remorse, or better yet, call it by its real name: yet another absolute mockery of the centrally-planned farce that the Fed has made modern, and quite broken, “capital markets” into.

WSJ has more on this absolute stunner: “The highly unusual cancellation of a deal days after the shares began trading is a black eye for lead underwriters Deutsche Bank and Wells Fargo and an unwanted headache for any buyer or seller of the stock. It also is a major setback for the money-losing biotechnology company, which had planned to use the proceeds of the $65 million offering to fund drug development.”

Vascular Biogenics, an Israeli drug-development company which hasn’t reported any sales in the 14 years since its inception and which said in regulatory filings this year that it faced a risk of running out of money, said Friday that its underwriters at Deutsche Bank and Wells Fargo had voided the IPO. In a 104-word statement, the company said an unidentified, U.S.-based Vascular Biogenics shareholder didn’t pay for shares it had agreed to purchase.

Needless to say at fault here are the underwriters who collect 3%-5% in fees on the total amount raised of any such transaction merely for the “privilege” of holding on to shares for a seconds or two, and then promptly reallocating shares to their preferred client accounts. This time they couldn’t even do that, when one of the committed buyers decided not to show up.

It could be considered a failure of the underwriters,” said Matt Kennedy, an analyst at Renaissance Capital, an IPO research-and-investment firm. Wells Fargo and Deutsche Bank representatives declined to comment. Vascular Biogenics didn’t respond to requests for comment.

“We’ve never seen anything like this happen before,” Renaissance Capital’s Mr. Kennedy said. “With the investor not transferring payment—I don’t think we’ve seen that.”

How has this scandal not attracted far broader attention? Simple: the company, prudently, went public using the JOBS act as cover, attracting as little attention as possible.

The deal proceeded with little fanfare or notice, and, on July 30, Vascular Biogenics announced it had sold 5.4 million shares to the public at $12 each, below the company’s expected pricing range. The shares tumbled as low as $9.02 after trading on the Nasdaq NDAQ -0.31%  Stock Market began July 31. They were halted Aug. 7 at $11.15. 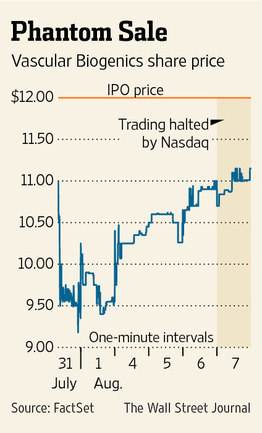 So what happened after the disappointing start to the company’s new life as a public entity?

On Friday morning, Aug. 8, the company said “no shares will be issued” under its registration with U.S. regulators, citing the failure of the unidentified shareholder, meaning the IPO and all subsequent trades would be canceled. Nasdaq, which listed the stock, notified traders at 1:28 p.m. Eastern time Friday that it had begun reviewing all trades in Vascular Biogenics.

On Monday, market officials began combing through trading records of the stock and contacting trading firms as they began to unwind the transactions and refund investors. Officials at the National Securities Clearing Corp., where stock trades are finalized, handled the unwinding process.

And while the IPO voiding is the fault of the underwriters, the question is who got cold feet and decided to not fund his share of the bargain. A few names emerge:

At least four pre-IPO investors agreed to buy shares in the offering, according to the prospectus. Among those was Jide Zeitlin, a director at Vascular Biogenics who is identified as president of New York investment firm Keffi Group Ltd.

Keffi owned 24% of Vascular Biogenics before the offering and would have boosted its stake to 30.6%, according to the prospectus—an increase that would have entailed buying more than two million shares in the offering.

“I have no comment, other than to say that we have extended ourselves and made every effort to support VBL,” said Mr. Zeitlin, who has served on the board since 2008.

What would they comment if they could be reached? “Yeah, stock crashed after IPOing, so I decided not to throw my money away”…

But while IPO voiding is indeed a historic event, it is not unprecedented: “Eagle Computer’s 1983 IPO was canceled when the company’s chief executive was killed in a car crash as the deal got under way. Eagle Computer refunded investors’ money and later held another IPO. Normandy America rescinded its 1995 IPO after a big price drop, said Jay Ritter, a finance professor at the University of Florida. He said two other deals, Mokan Productions in 1987 and Wilt Chamberlain Restaurants in 1993, were pulled after “a few days.”

As for Vascular, which has no revenue, and no likely other sources of funds unless it does a PIPE (good luck with that after an IPO debacle such as this one),this is likely lights out.

Vascular Biogenics said in its most-recent initial-offering documents that the continuing losses “raise substantial doubt about our ability to continue as a going concern.”

The company said completing the IPO as expected could give it financing for 36 months but cautioned that “our operating plan may change as a result of many factors currently unknown to us, and we may need to seek additional funds sooner than planned.”

So while this IPO fiasco is indeed a first for quite a few generations of traders, we certainly don’t expect it to be the last, now that the precedent has been set. In fact, as the avalanche of companies vying to go public squeezes into the capital markets, expect increasingly more of those who don’t go “CYNK” on the first day of trading, to quietly but quickly, unwind their IPO and the money of all those who had hoped to go from rags to riches on the latest “hot thing” to be refunded.

Actually, scratch the refund part: once exchanges are swamped in voing IPO after IPO they may just raise their hands and say “no more refunds.” That’s when things will get really fun…