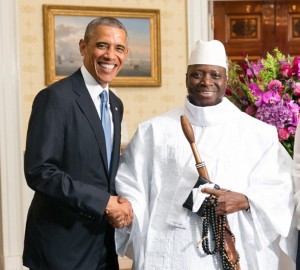 – Obama Wines & Dines Some Of The World’s Most Brutal Dictators At US-Africa Summit (Liberty Blitzkrieg, Aug 8, 2014):

Last month, I wrote an article highlighting the fact that President Barack Obama apparently had become so tired of being President that he decided to just hang out and socialize instead. The piece was titled, The New York Times Describes Obama – “A Restless President Weary of the Obligations of the White House…”

Apparently, Mr. Obama has found a middle ground. A perfect mix of dinner-party diplomacy with some of the world’s most violent and homophobic dictators. Introducing the first ever U.S.-Africa summit, which just ran from August 4-6th. As the Daily Mail points out, President Obama had no problem smiling and hobnobbing with a cornucopia of murders and human rights abusers. If there was a Hollywood celebrity hashtag campaign of outrage protesting the event, I must have missed it.

The Daily Mail highlighted several of the motley crew:

The red carpet was rolled out for Equatorial Guinea’s Teodoro Obiang Nguema Mbasogo, who shot or jailed virtually all his political opponents, Gambia’s Yahya Jammeh, who threatened to ‘cut off the head’ of any homosexuals in the country and for Cameroon’s Paul Biya, who has the dubious honor of ranking 19th on author David Wallechinsky’s 2006 list of the world’s 20 worst living dictators.

Pictured outside the White House waving and grinning with his wife President Obiang of Equatorial Guinea is Africa’s longest serving dictator after seizing power from his uncle and mentor (who used to hang regime critics from the capital’s street lights) in 1979.

Since then he has won the yearly elections with 99% of the vote. Taking the lead from his uncle, he has since had shot or jailed virtually all political opponents and ruled the country with an iron fist. Despite running one of sub-Saharas biggest oil-producing countries and amassing a personal wealth in excess of an estimated $600million, he’s far from generous with his riches.

The average income of his citizens is $2 a day, few live beyond 53 and 20 per cent of children die before they reach five years of age. Last year the country ranked 163 out of 177 on Transparency International. There is no freedom of the press, the country’s one television station is government-run and clean water is scarce. In 2011, the United States’ Department of Justice made moves to seize more than $70 million in assets from President Obiang’s son, Teodorin Nguema Obiang Mangue.

Gambian president Yahya Jammeh took power in a military coup in 1994. Although the coup itself was bloodless, in the 20 years since he has been accused of countless breaches of human rights. In 2008, he threatened to ‘cut off the head’ of any homosexuals in the country. The following year, it was reported up to 1,000 Gambians had been abducted by the government on charges of witchcraft – they were taken to prisons and forced to drink poison.

Goodluck Jonathan, president of Nigeria, signed harsh anti-gay laws this year. They criminalize gay relationships, being involved in gay societies and organizations and gay marriages. Violation of this law can result in up to 14 years in prison, with dozens of homosexuals already jailed. Jonathan also sparked major controversy over his decision in 2012 to end fuel subsidies. He is also accused of pardoning corrupt politicians.

Just remember this the next time a politician tries to get you enraged about a human rights abuse somewhere. There is always an ulterior motive, because without question, the U.S. only cares about human rights when it is geopolitically or economically advantageous to do so.