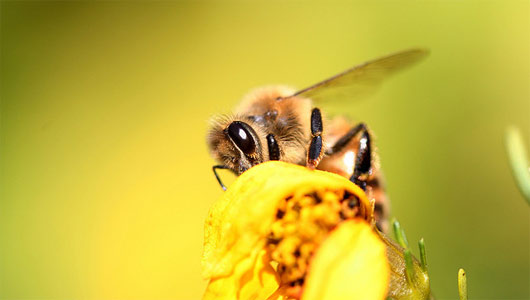 Recently I wrote about a large Canada-wide surveillance initiative: Look Who’s Behind This Large Study to “Help the Bees”. Following the money trail, one could see that Canada’s government was placing “hope” for an answer unto major international biotech and agricultural companies such as Monsanto, BASF, Bayer, Syngenta etc… The very same companies whose chemical products are implicated for diminishing bee populations and have everything to gain by “finding” an answer that doesn’t point back to them.

Does that seem like a gross conflict of interest to you?

It may or may not surprise you to know that similar shadow puppeteering is going on in the UK.

British MPs are “up in arms” saying that government bee research to boost pollinators is now tainted by corporate funding.

A report released today by Parliament’s Environmental Audit Committee critiques the government’s draft National Pollinator Strategy, which sets out plans to halt the decline in pollinating insects like bees.

The strategy was created by Defra (Department for Environment, Food & Rural Affairs). The list of consultees appears here. Whaddya know? On that list, among many Big Agri and Big Biotech interests, appears BASF, Bayer CropScience, and Syngenta. Also, the Crop Protection Association, of which Syngenta is a member.

Of course, the EAC critique would have come in handy back when Defra was asking for public comment by May 2014. Defra, by the way, opposed the EU’s temporary neonicotinoid ban, along with farmers and chemical companies like Bayer and Syngenta. The critique is basically asking Defra to accept the ban and stop trying to overturn it. Only three kinds of neonicotinoids were halted: thiamethoxam, clothianidin, and imidacloprid.

The Government’s draft National Pollinator Strategy envisages further research on the impact of pesticides on pollinators, but it needs to be transparent and subject to independent controls or it will not command public confidence, the Environmental Audit Committee warn. Some of this research will be paid for by pesticide manufacturers.

Will the EAC report and discussion result in some kind of concrete solution? More likely it will be yet another compromise or synthesis. A realist also says “no,” when he looks back on 50+ years of damning studies and sees not innovation – but decades’ worth of “chemical swaps.”

In reading the pendulum-like clamor in news stories on this topic, I didn’t hear anything about anyone actually stopping the corporate influence. Just outcry. A little foot-stomping. No repercussions. Just calls for more transparency – more research. What a wicked game…just like always.

When it comes to research on pesticides, Defra is content to let the manufacturers fund the work. This testifies to a loss of environmental protection capacity in the Department responsible for it. If the research is to command public confidence, independent controls need to be maintained at every step. Unlike other research funded by pesticide companies, these studies also need to be peer-reviewed and published in full.

That’s it? Asking the department responsible for the strategy to stop trying to overturn a ban on bee-killing pesticides and then calling for more transparency when they use funding from the corporations who made the banned chemicals?

So, as in Canada’s case, it is highly unlikely anything substantial will come of this problem or the resulting studies. The EU is poised to become more submissive to biotech, allowing them higher authority despite previous GMO bans and the public’s revulsion.

The true application of science would include innovation and an abundance of non-patentable solutions. That real pursuit of discovery doesn’t simply narrow the scope to “either” (chemicals) “or” (nothing).

1 thought on “Look Again: Who is Behind UK’s Initiative to “Help the Bees”?”