– GDP Deja Vu Stunner: Over Half Of US Growth In The Past Year Is From Inventory Accumulation (ZeroHedge, July 30, 2014):

Back in December 2013, when everyone was expecting a 3% GDP print for Q1, we did a simple analysis concluding that “Inventory Hoarding Accounts For Nearly 60% Of GDP Increase In Past Year.” We stated that this “hollow growth”, which is merely producers pulling demand from the future courtesy of cheap credit and assuming the inventory will be sold off in ordinary course of business without bottom-line slamming liquidations or dumping, and which further assumes a healthy US consumer and global economy, is a flashing red flag for the future of US economic growth. In fact, we were one of the very few who warned that Q1 GDP would be a disaster: “The problem with inventory hoarding, however, is that at some point it will have to be “unhoarded.” Which is why expect many downward revisions to future GDP as this inventory overhang has to be destocked.”

This is precisely what happened in Q1, however it was blamed on the “harsh weather.”

Alas, following today’s “spectacular” 4.0% GDP print following the predicted plunge in the US economy in Q1, we can again conclude that not only has nothing changed, but what we warned in Q4 of 2013 is about to happen all over again, and the inventory overhang (which incidentally was estiamted by the BEA and will certainly be revised lower next month) is about to slam future US growth.

The chart below shows the quarterly change in the revised GDP series broken down by Inventory (yellow) and all other non-Inventory components comprising GDP (blue). Something to note: companies are traditionally loath to liquidate inventories unless the economy is clearly in a depressionary collapse as happened in late 2008 early 2009, when inventory dumping was the main reason why GDP remained flat if not negative even as other GDP components rebounded. As such, it is always the last component of GDP to go, and when it does watch out below. 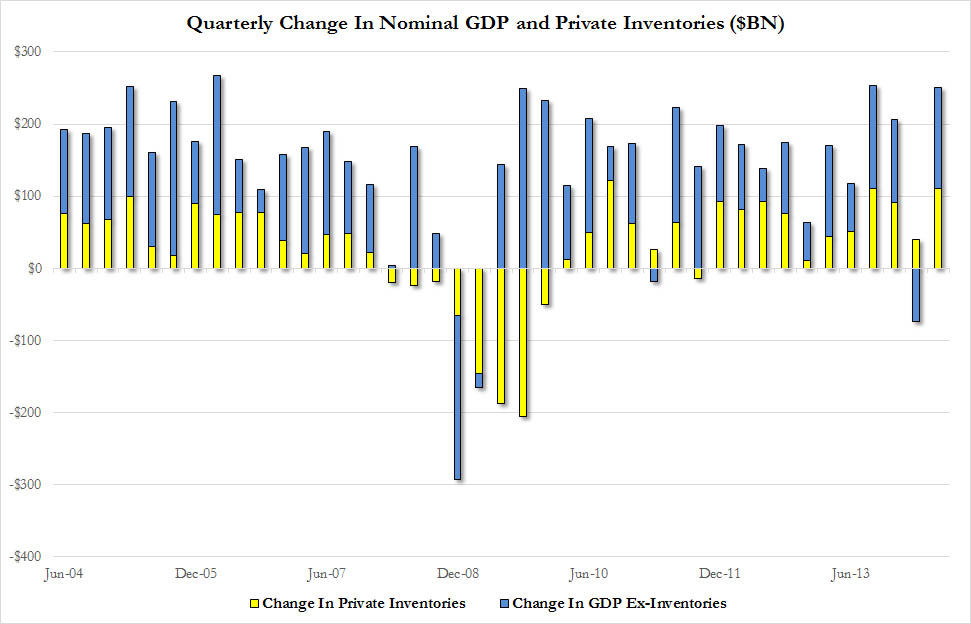 And, as we showed last time, where the scramble to accumulate inventory in hopes that it will be sold, profitably, sooner or later to buyers either domestic or foreign, is most visible, is in the data from the past 4 quarters, or the trailing year starting in Q2 2013 and ending with the just released revised Q2 2014 number. The result is that of the $675 billion rise in nominal GDP in the past year, a whopping 52%, or over half, is due to nothing else but inventory hoarding. 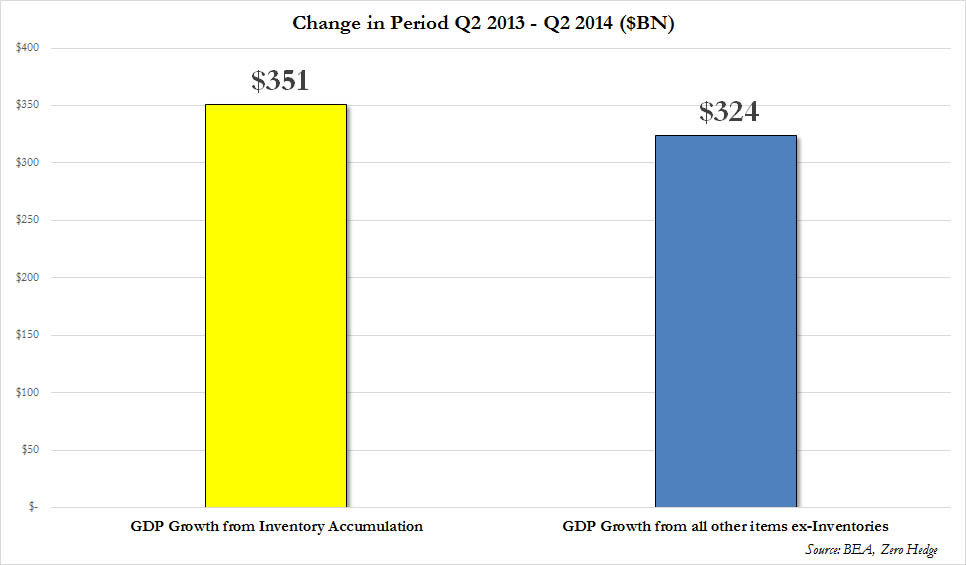 Once again, enjoy the sugar high that inventory accumulation always generates in the current quarter. Just don’t expect it to last.

2 thoughts on “GDP Deja Vu Stunner: Over Half Of US Growth In The Past Year Is From Inventory Accumulation”