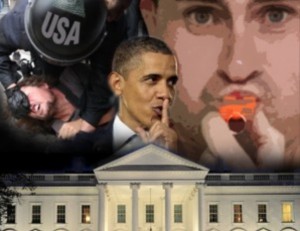 – The “Insider Threat Program” and the Government’s War on Whistleblowers (Liberty Blitzkrieg, July 24, 2014):

The Obama Administration’s Orwellian government employee snitch network, dubbed the “Insider Threat Program,” first made headlines about a year ago. I found it to be so disturbingly significant I wrote a post about it titled: The 3 Key Takeaways from the Ridiculous “Insider Threat Program.” Those 3 key takeaways were that it…

Fast forward a year, and it appears that several members of Congress are also becoming increasingly concerned. Some are starting to ask questions, but as usual, the “most transparent administration in history” is entirely nontransparent. We learn from the Washington Post that:

In early April, Sen. Charles E. Grassley summoned FBI officials to his Capitol Hill office. He said he wanted them to explain how a program designed to uncover internal security threats would at the same time protect whistleblowers who wanted to report wrongdoing within the bureau.

The meeting with two FBI officials, including the chief of the bureau’s Insider Threat Program, ended almost as soon as it began. The officials said the FBI would protect whistleblowers by “registering” them. When Grassley’s staff members asked them to elaborate, the FBI officials declined to answer any more questions and headed for the door.

The episode infuriated Grassley (Iowa), a leading advocate for whistleblowers in Congress and the ranking Republican on the Senate Judiciary Committee. Any effort to register whistleblowers, he said, would “clearly put a target on their backs.”

The Insider Threat Program and a continuous monitoring initiative under consideration in the intelligence community were begun by the Obama administration after the leaks of classified information by former NSA contractor Edward Snowden and Army Pvt. Chelsea Manning, and the Navy Yard shootings by Aaron Alexis, who used his security clearance to gain access to the base.

The programs are designed to prevent leaks of classified information by monitoring government computers and employees’ behavior.

Grassley said the episode with the FBI illustrates how federal agencies are setting up internal security programs without giving careful consideration to whether they could dissuade whistleblowers from coming forward.

“The Insider Threat Program has the potential for taking the legs out from underneath all of the whistleblower protections we have,” Grassley said in a recent interview.

Greg Klein, the head of the FBI’s Insider Threat Program, and McDonough, the congressional affairs agent, did not return calls seeking comment. An FBI spokesman said the bureau does not plan to register whistleblowers. He said there was a misunderstanding about the nature of the briefing with staff members for Grassley, Judiciary Committee Chairman Patrick J. Leahy (D-Vt.) and a law enforcement official who is assigned to the Senate panel. The spokesman noted that the FBI has a whistleblower training program for employees and a whistleblower protection office.

Of course not. Why would a federal police force have to answer to Congress or the media? It’s not like this is a democracy or anything.

Furthermore, of course there was a “misunderstanding,” your representatives stormed out of the meeting like petulant toddlers.

Grassley is part of a growing chorus of lawmakers on Capitol Hill and attorneys for whistleblowers who warn that the Insider Threat Program and the potential intelligence community initiative threaten to undermine federal workers’ ability to report wrongdoing without retaliation.

Together, the programs cover millions of federal workers and contractors at every government agency.

“I think it’s time to put up the caution light here,” said Sen. Ron Wyden (D-Ore.), a member of the Senate Intelligence Committee.

“This really has the potential for abuse, and I think it could have a chilling effect on the public’s right to know and effective oversight of our government,” Wyden said.

“These agencies have long treated whistleblowers as security threats and this makes things even worse,” said German, now a senior national security fellow at the Brennan Center for Justice at New York University School of Law.

As I have maintained time and time again, what is clear since the Edward Snowden revelations is that the government has zero interest in reining in these programs. It merely wants to make sure the public can never learn about government criminality in the future. Hence the aggressive “war on whistleblowers.”