As if Ukraine was not struggling through enough turmoil currently, Bloomberg reports that the fragile coalition government has collapsed after two parties quit. The UDAR and Svoboda parties said they’d leave the government and seek a snap parliamentary ballot. Tempers have been fraying recently as numerous brawls have broken out in parliament ahead of President Poroshenko’s pledge to call elections this year. All we have to do now is find out who Washington would like to see in power? The end result: Prime Minister Yatsenyuk just resigned. The big question now is what will the IMF do about the remaining tranches of its loans? Via BBG:

How The Ukrainian government has settled these problems in the past.

The UDAR and Svoboda parties said they’d leave the government and seek a snap parliamentary ballot, according to statements today on their websites. Under the constitution, the former Soviet republic has 30 days to form a new coalition or it must call early elections. The existing cabinet will remain in place in the meantime.

“We will probably have snap parliamentary elections at the end of October,” Yuriy Yakymenko, the head of political research at the Razumkov Center, said by phone from Kiev today. “This option was probably agreed on by political parties seeking elections and the president.”

The government and the current parliament will keep working until new institutions are formed, he said. Olga Lappo, Yatsenyuk’s spokeswoman, declined to comment when reached by phone today.

Ukrainian bonds are tumbling on the news… 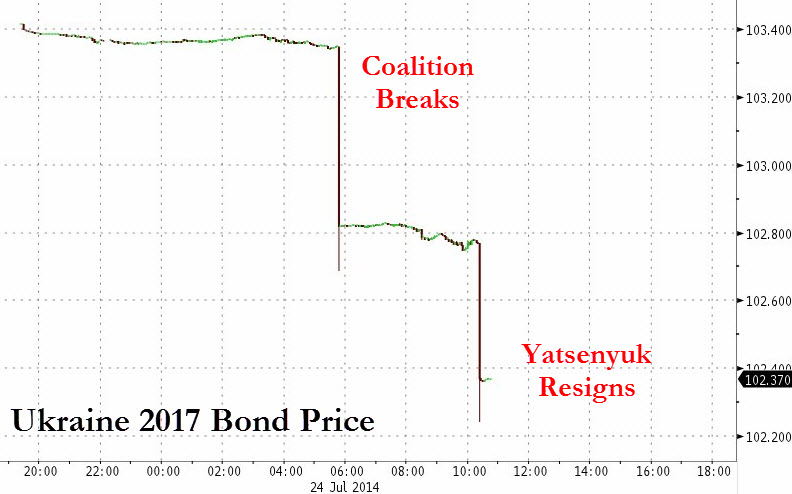