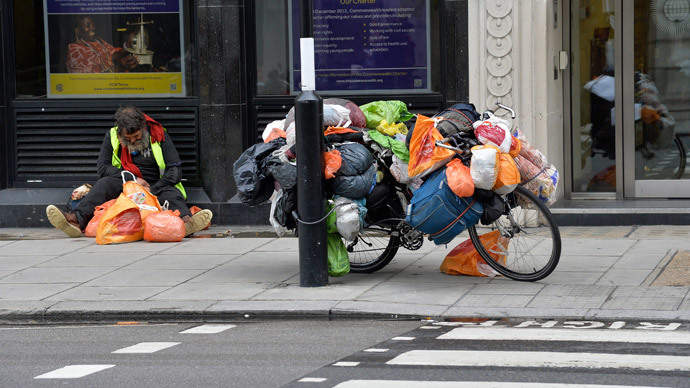 Welfare cuts and pressures on household budgets is driving people to the brink of homelessness, a leading UK charity has warned.

Shelter, a charity that campaigns against homelessness, says it can no longer keep up demand for its helpline after calls increased by 20% since 2011. As a result, almost a third of phone calls go unanswered.

It warned that people were living on a ‘knife edge’ as losing a job or falling sick could tip them into homelessness.

“As more people come to us desperate for support, sadly our helpline is also being stretched to its limits” Campbell Robb, Chief Executive of Shelter, said in a statement.

Most of the calls come from families struggling to pay their rents or keep up with their mortgages as wages decline in real terms.

“Every 11 minutes, a family in Britain loses their home. With more and more people having to stretch their finances to breaking point in a bid to makes ends meet, it’s not hard to see why” Robb added.

While there is no national figure on the number of homeless people in the UK, government statistics suggest that 2,414 people slept rough in any one night during 2013, with more than 6,000 cases being in London alone.

A poll commissioned by YouGov last year also showed that 8.6 million Britons would be unable to pay their rent from savings, and were at risk of eviction, while the Office of Budget Responsibility warned that up to 2 million British families were facing a personal debt crisis by 2018 if interest rates were to increase.

Last month, a council in a posh area of London was heavily criticised on social media for using metal spikes to deter homeless people from seeking refuge outside residential flats.

The spikes were later removed after Mayor Boris Johnson called them ‘ugly’ and ‘stupid’.