A month ago we mapped the current state of the Ebola crisis in Africa, which has claimed over 600 lives in recent months, and which according to the director of operations of medical charity Médecins Sans Frontières, Bart Janssens, has grown into an “epidemic which is totally out of control.” He added that “Ebola is no longer a public health issue limited to Guinea: it is affecting the whole of West Africa,” urging WHO, affected countries and their neighbours to deploy more resources especially trained medical staff.

Tragically, the “out of control” epidemic has taken a major turn for the worse when the head doctor fighting the Ebola epidemic in Sierra Leone has himself caught the disease, the government said. 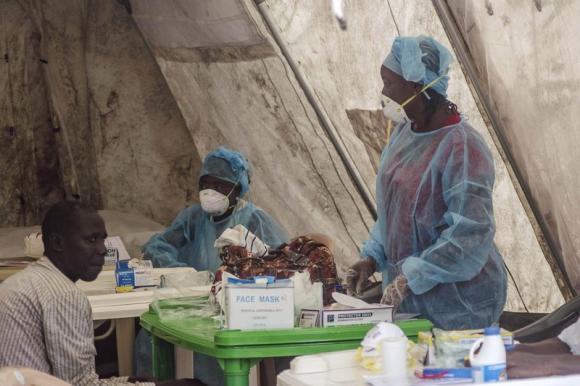 According to Reuters, the 39-year-old Sheik Umar Khan, hailed as a “national hero” by the health ministry, was leading the fight to control an outbreak that has killed 206 people in the West African country. Ebola kills up to 90 percent of those infected and there is no cure or vaccine.

Khan, a Sierra Leonean virologist credited with treating more than 100 Ebola victims, has been transferred to a treatment ward run by medical charity Medecins Sans Frontieres, according to the statement released late on Tuesday by the president’s office.

Health Minister Miatta Kargbo called Khan a national hero and said she would “do anything and everything in my power to ensure he survives”.

Khan told Reuters in late June that he was worried about contracting Ebola. “I am afraid for my life, I must say, because I cherish my life,” he said in an interview, showing no signs of ill health at the time.

“Health workers are prone to the disease because we are the first port of call for somebody who is sickened by disease. Even with the full protective clothing you put on, you are at risk.”

The tragic escalation was not limited to Khan: three days ago, three nurses working in the same Ebola treatment centre alongside Khan died from the disease.

The only good news, if any, is that even as the epidemic which has raged for months, and now appears to be out of control, it has not spilled out of Africa into other continents yet. On the other hand both the US and now China appears to have a problem with a different viral scourge: bubonic plague. In any event, a deadly viral breakout across three continents may be just what the Keynesian doctor ordered to blast the global economy into that long-delayed “recovery.”