Remember when the extremist Al Qaeda spinoff ISIS (or, now known as Islamic State following the formation of its own caliphate in the middle of Iraq and Syria) was still a “thing” two weeks ago? In this case out of sight does not mean out of mind, and while the world has found a new story line to follow in the middle east with the war between Israel and Gaza, now in its 14th day – whenever it is not busy responding to emotional appeals about the MH 17 crash – ISIS has continued to expand and as Al Arabiya reports it “is now in control of 35 percent of the Syrian territory following a string of victories, the London-based Syrian Observatory for Human Rights said Friday.”

What’s more troubling is that ISIS holdings now include nearly all of Syria’s oil and gas fields. While these are hardly significant on a global scale, they certainly allow ISIS to preserve its self-sustaining and self-funding status.

One of the latest gains of the self-proclaimed “caliphate” was the seizure of the country’s biggest oil fields, in Deir el-Zour in eastern Syria, earlier in the week.

Deir Ezzor borders Homs province as well as Iraq, where the jihadist group has spearheaded a major Sunni militant offensive that has seen large swathes of territory fall out of the Baghdad government’s control.

The London-based group described Thursday’s takeover of the Shaar field as “the biggest” anti-regime operation by the ISIS since it emerged in the Syrian conflict a year ago.

“Eleven of the dead were civilian employees, while the rest were security guards and National Defence Forces members,” he added.

The Syrian government did not officially confirm the deaths, but supporters of Assad posted photographs of the dead, and described their killings as a “massacre”.

Ironically, it only took ISIS a little over a month to take over Syria’s energy infrastructure and cripple the Assad regime, something the US forces were unable to do last summer.  Perhaps it is time for the Pentagon to retain them, i.e., al-Qaeda 2.0, as mercenaries?

As for ISIS in Iraq, things continue to escalate and as the Institute for the Study of War reports, ISIS has placed IEDs in places such as Mada’in, Yusifiyah, and Mahmudiyah in the southern belts of Baghdad. Iraqi Shi’a militia executions inside Baghdad may increase in response to the VBIED wave in Shi’a neighborhoods on July 19. The deployment of volunteers from southern Iraq to Kirkuk province signifies the spread of their role to protect shrines in areas where ISIS is making advances. The reallocation of Iraqi security forces from Baghdad to Dhuluiya signals the real challenge that ISIS poses there.

ISW’s conclusion is that ISIS may try to draw the ISF out of Baghdad in advance of more robust attackes there.

Visually, here are the latest areas of conflict in Iraq. 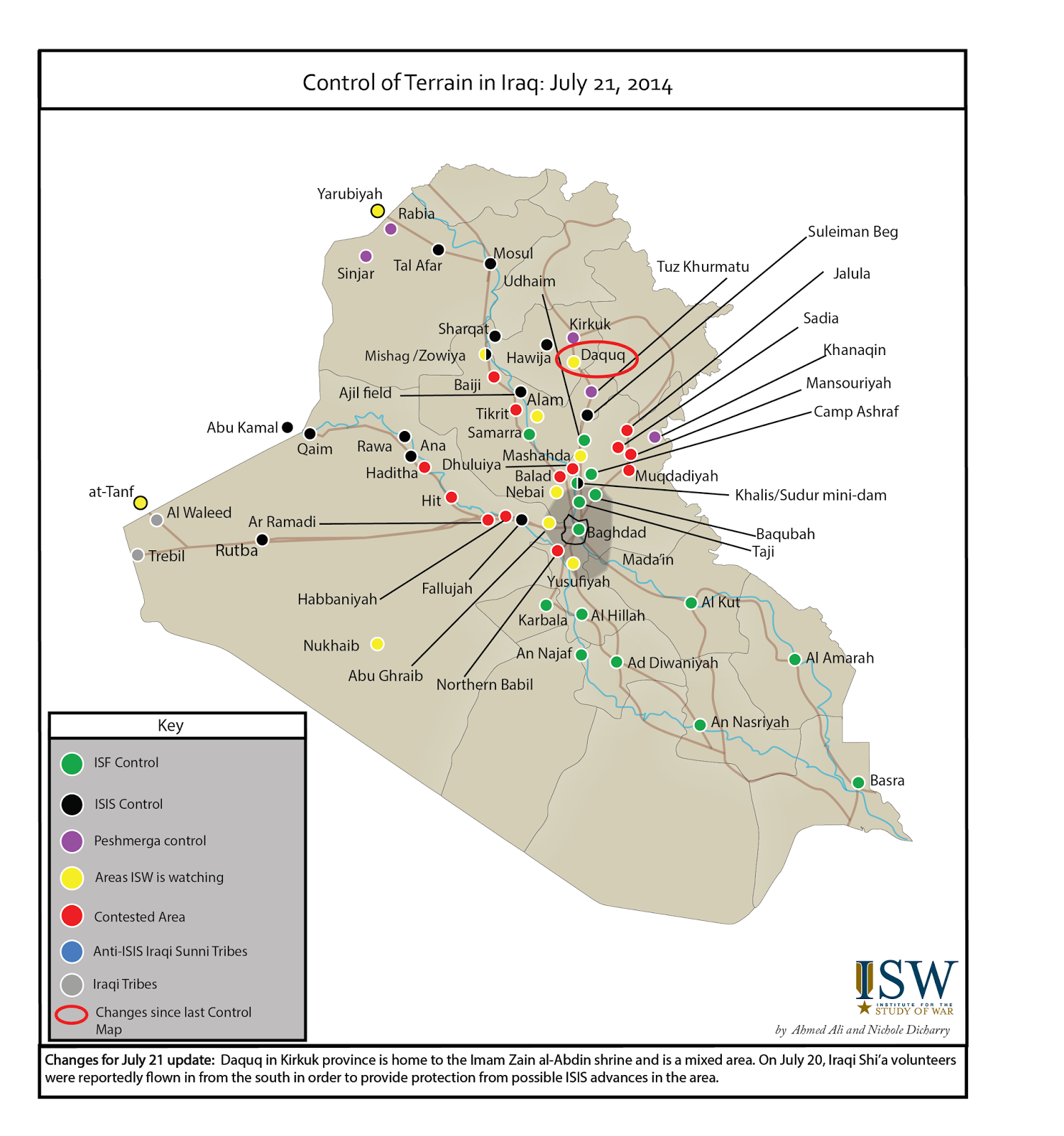 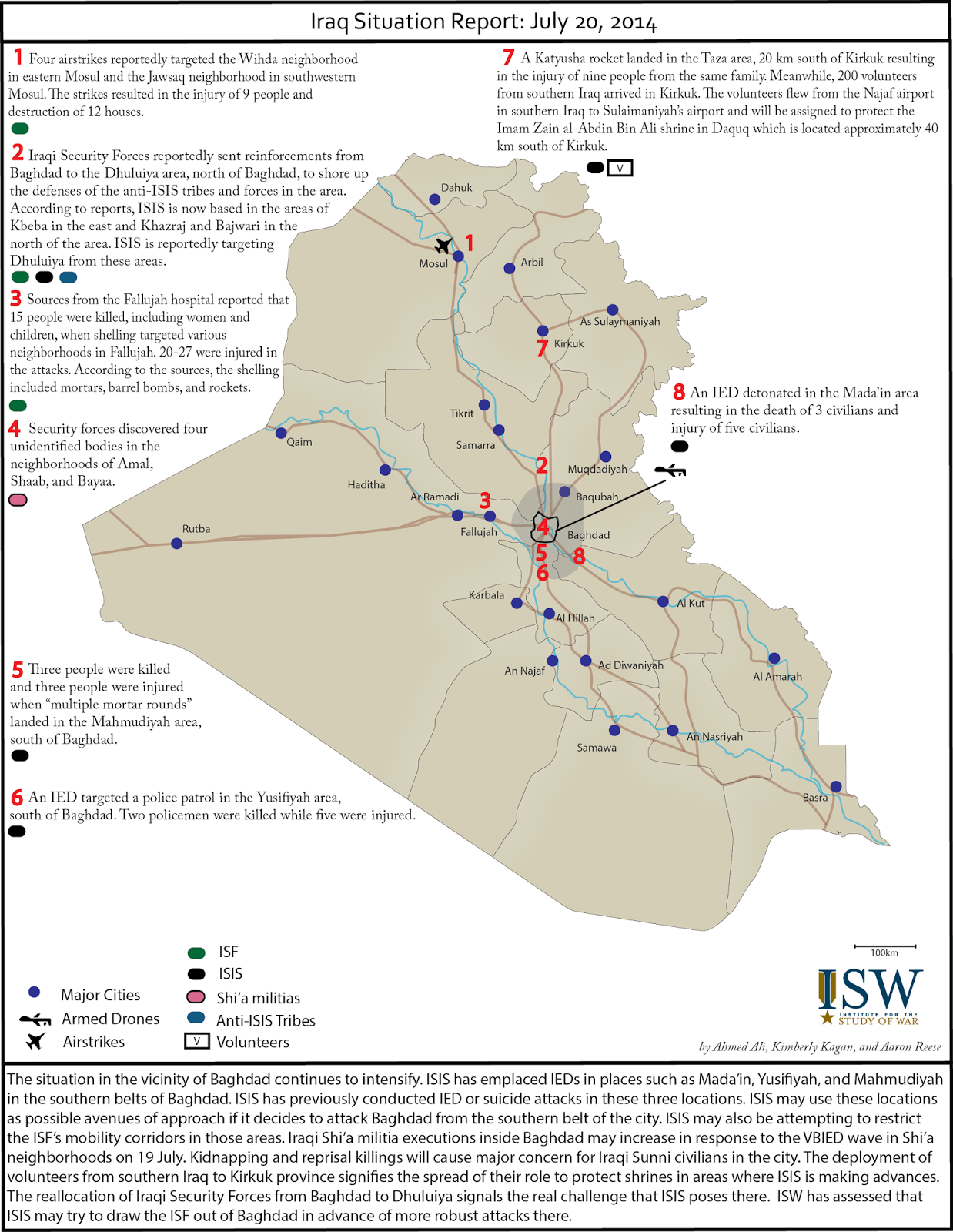 Perhaps sensing the fact that the tide of war may be shifting for the worse, Iraq has become increasingly more vocal in demanding US assistance and a few hours ago went as far as to issue an ultimatum on the US – help us now or we will find another bigger borther, one who will actually help us.

Bloomberg reports that earlier today, speaking at the Atlantic Council, the Iraqi Ambassador to U.S. Lukman Faily called for US air strikes warning that Iraqis are skeptical about U.S. intent to support Iraq in its fight against Sunni terrorist groups, and implicitly threatening that “other countries will step in to fill the vacuum if greater American support isn’t forthcoming.”

He also said that Iraq has chosen the U.S. as its preferred strategic partner, has bought >$10b in U.S. military equipment and plans “to buy billions more.”

“If Iraqis do not believe meaningful U.S. assistance is forthcoming, they will not have enough incentives to adopt political reforms. Now more than ever the United States needs to be careful not to send mixed signals about its intentions. These mixed signals will create vacuum that will be filled by others.”

As for Iraq, in the future pick better “preferred strategic partners.”

2 thoughts on “With ISIS Now Controlling 35% Of Syria And Most Of Its Oil Fields, Iraq Issues An Ultimatum To The US”