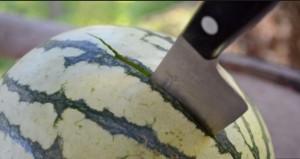 As is typically the case with posts on Liberty Blitzkrieg, the reason for highlighting this story is to see it in the context of other cultural trends happening within society. One of my biggest themes in 2014 has to do with the aggressive manner in which “authorities” relentlessly pursue average citizens for the most insignificant of infractions, while the most dastardly and destructive of criminals (financial oligarchs and others) receive, at worst, a slap on the wrist. Some of the more egregious examples of this behavior can be found below:

Charleston Man Receives $525 Federal Fine for Failing to Pay for a $0.89 Refill

Before I get into the case of the so-called “Melon Felon,” I’d like to highlight a recent story where Dallas Northington, a plain-clothes security officer at Target, was fired for reporting that a police officer was shoplifting from the retail giant.

Dallas Northington spent nearly eight years working for Target in loss prevention, roaming the stores and scanning the surveillance cameras. In an episode at the Leesburg Target store in May that he said was typical, a man was allegedly captured twice on video shoplifting, and Northington responded as he said he always did: He called the Leesburg police, made a report and provided them the videos of the two incidents.

But the man in the video may have been a Fairfax County sheriff’s deputy, Northington said he soon learned. And within days, two things happened: The deputy retired from the sheriff’s office and Target fired Northington, 29, a married father of two with a third child on the way.

But the man Northington said he and his supervisors identified as a deputy has not yet been charged with a crime though Northington said he had provided the man’s name and two color videos of him in action, his face clearly visible, to Leesburg police on May 27, the date of the second incident.

See how this works? If you are an average pleb and you don’t pay for a soda refill, your life can be instantly destroyed. However, if you are a police officer you can steal without consequence. Even better, the person that reported you can have his life destroyed, despite 8 years of loyal service to his employer.

Now, on to the man arrested for cutting up a watermelon in a menacing fashion.

The Register Citizen first reported on the story Monday and wrote:

A Thomaston man is accused of stabbing a watermelon with a butcher knife and leaving it in the kitchen for a woman to see, in what police describe as a “passive aggressive” swipe that landed him in custody. She was unnerved by what she perceived to be a menacing gesture directed at her and reported it to police.

Initially, the woman came to police headquarters the morning of July 4 to report finding a plastic bag of marijuana and a pill container — with her name — which had Percocet and an unidentified blue pill inside. It was hidden in Cervellino’s tool box, she told police.

She snatched them up, took pictures with a cell phone camera and stowed them away in her room. Later, when the woman returned home, she found the drugs missing, she claims, but she showed police the photos. Cervillino is not facing any drug charges.

The woman returned a second time and was greeted by the sight of a watermelon, pierced by Cervillino’s large butcher knife, sitting on the kitchen counter top, police said.

Cervillino walked in seconds later, and without saying anything, began slicing pieces of the watermelon. The woman snapped a picture of the knife and turned it over to police.

As someone who recently cut up a whole watermelon, the above seems eerily familiar. While none of us really knows what is going on between these two people, it does seem like she has it out for him. First, taking pictures of drugs and bringing them to police, and then the taking a picture of a knife used to cut a watermelon? These are things you’d think two adults could deal with on their own without involving police.

The Register Citizen followed up the initial report with some additional details:

A Thomaston man’s arrest last week for stabbing a watermelon in a “passive aggressive” manner has thrust his family and the arresting police department into the national spotlight.

Since news of 49-year-old Carmine Cervellino’s arrest was reported by The Register Citizen on Monday, Thomaston police have been bombarded by more than a dozen calls from media across the country wanting an answer to the same question: How did police convince a state prosecutor and a judge to sign off on an arrest warrant application that considered carving a piece of fruit criminal “threatening?”

I mean, it is Connecticut.

In doing so, police relied heavily on an account from the victim, who said she felt Cervellino was trying to “intimidate” her when she returned home July 4 and saw a watermelon on the kitchen counter with a butcher’s knife in it.

Seconds later, Cervellino walked into the room and silently began slicing the watermelon.

The woman originally went to police after she claimed she found marijuana and Percocet in Cervellino’s toolbox. She snapped photos and showed them to police, but without finding drugs, police couldn’t charge him.

Still, Campbell said police gathered enough information to move forward with an arrest for threatening, despite never interviewing Carmine Cervellino or other witnesses.

Campbell was careful to say the woman never accused Cervellino of physically accosting her.

“We look at the totality of the circumstances,” Campbell said. “Our job is to intervene in these … matters. We felt there was probable cause.”

A Cervellino family member said Wednesday he was not unsettled by the sight of the watermelon in the kitchen. He said Cervellino just hadn’t had an opportunity to cut it up for a picnic.

With all that in mind, let’s talk about the fact that the SEC has discovered rampant criminality throughout the private equity industry and has decided to essentially do nothing about it. The New York Post reports that:

Pension funds and other big investors know that half of private-equity fund managers are ripping them off. The trouble is, they don’t know which half.

While the Securities and Exchange Commission has promised to pull back the curtain on PE industry, the agency won’t name misbehaving fund managers in an upcoming report on bogus fees and other PE shenanigans — rankling investors in those funds.

The SEC’s refusal to name names is all the more galling to pension funds because its chief, Mary Jo White, has talked tough about the need for greater transparency in the financial industry.

Oh, but here’s the best part:

An SEC spokeswoman defended the agency’s decision to keep the names of individual funds and their managers private.

“We don’t provide the results of the examinations because they are not public,” the spokeswoman said. “It’s not like a lawsuit when you mount a defense. It’s an exam.”

She added that the agency would take steps to bring individual firms into compliance or, if necessary, report them to the agency’s enforcement division.

“In some cases, we will send a deficiency letter to the firm,” she said. “Or in a very bad scenario, we will refer the case to the enforcement division for an investigation.”

Got that serfs? In a “very bad scenario” Wall Street titans might have to deal with the enforcement. So the SEC will ask private equity firms to please stop. If not, it might refer to enforcement division. But we need to throw Martha Stewart in the slammer. Banana Republic.

I think the following tweet best sums up my sentiments today:

Whoever took the plane down should turn themselves in to DOJ for a deferred prosecution and settle without “admitting guilt.” #bankerjustice