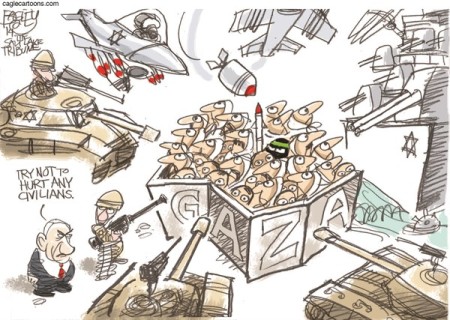 While the world’s attention is focused on the tragic events in Ukraine, the fighting in Gaza has entered its 13th, and most deadly day, with at least 50 Palestinians killed on Sunday by Israeli shelling in a Gaza neighborhood, where “bodies were strewn in the street and thousands fled for shelter to a hospital packed with wounded, witnesses and health officials said.” Reuters reports that the mass casualties in Shejaia, in northeast Gaza, were the heaviest since Israel launched its offensive, since expanded to a land offensive including tanks and troops. This has brought the total dead count on the Gaza side to over 400. According to elderly locals, today’s Israeli shelling was the fiercest they had seen since the 1967 Middle East war, when Israel captured Gaza. Shifa hospital’s director, Naser Tattar, said 17 children, 14 women and four elderly were among the 50 dead, and about 400 people were wounded in the Israeli assault.