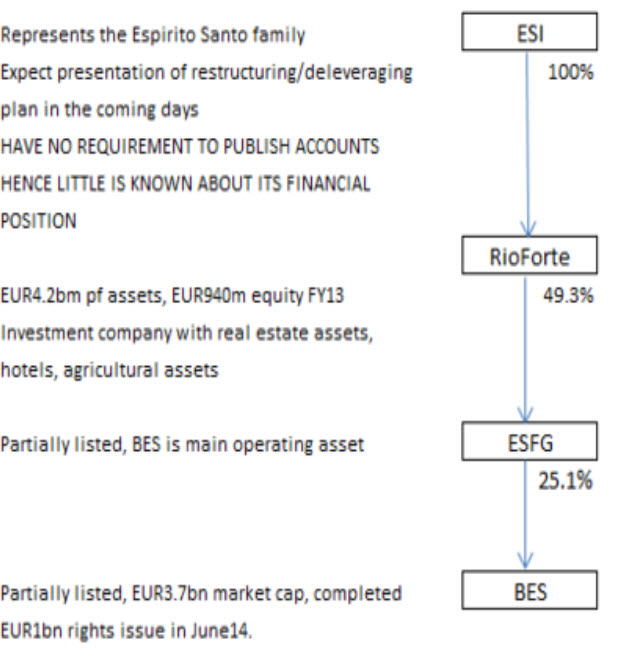 The good news: as every single European bank “expert” predicted last week when scrambling to avoid a panic, there is no fear of contagion. Aside from this one of course. Remember: there is always only one cockroach.

The full report from Reuters:

Rioforte, a holding company of Portugal’s troubled Espirito Santo banking clan, is preparing to file for creditor protection, sources familiar with the matter said on Tuesday, hours before Rioforte was due to repay over $1 billion in debt to Portugal Telecom. The filing will be made with a court in Luxembourg, where Rioforte is registered, one source close to the process said, adding that the filing is aimed at preventing insolvency that would entail uncontrolled asset sales at any price.

The timing of the filing depends on lawyers working on it in Luxembourg, the sources said.

Rioforte holds assets ranging from real estate and hotels to farming and healthcare in Portugal and around the world, as well as a 49 percent stake in Espirito Santo Financial Group – the largest shareholder in Banco Espirito Santo.

Another source said recent market turmoil, in which investors dumped BES shares and other Portuguese assets, prevented Rioforte from going ahead on its own with previously-planned debt restructuring and asset sales. Rioforte owes a total of 897 million euros to the country’s largest telecom services provider, Portugal Telecom, currently in the throes of a tie-up with Brazil’s Grupo Oi , which is likely to amend the terms of the deal in the event of a default.

Needless to say, Portugal Telecom is also sliding now. Because there is no risk of contagion whatsoever!

And now back to Janet Yellen confirming to the entire world the Fed has totally lost it.

1 thought on “The Next Domino: Espirito Santo Holding Company Preparing To File Bankruptcy”