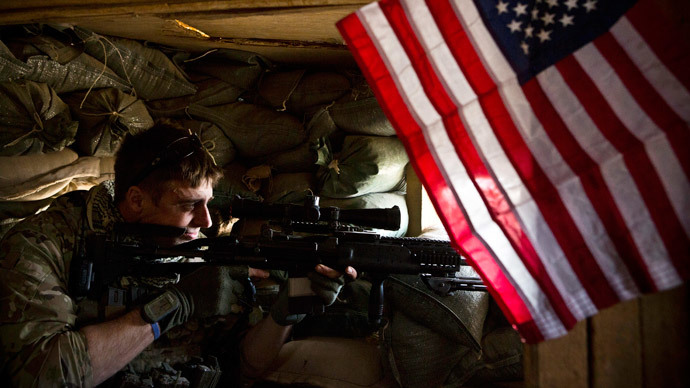 While the exact technologies used remain classified, an automatic aiming rifle consists of two parts – a guidance system and the bullet. The first tracks the target, meaning that the sniper simply has to “see” it with a with a sophisticated optical sight, and send signals to the bullet. With a number of fins and an on-board computer, the bullet – which may also calculate air pressure – constantly re-adjusts its path to home in on the target. To make rapid fire even simpler, it may simply react to any heat or movement near the target area, in what is known as “fire-and-forget.”

In 2012 another government researcher, Sandia National Labs, tested its own guided bullet, and claimed similar accuracy and distance results for it, though it uses a laser beam for targeting – which could make it less useful in smoky or foggy weather conditions, as well as being easier to spot for the enemy.

Currently, US Army snipers are expected to hit a target 600 meters away, nine times out of ten. But after a certain point, about a kilometer away, accuracy falls off sharply, even in perfect conditions. Besides, current technology simply does not allow snipers to easily estimate the impact of humidity and cross-winds on the bullet trajectory, meaning that even the best will often have to fire several bullets before they even get close – ruining the surprise factor, and placing themselves in danger of return fire. EXACTO promises a range of up to 2,000 meters, as well as a virtual indifference to conditions.

DARPA – the Defense Advanced Research Projects Agency – has, almost as a part of its experiment-oriented brief, a mixed track record on delivering practical and widely-used innovations. But if its brief for this project – which specifies that a rifle must use standard size ammunition and not be heavier than current rifles – is fulfilled, then it may bring about the biggest revolution in sniping since telescopic sights came into use in the middle of the 19th century.

And the US Army is genuinely relying on this project.

As its tactics have evolved from head-on combat to tactical missions against small groups of insurgents in treacherous terrain – in which loss of American lives must be minimized – so the number of snipers has risen. According to Time magazine, there were 250 in the entire army before the Iraq war, and that number more than trebled at the peak of the simultaneous US operations abroad. While overall military capacity may decrease in the coming years, with the Obama administration keen to avoid being trapped in unwinnable regional conflicts, the role that snipers will play will only grow.

While the success of the DARPA program may fill the corridors of the Pentagon with cheer, as with any improvement that increases the potency of easily-available weapons (EXACTO could even be fitted onto an ordinary rifle), it has its own risks. The US Army is not likely to make EXACTO available to civilians, but the technology will filter down and spread abroad, and Sandia National Labs has already announced that it plans to make its system commercially available. And while military innovation is necessary, the US will no doubt be worried about seeing rifles that can hit from 2km away, wielded by untrained foreign militants and disturbed American gunmen in the near future.