As most Fed watchers know, last week was interesting because Janet Yellen, speaking at IMF came out and said something quite surprising.  In a nutshell, she said “It’s not the Fed’s job to pop bubbles”.   While many market participants immediately took this to mean, “To the moon, Alice!” and started buying equities hand over fist, there’s another possible explanation for Mrs. Yellen’s proclamation of unwillingness:  The Fed could be preparing to do exactly what it said it wouldn’t.

Here’s a quick re-cap of events:  In the recently released Annual Report of the BIS: Bank for International Settlements  (commonly thought of as the “central bank’s central bank”) the BIS made a rather ominous recommendation to it’s member banks: Pop this bubble now.   Their specific language wasn’t quite so direct, but the message was just as clear.

The risk of normalising too late and too gradually should not be underestimated… The trade-off is now between the risk of bringing forward the downward leg of the cycle and that of suffering a bigger bust later on .

Few are ready to curb financial booms that make everyone feel illusively richer. Or to hold back on quick fixes for output slowdowns, even if such measures threaten to add fuel to unsustainable financial booms,” …

“The road ahead may be a long one. All the more reason, then, to start the journey sooner rather than later.”

As we noted last week, there are a couple of fascinating things to note about this recommendation.   First, for anyone who thinks that the concept of intentionally crashing the stock market is the stuff of conspiracy theorists, that notion is now dead and buried. It’s extremely clear from the BIS’ language, that the concept of initiating a collapse is openly discussed as a policy measure.   This was a direct recommendation to bring on the crash – or as they say so colorfully, to “bring forward the downward leg of the cycle”.

But what else is fascinating is that just days after the BIS report was released, Janet Yellen seemed to counter the BIS in her presentation to the IMF:

“At this point, it should be clear that I think efforts to build resilience in the financial system are critical to minimizing the chance of financial instability and the potential damage from it. This focus on resilience differs from much of the public discussion, which often concerns whether some particular asset class is experiencing a ‘bubble’ and whether policymakers should attempt to pop the bubble. Because a resilient financial system can withstand unexpected developments, identification of bubbles is less critical.”

What Yellen seemed to be saying — quite possibly in direct response to the BIS’s recommendations —  is that the Fed isn’t in the business of popping bubbles, nor does it see a reason to intervene in their development.

So to summarize:  The BIS publicly recommended popping the bubble now… and Yellen said no.

So what’s going on?

We could take all of this at face value if we chose:  The BIS playing hawk, and the Fed playing dove.  And that might well be the case — as to some extent Yellen is still something of an unknown entity.

But there is one more twist to the puzzle:  Yellen has openly stated that she would not be offering clear guidance to the market as her predecessor had advocated.  The age of Fed-glastnost is apparently coming to an end.

So indulge us for a moment as we present another possibility:

Yellen is going to orchestrate a controlled collapse.  Or, at least one which we hope is controlled.

There are political considerations to be made, however:  The Fed, which has not only come under intense fire for overt market manipulation, but which is also deeply concerned with market perception, simply cannot afford to be perceived as an instrument of the market’s collapse.   To be seen as the instigator of a crash could do irreparable harm to the institution. 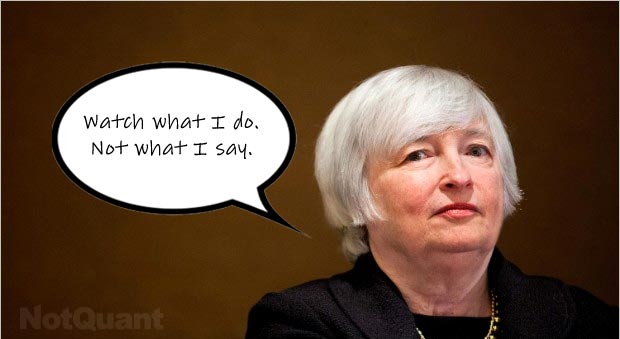 So just maybe the Fed fully intends on heeding the advice of the BIS, and is strategically positioning itself as a stalwart dove to shield itself from the public fallout of it’s orchestrated financial calamity.   A particularly sound play from a political perspective in the event that things don’t go as smoothly as planned.

One thing is certain at this point:  An intentionally orchestrated crash is the direct recommendation of the BIS, per it’s annual report.   That this action exists as a potential policy measure is now confirmed.

The remaining question is: Would the Federal Reserve pursue such a policy measure openly, or behind the same curtains from which most of their historic policies were enacted.

As we re-think Mrs. Yellen’s speech to the IMF, we are less certain that the Fed is as unwilling to intervene as Mrs Yellen would have us believe.   Bringing forward the next leg of the cycle, may well be on the Fed’s agenda.

2 thoughts on “Is The Fed Going To Attempt A Controlled Collapse?”