On opposite sides of the globe, pesticide regulators are refusing to release to the public the key industry studies on glyphosate that underpin regulatory authorizations and safety limits set for the herbicide. 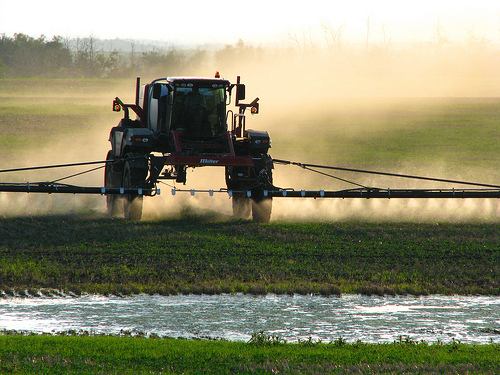 Earlier this year a group of Chinese food safety volunteers submitted a request to China’s Ministry of Agriculture to disclose the study that justified issuing the safety certificate for the import into China of Monsanto’s glyphosate-based herbicide Roundup. The Ministry replied that Roundup was registered in China in 1988 based on a toxicology test report issued by a testing company called Younger Laboratories in St Louis, Missouri. The test was an acute exposure toxicity test (such tests last a maximum of a few days), with Roundup being given to rats by mouth and applied to the skin of rabbits. It claimed to find no effect on the eyes or skin, and no allergy.

It is hard to credit that China would approve a herbicide as safe to use and consume as residues in food over the long term on the basis of toxicity tests lasting just a few days.

Meanwhile in Europe, Tony Tweedale, a Brussels-based advisor to NGOs on toxicity and risk assessment issues, asked the European Food Safety Authority (EFSA) to disclose the two key chronic toxicity studies on glyphosate that the German regulatory agencies relied upon to set the Acceptable Daily Intake (ADI) of the chemical. Germany is the “rapporteur” member state for glyphosate’s renewed market approval in Europe. Based on these studies, Germany had recommended revising the ADI upwards from 0.3 mg to 0.5 mg per kg of bodyweight per day.

This means regulators are allowing more exposure for you and me.

Presumably, these must be very reassuring studies, since they are claimed to show that glyphosate is safe in long-term exposures. Yet both the German government regulatory agencies (Germany is the “rapporteur” member state for glyphosate) and EFSA have refused Tweedale’s requests to release the studies, on the grounds that they are commercially confidential information.

However, a 2013 ruling at the European Court of Justice in Luxembourg could throw a spanner into the works of this cosy industry/regulator nexus. The case was brought by PAN Europe and Greenpeace Netherlands against the European Commission after it refused to disclose industry information on the exact composition of glyphosate, including impurities and additives. Referring to the Aarhus Convention on access to environmental information, the Court ruled that any document containing information about emissions to the environment must be released without any restriction.

Tweedale commented on the ruling: “Presumably it covers industry’s toxicity studies, with which chronic risk is always assessed. But neither Germany or EFSA (so far) will release these key studies in the case of glyphosate.”

Tweedale has appealed to EFSA to reverse its original decision, citing the European Court of Justice ruling, and awaits its response.

What are they hiding?

Such official stonewalling raises the question of what could be in these industry studies that that public is not allowed to see. It’s an obvious assumption that industry has plenty to hide, but maybe the regulators do, too.

In 2011 Earth Open Source published a report called “Roundup and birth defects: Is the public being kept in the dark?”

The report found that industry’s own studies conducted in the 1980s and 1990s showed that glyphosate causes birth defects in experimental animals. While the industry studies themselves are held by the German government and remain secret, the Earth Open Source authors examined Germany’s summary report on the studies, which is in the public domain. This report was submitted to the EU Commission and led to glyphosate’s European approval in 2002.

The Earth Open Source authors were surprised to find that the German regulator consistently dismissed evidence of birth defects using unscientific reasoning. For example, the German regulator introduced irrelevant “historical control data” to dilute out the malformations seen in exposed groups of animals, enabling a false conclusion of no effect from glyphosate exposure. It also creatively redefined a known skeletal malformation as “rather a developmental variation than a malformation” (page 15).

This appears to be a case of the German regulator minimizing harm made explicit even in industry’s own tests. If the German government or EFSA were to release the industry studies, independent academic scientists could reanalyze the data and form their own conclusions about the safety of glyphosate. Given the past failures of risk assessment, these could well be at odds with the conclusions of the German regulator, which form the basis of the current regulatory approval of glyphosate. In fact, not just the results, but also the details of the methodology of the industry tests should be made public, since data are only as strong as the methods used to derive them.

There is another reason why regulatory agencies may not want industry studies underlying risky product authorisations to be made public. That reason is identified by former US Environmental Protection Agency (EPA) staffer Evaggelos Vallianatos in his recent book, Poison Spring (Bloomsbury, 2014). Vallianatos quotes the EPA scientist Adrian Gross as saying that his colleagues long ago gave up actively reviewing industry studies in a way that would allow them to identify problems with the data or interpretation. “Instead,” Gross said, the EPA toxicologists “go straight to the company’s summary and lift it word for word and give it as their own evaluation of those studies.”

It would be interesting to see if the German agencies’ reassuring interpretation of the glyphosate toxicity data represents their own analysis, or is lifted straight from Monsanto’s own summaries. If the latter, then the pretense that any kind of regulatory oversight of glyphosate has occurred is illusory. What has gone on under the name of regulation would be revealed as nothing more than Monsanto announcing that its own products are safe.