And I can only repeat myself …

… because what could possibly go wrong?

“Welcome to the new normal capital structure, where everything is upside down and nothing makes sense.

Oh, and to all those pointing to the weekly increase in the H.8 statement and screaming “look at the recovery”, our apologies: you are, as usual, wrong.”

I hope you are prepared for what is coming.

It took the mainstream media a few months to catch up to the theme first revealed here that in addition to the fading QE (even if supplanted by NIRP in Europe and Turbo QE in Japan), one of the primary driving forces of the market’s outperformance in 2014 was a relentless buyback bid as corporations, lacking better uses for their cash, bought a record amount of their own shares in Q1 (and as will soon be proven) in Q2 attempting to increase the EPS by lowering the S.

It was only logical that it would take the MSM a while to follow up with the logical next connection: one which is so simple we described it back in 2012 when we showed “Where The Levered Corporate “Cash On The Sidelines” Is Truly Going” – namely, an unprecedented scramble to lever up and use the proceeds to buy back stocks, a decision which is great for existing shareholders and horrible for the economy (as it means much less spending on capital investment) for employees (as it means less cash available for wages and thus, for the all important wage inflation) and for the long-term viability of the buying back company (as it levers up the corporate balance sheet without a matching increase in revenues or cash flows, in fact, the opposite).

Which brings us to today, and specifically, an FT article titled “Bankers warn over rising US business lending” in which we read that “US lending to businesses is reaching record levels but banks are privately warning that the activity should not be seen as evidence of an economic recovery.”

And the stunner: “Much of the corporate lending is going to fund payouts to shareholders, finance acquisitions and fuel the domestic energy boom, bankers say, rather than to support companies’ organic growth.”

What the FT is referring to is not only the record net unsecured debt plaguing corporate balance sheets, because as both we and Deutsche Bank showed, net debt is at the highest level ever while corporate cash has never been lower… 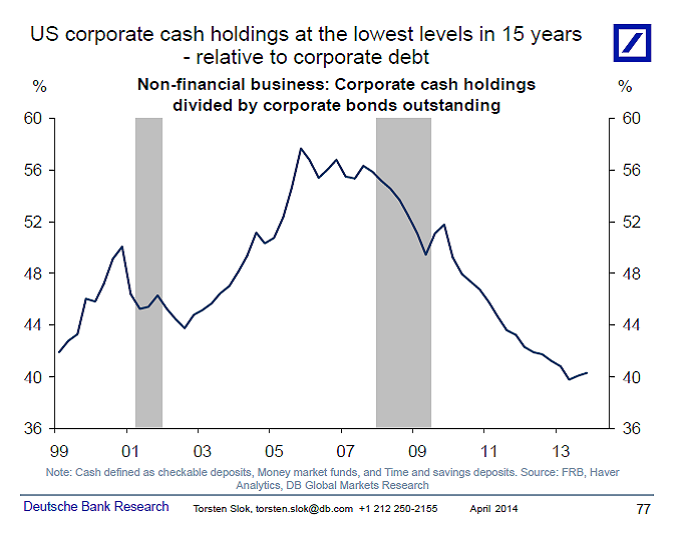 …but also the recent surge in bank loans and leases which finally, after years of virtually flatlining, have start increasing as shown in the chart below. 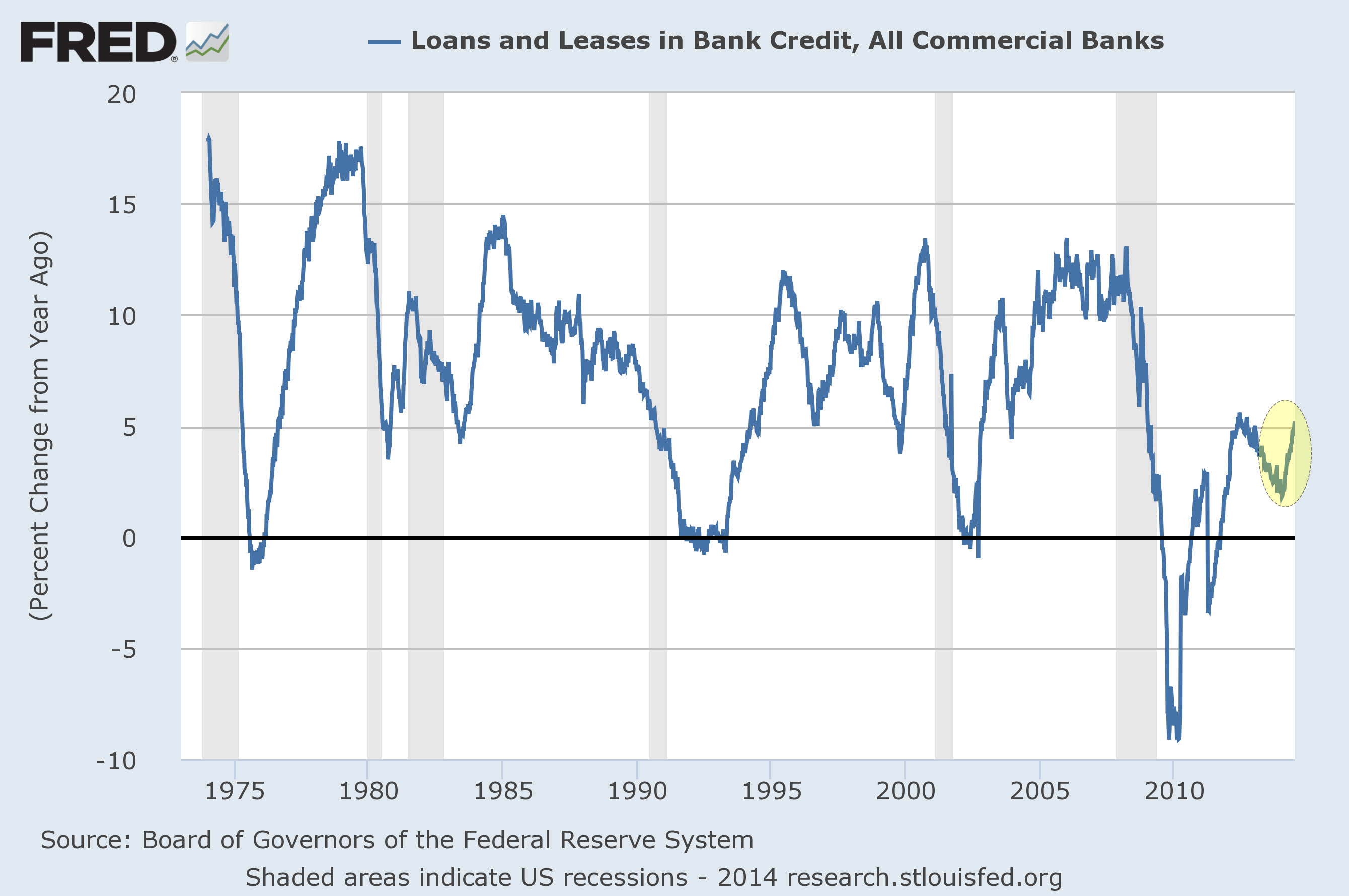 The highlighted increase in the Y/Y rate of issuance of loans and leases by US commercial banks is critical as it has been widely trumpeted as the main reason why the economy is once again starting to pick up, and for the first time since the launch of QE, there appears to be a substantial increase in demand for commercial and industrial loans by US corporations: easily the biggest missing link to confirm the so-called US “recovery.”

Well, not so fast. Because if what the FT says below is true, one can promptly scrap the entire premise that “loans are increasing therefore the economy is on the mend.” Here is what the FT had to say:

Total outstanding commercial and industrial (C & I) lending, which runs the gamut of loans to sectors from energy to healthcare and excludes consumer or real estate loans, rose to a record $1.7tn in May from a post-crisis trough of $1.2tn nearly four years ago, according to data from the Federal Reserve Bank of St Louis.

For the top 25 US commercial banks by assets, C & I lending grew by 10.5 per cent in the quarter to June 25 from the previous quarter, according to annualised weekly data from the Federal Reserve.

This type of lending is an important source of business for the largest US banks, representing about a fifth of all loans made by the likes of Bank of America, JPMorgan Chase and Wells Fargo, according to Citigroup research. While low interest rates have made business lending less lucrative, the relationships it forges open doors for the banks to sell other services such as treasury management, hedging and leasing.

A second corporate banking executive at a large regional lender said: “The larger part of the usage in the market right now are loan refinancings where companies are paying dividends back out.”

And the absolute shocker of a punchline:

He added: “They’re requesting increased loans or usage under a lien in order to pay a dividend or equity holders of a company. Traditionally banks have been very cautious of that.”

The soundbite conclusion from the FT is self-explanatory:

Charles Peabody, a bank analyst at Portales Partners in New York, has warned that while it is hard to extrapolate what is driving commercial and industrial lending, if it is to fund acquisitions or share buybacks it may not indicate a strengthening economy. “It is loan growth, just not sustainable,” he said.

Actually, it is far, far worse.

What the FT is effectively saying is that unlike before when companies would issue unsecured debt (i.e. General Unsecured Investment Grade bonds) which would be used to find buybacks and dividends – something which is perfectly in the company’s right to do as long as it has revealed the use of proceeds to yield chasing bond investors, what companies are doing now is taking on secured debt and using the proceeds to fund buyback their stock or fund dividends!

It is here that the hair of anyone who has ever underwritten any debt, secured or unsecured, should stand on end. Because this revelation shows that unlike the last bubble, when levered buybacks once again went through the roof, at least they were unsecured and the bank did not have a lien on any assets should the company ultimately file bankruptcy as a result of a debt issuance spree.

This time, however, in order for shareholders to cash out, existing bondholders will be primed by the bank when the rate cycle finally turns and all the companies that were scrambling to reward investors now and up going tits up. It also means that banks effectively become lienholders in companies without having any actual collateral backing their loans, because while tracking down the cash outflow to shareholders may be a fun way to spend a decade in court demanding a fraudulent conveyance case, it means virtually no recoveries when all is said and done.

In simple terms: instead of indicating a recovery, any recovery, the only thing the recent surge in loans and leases indicates is that companies are increasingly more desperate to cash out their shareholders, and are completely oblivious of what form of debt they use to fund such shareholders friendly activities as stock buybacks and dividends.  It certainly means that instead of using the liened cash to invest in growth, or even maintenance, CapEx, so critical for the non-recovering economy, the only thing that is happening is that banks are effectively funding corporate shareholders with secured debt, in the process collateral-stripping the intermediary companies which with every such incremental deal have less and less recourse to unencumbered assets.

Welcome to the new normal capital structure, where everything is upside down and nothing makes sense.

Oh, and to all those pointing to the weekly increase in the H.8 statement and screaming “look at the recovery”, our apologies: you are, as usual, wrong.