“You need to read to the last sentence to get what I have been saying for months. Less than half the world international transactions are now completed in US dollars……..” 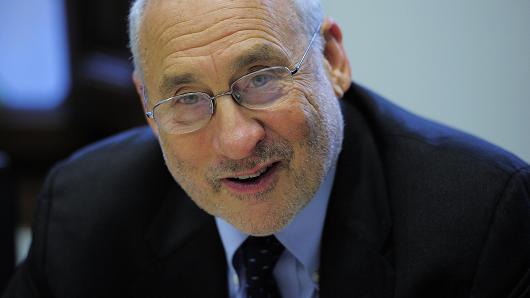 Nobel Prize-winning economist Joseph Stiglitz said on Monday he is “very uncomfortable” with current stock market levels, arguing they do not equal a strong economic recovery in the United States.

The Dow breached 17,000 points on Thursday before the U.S. markets closed for the long July Fourth weekend. The jump came after the U.S. government reported the economy created a better-than-expected 288,000 jobs in June and the unemployment rate fell to 6.1 percent.

“The reason the stock market is high, in part, is that interest rates are low, wages are low and the emerging markets are still growing much faster than the U.S. economy, let alone Europe,” Stiglitz said. He pointed to the fact that many U.S.-listed multinationals are increasingly getting a large chunk of their profits from emerging markets.

“These very strong stock market prices are in a sense a symptom of the weak economy, not a symptom that we are about to have a strong recovery to our real economy,” he said.

Stiglitz, a professor of economics at Columbia University, said the recent stock market gains are not a sign that we are witnessing a recovery. Instead, we would see the continuation of a “North Atlantic malaise,” he said.

“Remember, labor force participation is at very, very low levels, much lower than before the crisis. Real wage increases have been very weak, well below what they should be if we were having a robust recovery,” Stiglitz said. “There are lots if indicators that suggest this is a weak recovery.”

He also pointed to growing inequality as a reason for the weak recovery in the U.S.

“In the United States, from 2009 to 2012, 95 percent of the gains went to the upper 1 percent. Ordinary Americans are using up their savings.”

Anyone looking at the prospect of the United States having a consumption boom in the context of so much inequality should “think twice,” according to Stiglitz.

While the Federal Reserve is reducing the rate of its monthly bond-purchasing program, it continues to hold short-term interest rates near zero. Economists recently have been speculating that the Fed may raise rates sooner than current expectations of mid-2015.

Stiglitz believes the Federal Reserve is doing “exactly the right thing” by not raising rates immediately.

– SMOKING GUN FROM THE FEDERAL RESERVE MURDER OF THE MIDDLE CLASS

“It is, I believe, clearly premature to raise interest rates,” he said. “They’re going to wait and see exactly how this plays out. If it turns out that month after month we get 300,000 or so (new) jobs, then I think there will be evidence that there’s a real recovery.”

Turning to the hegemony of the U.S. dollar in international transactions, Stiglitz said he expected the currency’s role in trade to diminish over time.

“The role of the dollar in the global financial system more broadly is an anachronism in the 21st century,” he said.

Increasingly, China’s renminbi will be used, he said. In the same way sterling gave way to the dollar, the dollar’s role will diminish, according to the Nobel Prize-winning economist.

Michel Sapin, the French finance minister, called for a “rebalancing” of the currencies used for global payments, in an interview with the Financial Times over the weekend. The paper noted that more than half of cross-border loans and deposits are transacted in dollars.