“How they are white washing rate hikes”

“Suddenly, higher interest rates are a good thing. Rubbish about hiring, the way they twist the numbers is criminal………..
This is what I have been worried about, greedy bankers are going after the higher level of the remaining middle class. These are the folks sitting on multiple properties which they owe more on than they are currently worth……still waiting for that so-called recovery that just isn’t happening.
The FED is a privately held bank, and they serve the greedy, not the nation. They are now digging in their tentacles more deeply. The US has no control of the FED. The worst thing, as my friend who has infinite unknown has said again and again, is the creation of such a monster.“

“Continued labor market improvements alongside a pickup in second-half growth …”

And yes, you really can’t make this stuff up!

– RECOVERY: June Full-Time Jobs Plunge By Over Half A Million, Part-Time Jobs Surge By 800K, Most Since 1993

– RECOVERY: The Number Of Working Age Americans Without A Job Has Risen By 27 MILLION Since 2000

And as I’ve said before …

‘Recovery’ is the ‘Greatest Depression’

The U.S. will simply not be able to pay for higher interest rates on its debt (and the Fed will sooner or later go back into high gear quantitative easing mode).

Prepare for collapse … and chaos! 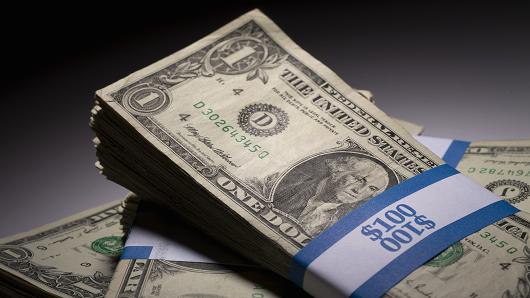 After a weekend of celebrating America’s birthday, traders could come back to the desks Monday and buy its currency, with the stage set for a U.S. dollar breakout in the second half of the year.

Strategists and traders have been predicting it for months: 2014 was supposed to be the year of the dollar, where the Federal Reserve’s tapering of quantitative easing and an improving economy would boost the greenback’s value against other currencies, where central banks are easing or dealing with economic or geopolitical challenges.

But they’ve been wrong.

The U.S. Dollar Index ended the first half of the year weaker, though less than half a percent. At the same time, currencies like Brazil’s real, New Zealand’s dollar, Australia’s dollar, the Japanese yen and the British pound strengthened 3 percent to 6 percent.

The reason for broad dollar weakness? Strategists point to lower yields on Treasurys, which tend to track the dollar, especially at the short end of the curve. Indeed, Treasurys rallied and the yield on the benchmark 10-year note tumbled half a percent.

Low rates typically correspond with weak currencies—think Bank of Japan’s QE bazooka and the nearly 18 percent drop in the Japanese yen in 2013.

The explanation for dollar weakness and persistently low yields is that the Fed, under Janet Yellen, is in no hurry to lift interest rates from rock-bottom levels, despite tapering monthly bond purchases. Also, the economy significantly underperformed in the first quarter, contracting 2.9 percent.

But everything changed with June’s blowout jobs numbers Thursday.

“The dollar has been suppressed by low Treasury yields in recent months, but with yields moving more intuitively with better data, the dollar rally has further to run,” wrote Bank of America Merrill Lynch strategists led by Priya Misra and Ian Gordon.

In other words, with a markedly better economy, yields should finally begin to rise and take the dollar with them.

The lowest unemployment rate in six years. The seventh-best, five-month rate of private sector job creation dating back to 2001. A revision to April’s data that made April the third-best month for private sector job creation of the entire recovery, and the strongest six-month pace of job growth since 2006. It’s fair to say that the job market is, for now, “en fuego.”

It was such a positive surprise that a growing chorus of Wall Street strategists are changing their forecasts for Fed policy, bringing forward bets of a Fed interest rate hike. That should change the direction of Treasurys and the dollar.

“It’s now time for some acknowledgements from the Fed, otherwise there is a risk of financial market volatility related to fears that the Fed is falling behind the curve,” strategists at Bank of Tokyo Mitsubishi said in a report. “We continue to expect a change in forward guidance, resulting in higher yields and a stronger dollar.”

“Yellen is not going to be able to wait until May 2015 to raise rates, and that is what the U.S. Treasury market is responding to,” said Peter Boockvar, chief market analyst at The Lindsey Group.

As the Fed may need to at least be considering higher rates, the other two most powerful central banks in the world, the European Central Bank and the Bank of Japan, are moving in the opposite direction. For currency traders, that signals a clear interest rate differential, which should drive money into the dollar and out of other currencies with easier central bank policies.

“Continued labor market improvements alongside a pickup in second-half growth will lead to increased inflation and policy divergence in the G-10 space, a dollar-positive scenario,” the strategists at Bank of America Merrill Lynch said. “We recommend long (U.S. dollar) positions against (the Japanese yen) and (Canadian dollar) where interest rate differentials play an important role, and against (the Australian dollar) where a tighter Fed policy stance will impact carry,” they write.

That’s why the dollar jumped the most in a month after the jobs report was released Thursday before the Fourth of July, on the back of a jump in two-year yields, the most since September, and the 10-year yield reached the highest level since May 2. The dollar index notched its biggest weekly gain in six weeks, though it was flat in early Monday trading.

It could be just the beginning.

“The Dollar Index held important technical support near 79.70 early in the week,” Brown Brothers Harriman strategists led by Marc Chandler said in a note. “By the end of the week, it was approaching the lower end of a band of resistance that extends from 80.30-80.45. A move above there would signal scope toward 81.00.”

So what does a stronger dollar and higher yields mean for the sustainability of the persistent stock market rally?

Some fear higher rates could put a stop to the record run.

But so far, there’s no sign of that, as long as economic and earnings reports continue to paint a growth picture.

“Of late equities seem to be hanging in, taking good data as good for profits as an offset to the higher rate expectations and the S&P still seems to be treating 2000 as a target that will be tested in the summer,” wrote Alan Ruskin of Deutsche Bank.

Michael Purves, chief global strategist of Weeden & Co., noted that in Friday’s equity rally in reaction to a better jobs report, rates didn’t jump dramatically. In other words, interest rate volatility, or lack thereof, could be the key to whether the equity rally can continue simultaneously with rates rising.

“We are not seeing enough rate volatility to knock the markets down,” Purves wrote.

Add it all up and the moment strategists have been waiting for should be here: a stronger U.S. dollar.