“Like I said…all banksters are in it together to look after each other.

The crunch is imminent, no doubt.”

– Germany Gives Up On Trying To Repatriate Its Gold, Will Leave It In The Fed’s ‘Safe Hands’ 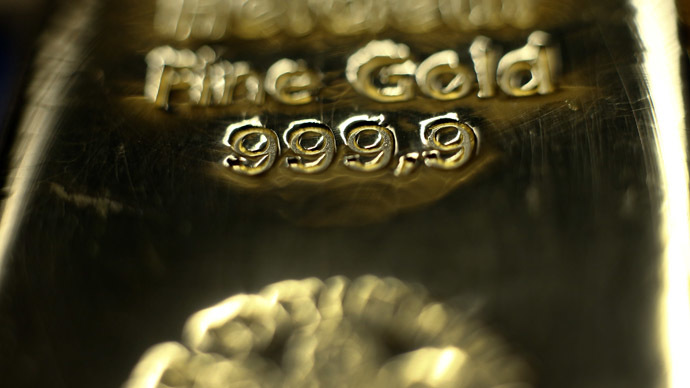 – Germany’s failed attempts to get its gold back from the US ‘opens question of its sovereignty’ (RT, July 7, 2014):

There is neither real criticism from German politicians, nor any visible efforts to return German gold held in the US, so it seems that US controls Germany, economic analyst Michael Mross told RT.

In one of its recent reports Bloomberg claimed that Germany decided not to repatriate its gold reserves from the US, instead the Bundesbank issued an official statement that underscores it’s “trust” in its American partners. According to Bloomberg, Germany gave up after repatriating just 5 tons of gold, though earlier it was told that it would get all the German gold back by 2020.

RT: What’s really behind Germany’s efforts to get its gold reserves back?

Michael Mross: These German efforts to get back gold reserves are not really there. They are talking about it but it is only a simple and ridiculous theatre in my opinion. I cannot see any effort to do it. What we have is lack to re-transport or take back, 300 tons before 2020, but also this is ridiculous – last year they took back only 37 tons. At the end of the day, it is to make the public calm, but it is not really an effort to take back the gold.

RT: Shifting so much gold in the time-frame they’ve given themselves sounds like a logistical nightmare. How are they going to manage it?

MM: 300 tons by 2020 is really nothing, and as a matter of fact only 37 tons have been transported so far back from the US. In my opinion, the gold will stay there as propaganda like actions are underway to tell the German public that the German gold in New York is safe. But of course the contrary is true.

RT: Do you buy any of the conspiracy theories that the gold is missing?

MM: This is not a conspiracy theory. If it is there you can take it back. Why don’t they give it back to us? In my opinion, it seems that they like to control us, even blackmail us. If you have gold, you tell me what to do. It opens many questions when it comes to the real sovereignty of Germany. Also it comes to all the scandals which we had, for example, these NSA surveillance things in Germany. We do not hear real actual critique from German politicians, and also when it comes to the German gold at the moment everything is calm and everything will stay where it is. But I have a solution. They can keep it, they can keep our gold. It’s worth about 100 billion dollars at the moment or even euro, and so they can send us the money, then we can buy back the gold on the market during 1-2 years. But even this does not happen. In my opinion they keep the gold because we are condemned to be calm and must not have any questions and any demands in order to take it back.

RT: Here’s a recent quote from Merkel’s party’s spokesperson: “The Americans are taking good care of our gold. Objectively, there’s absolutely no reason for mistrust.” This has led some to speculate that Germany’s had a change of heart and wants its gold to stay put. What do you make of that?

MM: This was a report from Bloomberg and it was a wrong report. It did not reflect the truth. It is very interesting that Bloomberg is publishing such a thing. Bloomberg got this thing deliberately wrong to con the German public. There are many quotations of people, for example, we have here in Germany the action [initiative] “Take our gold back home”, and at Bloomberg he was quoted as “Ok, we are calm, we don’t want it back”. This was absolutely not true. And these politicians which were quoted in this report, they have absolutely no competence about our gold. When it comes to German gold only the Bundesbank has something to say, but they were not mentioned in this article.