How in the world does the government expect us to trust the economic numbers that they give us anymore?  For a long time, many have suspected that they were being manipulated, and as you will see below we now have stone cold proof that this is indeed the case.  But first, let’s talk about the revised GDP number for the first quarter of 2014 that was just released.  Initially, they told us that the U.S. economy only shrank by 0.1 percent in Q1.  Then that was revised down to a 1.0 percent contraction, and now we are being informed that the economy actually contracted by a whopping 2.9 percent during the first quarter.  So what are we actually supposed to believe?  Sometimes I almost get the feeling that government bureaucrats are just throwing darts at a dartboard in order to get these numbers.  Of course that is not actually true, but how do we know that we can actually trust the numbers that they give to us?

Over at shadowstats.com, John Williams publishes alternative economic statistics that he believes are much more realistic than the government numbers.  According to his figures, the U.S. economy has actually been continually contracting since 2005.  That would mean that we have been in a recession for the last nine years.

Could it be possible that he is right and the bureaucrats in Washington D.C. are wrong?

Before you answer that question, read the rest of this article.

Another number that many have accused of being highly manipulated is the inflation rate.

As Robert Wenzel recently pointed out, Mike Bryan, a vice president and senior economist in the Atlanta Fed’s research department, has been very open about the fact that the way inflation is calculated has been changed almost every month at times…

The Economistretells a conversation with Stephen Roach, who in the 1970s worked for the Federal Reserve under Chairman Arthur Burns. Roach remembers that when oil prices surged around 1973, Burns asked Federal Reserve Board economists to strip those prices out of the CPI “to get a less distorted measure. When food prices then rose sharply, they stripped those out too—followed by used cars, children’s toys, jewellery, housing and so on, until around half of the CPI basket was excluded because it was supposedly ‘distorted'” by forces outside the control of the central bank. The story goes on to say that, at least in part because of these actions, the Fed failed to spot the breadth of the inflationary threat of the 1970s.

I have a similar story. I remember a morning in 1991 at a meeting of the Federal Reserve Bank of Cleveland’s board of directors. I was welcomed to the lectern with, “Now it’s time to see what Mike is going to throw out of the CPI this month.” It was an uncomfortable moment for me that had a lasting influence. It was my motivation for constructing the Cleveland Fed’s median CPI.

I am a reasonably skilled reader of a monthly CPI release. And since I approached each monthly report with a pretty clear idea of what the actual rate of inflation was, it was always pretty easy for me to look across the items in the CPI market basket and identify any offending—or “distorted”—price change. Stripping these items from the price statistic revealed the truth—and confirmed that I was right all along about the actual rate of inflation.

Right now, the Federal Reserve tells us that the inflation rate is sitting at about 2 percent.

But according to John Williams, if the inflation rate was calculated the same way that it was in 1990 it would be nearly 6 percent.

And if the inflation rate was calculated the same way that it was in 1980 it would be nearly 10 percent.

So which number are we supposed to believe?

The one that makes us feel the best?

But anyone that does any grocery shopping knows that we are definitely not in a low inflation environment.  For much more on this, please see my previous article entitled “Inflation? Only If You Look At Food, Water, Gas, Electricity And Everything Else“.

Of course the unemployment rate is being manipulated as well.  Just consider the following excerpt from a recent New York Post article…

In case you are just joining this ongoing drama, the Labor Department pays Census to conduct the monthly Household Survey that produces the national unemployment rate, which despite numerous failings is — inexplicably — still very important to the Federal Reserve and others.

One of the problems with the report is that Census field representatives — the folks who knock on doors to conduct the surveys — and their supervisors have, according to my sources, been shortcutting the interview process.

Rather than collect fresh data each month as they are supposed to do, Census workers have been filling in the blanks with past months’ data. This helps them meet the strict quota of successful interviews set by Labor.

That’s just one of the ways the surveys are falsified.

The Federal Reserve would have us believe that the unemployment rate in the U.S. has fallen from a peak of 10.0 percent during the recession all the way down to 6.3 percent now.

But according to shadowstats.com, the broadest measure of unemployment is well over 20 percent and has kept rising since the end of the last recession.

And according to the Federal Reserve’s own numbers, the percentage of working age Americans with a job has barely increased over the past four years… 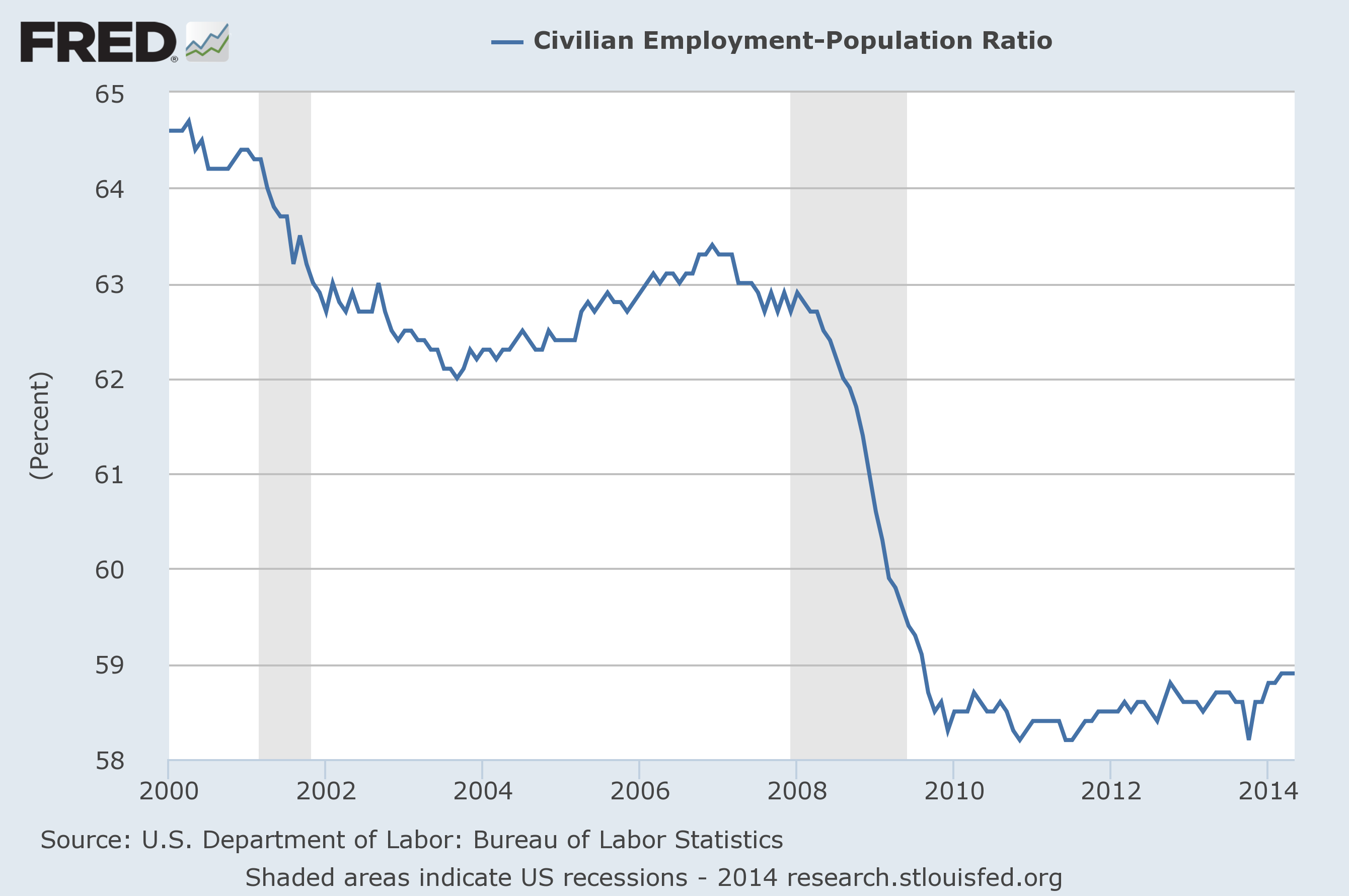 The chart above looks like a long-term employment decline to me.

But that is not the story that the government bureaucrats are selling to us.

So where does the truth lie?

What numbers are we actually supposed to believe?