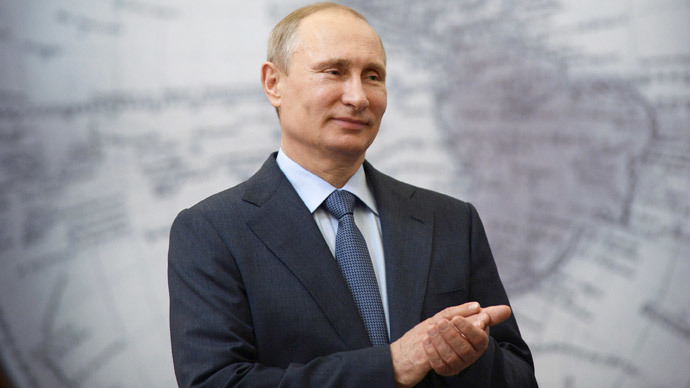 Sixty-six percent of Russian citizens want Vladimir Putin to continue at his presidential post for the next term, the latest opinion poll shows. The respondents especially praised his efforts in foreign policy and in strengthening Russian military.

According to the Public Opinion foundation, two thirds of Russians also claimed that Putin’s policies were fully in line with their own interests. The number rose from 36 percent in September 2012 to 66 percent in June this year.

Even more Russians agreed that Putin’s work as a president matched the expectations they experienced during the elections two years ago. In addition, 55 percent of those polled hold that during the current term Putin was fulfilling his duties better than during his first and second terms in office.

When asked which of Putin’s steps they approved of most, 29 percent of Russian public nominated the accession of Crimea and Sevastopol into the Russian Federation, 7 percent mentioned the efforts for political settlement of the Ukrainian crisis, 5 percent said it was the successful hosting of the 2014 Winter Olympics in Sochi and four percent answered that it was Russian foreign policy in general.

Most respondents also pointed out the President’s successes in strengthening the country’s military potential and in defending Russia’s positions in the international politics.

In mid-March this year another influential polling agency – the All-Russian Public Opinion Research Center, VCIOM, released a report claiming that Vladimir Putin’s rating has risen 15 percent since the beginning of 2014 and stands at 75.7 percent – the highest in the last five years.

According to VCIOM, most people connected their approval of the president with his good handling of the Ukrainian political crisis and the help extended to the people of Crimea.