It has been a while since Obama and Putin held one of their signature phone conversations purely for public theater and photo-op purposes. Moments ago, we learned that following weeks of silence, the world leaders had spoken earlier today, when first the Kremlin, the the White House, released details of the just conducted phone conversation. 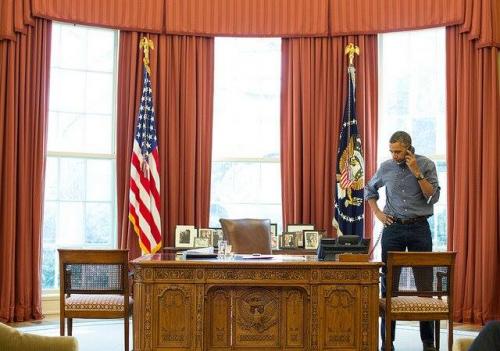 In accordance with a previous arrangement, a telephone conversation took place between Vladimir Putin and U.S. President Barack Obama.

Discussed were various aspects of the acute internal crisis in Ukraine, the prospects of resolving the situation, including implementation of the peace plan put forward by the President Petro Poroshenko. Vladimir Putin stressed that for the normalization of the situation in the south-eastern regions, a key priority is the effective cessation of hostilities and the start of direct negotiations of the opposing sides. Also noted was the importance of urgent humanitarian issues including emergency assistance to the affected population.

During the exchange of views on other topical issues of the international agenda, Vladimir Putin and Barack Obama expressed serious concern regarding the militant activity in Iraq of the terrorist group “Islamic State of Iraq and the Levant.” The Russian leader expressed support for efforts to combat Baghdad Islamists and to establish peace and security in the country.

Also noted was the situation in Syria in view of the completion of the removal of this country’s chemical weapons, as well as developments in the Iranian nuclear program.

The US takes was slightly different, and according to the new White House spokesman, Obama once again reverted to his favorite topic: costs. From Bloomberg

President Obama spoke with Russian President Putin this morning to urge him to use influence to promote peace and stability in Ukraine, White House spokesman Josh Earnest tells reporters.

One wonders if the latest disastrous intervention by John Kerry was also discussed, or if that was more of a unilateral “laughter” type comment by the Russian president.

Considering this is the nth+1 conversation between the two presidents which have so far achieved precisely nothing when it comes to joint efforts, one can be sure that this latest phone call will only “result” in a several thousand dollar phone bill on Obama’s hotline phone, invoiced promptly to the US taxpayers.