Back in 2006, after the second US invasion of Iraq culminated if not with the discovery of the WMDs (which were the pretext for the invasion in the first place), but the unearthing (literally) and kangaroo court trial of Saddam Hussein, the US was quick to announce “mission accomplished.” Recent events have made a mockery of that claim, however what is truly the straw that broke the back of poetic justice, to mix metaphors, are reports from local media that as part of its blitz-campaign to take over northern Iraq, ISIS found and the promptly executed Rauf Rashid Abd al-Rahman, the judge who sentenced Saddam to death: a death which to many was the crowning moment of the second US invasion of Iraq, and the confirmation of successful US foreign policy.

It goes without saying that if true, the murder of the man who indirectly did the US bidding in slamming the book shut on the Saddam regime (and with it US claims of Iraqi “liberation”) and was responsible for Saddam’s death, means the last “Mission Accomplished” posted can now be safely taken down. 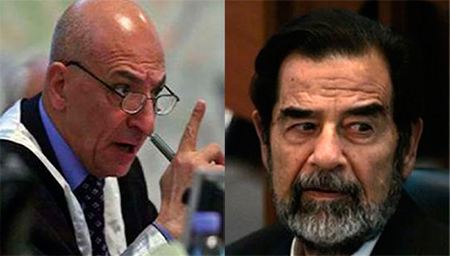 As LiveLeak first reported, Rauf Rashid Abd al-Rahman was the replacement chief judge of the Supreme Iraqi Criminal Tribunal’s Al-Dujail trial of Saddam Hussein in 2006. His background, from Wikipedia:

Abd al-Rahman was an ethnic Kurd from Halabja, the site of the 1988 Halabja poison gas attack. He replaced Rizgar Mohammed Amin as chief judge on 23 January 2006. Amin had resigned after being criticised in the Iraqi media for appearing “too soft” on the defendants by allowing them to speak aloud in court without being recognized.

After Amin’s resignation, Abd al-Rahman headed the Supreme Iraqi Criminal Tribunal during the rest of the trial of Saddam Hussein for genocide, and when it sentenced him to death. He also sentenced to death some of his top aides.

In December 2006, Abd al-Rahman took his family to Britain on a travel visa, and three months later applied for asylum. He later cancelled his application.

In 16 June 2014, Abd al-Rahman was arrested by ISIS rebels during 2014 Northern Iraq offensive. Two days later, it was reported that ISIS captured and executed him.

There were reports the execution of Iraqi judge, Raouf Abdel-Rahman, who spent the same judgment on Iraqi President Saddam Hussein, according to confirmed the pages on the social networking site, without official confirmation from the Iraqi government.

The pages on social networking sites, including Page MP Jordanian Khalil Attieh on the site “Facebook” to “revolutionaries Iraqis arrested him and sentenced him to death in retaliation for the death of the martyr Saddam Hussein,” he said, adding that Rauf tried to escape from Baghdad after wearing uniforms dancers.

She page Izzat al-Douri, vice-president Saddam Hussein, the “Facebook” to the rebels Iraqis were able to arrest the Kurdish judge Rauf Rashid, who issued a death sentence against the former Iraqi leader, which is currently in the “grip of the soldiers of the Islamic State and the men of the Baath Party.”

She page address, Iraqi Prime Minister Nuri al-Maliki, “Judge Rauf Rashid in the grip of Mujahideen equipped Aahalki neck”, in reference to al-Maliki, also falling in the hands of insurgents.

Judge Raouf Abdel Rahman presided over the trial of former Iraqi President Saddam Hussein, the successor to the judge Rizgar Amin, following the latter’s resignation in protest against foreign interference in the work of the court. Following the verdict on Saddam hanging out in the October 5, 2006, and was appointed justice minister in the Kurdistan Regional Government.

Although he was seen as an advocate of human rights, but he faced charges because of the way his administration for sessions trial of Saddam and the symbols of his regime, because Thamlh defendants, for being a city of Halabja, which came to the bombing of a chemical at the end of the eighties.

Over the past week, fell several cities in northern Iraq, in the forefront of Mosul, and Tikrit, Salahuddin province, in the hands of groups of armed Sunni, led by the organization “Daash”, after the withdrawal of army troops, in moves considered leaders tribal Sunni “popular revolution Sunni against injustice and sectarian government (Prime Minister outgoing Nuri) al-Maliki, the Shiite, “while the frequency of the authorities as” attacks from terrorist groups.”

1 thought on “Judge Who Sentenced Saddam Hussein To Death Has Been Executed By ISIS, Local Media Reports”