Back in 2011 Goldman, when the FDIC-insured bank holding company with no deposits, was slapped with the biggest at the time SEC penalty for shorting CDOs it had sold to clients, it started a trend of scapegoating all its evils on a lone, then 20-something individual, Fabrice Tourre, who seemingly had “worked alone” and whose actions were not supervised by anyone: the chain of responsibility started and ended with him. Naturally, nobody went to jail. A few years later, stuck in the biggest scandal of its post-bankruppcy existence involving over 20 million recalls in just the first 6 months of 2014 alone, GM has decided that what worked for Goldman should work for it too, and as the WSJ reports, is “pinning of a decadelong failure to recall defective cars on a lone engineer.”

Unfortunately for GM, an organization that is far more politically charged than Goldman, it is “running into skepticism from lawmakers who say GM documents show dozens of people were alerted to ignition-switch defects during the past decade.”

But before we get into the details of what is set to be even more political theater, just who is this lone engineer? 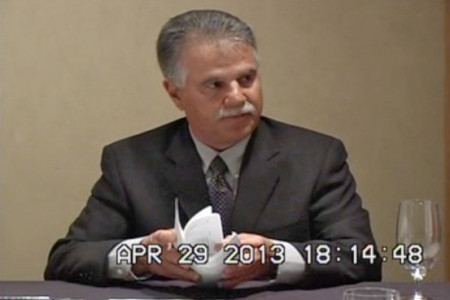 Mr. DeGiorgio joined GM in June 1991 and worked on a variety of different switches before being assigned to handle the 2003 Saturn Ion and 2005 Chevrolet Cobalt switches, according to his deposition in a lawsuit involving a Georgia woman who died in a Cobalt crash. At the time, GM had just brought switch design back in-house from suppliers to combat warranty issues and improve quality control.

The Valukas report portrays Mr. DeGiorgio as struggling to fix problems with his design, and at one point describing it as “the switch from hell.”

In November 2004, Mr. DeGiorgio received an email from an engineer in a GM team that works on high-performance versions of its cars, who said the group had noticed stalls on a test track when a driver’s knee “slightly” grazed the key fob. Despite being informed of the problem again, Mr. DeGiorgio made no changes to the ignition switch.

A separate warning about problems with ignition switches came from Laura J. Andres, a GM employee, who told 10 GM engineers including Mr. DeGiorgio of her experience with a Chevrolet Impala that stalled after she went over a bump in the road in August 2005.

We will have more to say about Ms. Andres shortly, who is now being presented as an early whistleblower in the GM scandal. For now, however, the attention appears to be on DeGiorgio who appears to be the fall guy designated by everyone to be thrown under the proverbial GM truck.

Mr. Valukas’s probe concluded Raymond DeGiorgio in April 2006 decided to institute a design change of an ignition switch that was causing cars to stall, and approved no change to the part identification number. That made the change difficult to track, and delayed efforts to understand why air bags in some of the vehicles weren’t deploying in crashes, the report found.

The engineer was one of 15 employees dismissed from the company earlier this month.

Yet lawmakers appear skeptical that unlike in the case of Goldman, where one person effectively took all the blame, that the same is applicable with GM. Among those who expressed incredulity with the official version were both republican and democrat representatives.

The internal probe portrays a relatively low-ranking engineer as responsible for approving a switch design that didn’t meet GM specifications and for concealing vital information that could have led the company to recall defective vehicles sooner.

“GM is trying to [argue] ‘he made this mistake alone,’ ” said Rep. Tim Murphy (R., Pa.), chairman of the House panel probing the recall. “Several mistakes were made along the way. Of 210,000 people, why didn’t anyone catch it?”

Lawmakers say unreleased testimony from Mr. DeGiorgio and an email released on Wednesday by Fred Upton (R., Mich.) show that ignition switch problems had been flagged as a safety issue within GM in 2005. Mr. Blumenthal said he has talked with former GM employees who are highly skeptical that a person at Mr. DeGiorgio’s level could have pulled off such a change.

Mr. DeGiorgio told congressional investigators he thought that another engineer would have had to sign off on the parts change, a House aide said on Thursday. That appears to fit with documentation the committee has received showing another engineer had signed off on a design change requested by Mr. DeGiorgio.

Rep. Jan Schakowsky, (D, Ill.) told Ms. Barra on Wednesday that Mr. DeGiorgio had told the committee’s staff that he met with his superiors in February 2002 and told them the ignition switch would be delayed.

“So, Ms. Barra, is it your belief that one engineer, Mr. DeGiorgio, unilaterally approved a part that had been plagued by problems from the start?” Ms. Schakowsky asked.

And what has Ms. Barra’s “responsibility” at the time, or now for that matter: would it be to justify the highest shareholder returns no matter the cost, even if the cost include an unknown number of lives lost in order to cut production costs, all the while ignoring quality controls and certainly internal whistleblowers? That question remains to be answered.

Perhaps hurting Barra’s attempts to bury the matter while blaming it all on a single scapegoat is that, unlike Goldman, some members of Congress actually understand the GM internal dealings, having worked there previously:

Rep. Bill Johnson (R., Ohio), who worked for an auto-parts supplier before joining the House, also challenged the assertion that Mr. DeGiorgio could have acted alone. “Would it be reasonable that the chief—the vehicle chief engineer—would have known about this situation?” Mr. Johnson asked Ms. Barra. Mr. Johnson also alluded on Wednesday to a May 2005 email that outlined a “customer concern” about the ignition switch sent to vehicle chief engineer Doug Parks, among others. That email hasn’t been released to the public.

Ms. Barra said the chief engineer “has to count on people doing their job” because “there are 30,000 parts on a car.”

Based on that statement she certainly appears qualified to run the bailed out car maker. However, what casts doubts on her defense of management’s handling of the situation is that it was nearly a decade ago when whistleblowers warning of ignitioning issues first appeared. Whistleblowers like Laura Andres whose concerns were, obviously, ignored.

Ms. Andres subsequently warned that the problem appeared to be with the design of the Impala’s ignition switch, and noted that a GM technician had told her other employees had complained about a similar problem with the Pontiac Solstice. The Solstice shared components with the 2005 Chevrolet Cobalt and other compact vehicles among 2.6 million recalled earlier this year to fix defective ignition switches. “I think this is a serious safety problem, especially if this switch is on multiple programs,” Ms. Andres wrote in one of a chain of emails released by the House panel…. Mr. DeGiorgio replied to Ms. Andres in an Aug. 31, 2005 email that the switch in her Impala is “completely different” than the one used on the Solstice. He says he has monitored reports and hadn’t found any similar issues as she described

A prior WSJ article has further details on Andres’ warnings as early as 2005:

Laura J. Andres, told GM engineers in 2005 that the Chevrolet Impala she was driving shut off after she went over a bump in the road. In a subsequent August 2005 email she warned that the problem appeared to be the design of the Impala’s ignition switch, and noted a GM technician who looked at her car said other employees had complained about a similar problem with the Pontiac Solstice—a small car that shared components with the 2005 Chevrolet Cobalt and other compact vehicles now known to possess a deadly defect.

Ms. Andres urged that engineers consider changing the part. “I’m thinking big recall. I was driving 45 mph when I hit the pothole and the car shut off, and I had a car driving behind me that swerved around me. I don’t like to imagine a customer driving their kids in the back seat, on I-75, and hitting a pothole, in rush hour traffic.“

By now it is fully clear that while it has been caught red-handed, and the resulting surge in recalls is merely an attempt to finally do the right thing even if it truly exposes the corrupt culture at the politically-charged carmaker not to mention its approach to creating a quality product – one of the main reasons it had to file Chapter 11 in the first place – the only thing GM cared about is generating a shareholder return (especially when faced with numerous activist hedge funds: recall that GM is in the top 5 most widely held stocks by hedge funds).

Politicians don’t know the answer either:

“I remain unconvinced there wasn’t an effort to ‘cover up’ bad decisions to avoid liability,” said Rep. Tim Murphy (R., Pa.), the panel’s chairman. It is probing why GM waited a decade to recall cars with a deadly safety defect involving Chevrolet Cobalts, Saturn Ions and other compact cars. Other lawmakers cited parts of an internal report that suggested GM managers had feared they could lose their jobs by raising safety concerns.

The internal report quotes GM quality manager Steven Oakley as saying that he was “reluctant to push hard on safety issues because of his perception that his predecessor had been pushed out of his job for doing just that.”

Ms. Barra said Mr. Oakley is still employed by GM, and is raising new safety concerns. “We are taking it very seriously,” she said. Ms. Barra launched a “Speak Up for Safety Program” and plans to reward employees for raising concerns about vehicle safety. “I am personally getting information from employees,” she said.

GM has “quality engineers”? How quaint.

In conclusion, it goes without saying that the only real question on the table, when the public tires of this latest congressional song and dance, is whether GM’s legacy approach of burying defects under the rug will finally be fixed even if it means major net income losses on a recurring basis (as opposed to the current allegedly “non-recurring” recall charges), or once the current crisis blows over GM will resort to its old standby of not recalling any potentially deadly vehicles as it means even more lost sales and further credibility hits.

In a world in which failure is rewarded with bailouts and where risk in general has been wiped out from the economic calculus thanks to the Fed, we already know the answer.