Argentina’s attempt to work around SCOTUS decision in favor of the ‘holdouts’ was rejected (under anti-evasion orders) last night leaving Argentina no alternative but to threaten to default on its debt. The government called it “impossible” to pay bond service due on June 30, because payment to holders of restructured bonds could not be made unless the ‘holdouts’ were paid $1.33 billion at the same time (and Argentina’s economy minister argues could be up to $15 bn) which the distressed country clearly does not have. For the first time in 12 years, Argentina has agreed to negotiate with the ‘holdouts’ (has renegged on that negotiation) who refused to participate in two restructurings that followed Argentina’s 2002 default but it seems increasingly likely that an even of default looms for Argentina.

Buenos Aires is locked in a 12-year legal fight with creditors who refused to participate in two restructurings that followed Argentina’s 2002 default on $100 billion in bonds.

In a televised address to the nation on Tuesday President Cristina Fernandez said Argentina was the victim of “extortion” by the holdouts, but that she was still open to negotiations and insisted she would continue to pay the more than 90 percent of creditors who accepted the restructuring terms.

“The lifting of the stay by the Second Circuit makes it impossible to make the next payment on restructured debt in New York, and shows a complete lack of willingness to negotiate under conditions different from those dictated by Judge Griesa,” a statement from the Argentine economy ministry said late on Wednesday.

Talks are nevertheless expected between the two sides in New York next week.

The holdout creditors are led by NML Capital Ltd., a division of billionaire Paul Singer’s Elliott Management Corp., and Aurelius Capital Management, chaired by Mark Brodsky, who warned that next week’s negotiations could prove to be a “charade”.

“Pari Passu (equal treatment) requirements impede Argentina from making the June 30 coupon payment to the holders of restructured bonds unless, at the same time, it pays all that is being demanded by the vulture funds, which could be up to $15 billion in total,” the economy ministry said.

So Argentina is willing to negotiate, but no one is buying it…

“Argentina’s lawyer has informed the court that unidentified government officials will come to New York on an unidentified day next week to discuss settlement after years of rebuffing settlement overtures,” said Aurelius’ Chairman Mark Brodsky.

“I have learned not to rely on any assurance Argentina’s counsel provide to our courts. I expect a charade, but I hope to be proven wrong,” he added.

And just minutes after we posted this… Argentina rebuffs… 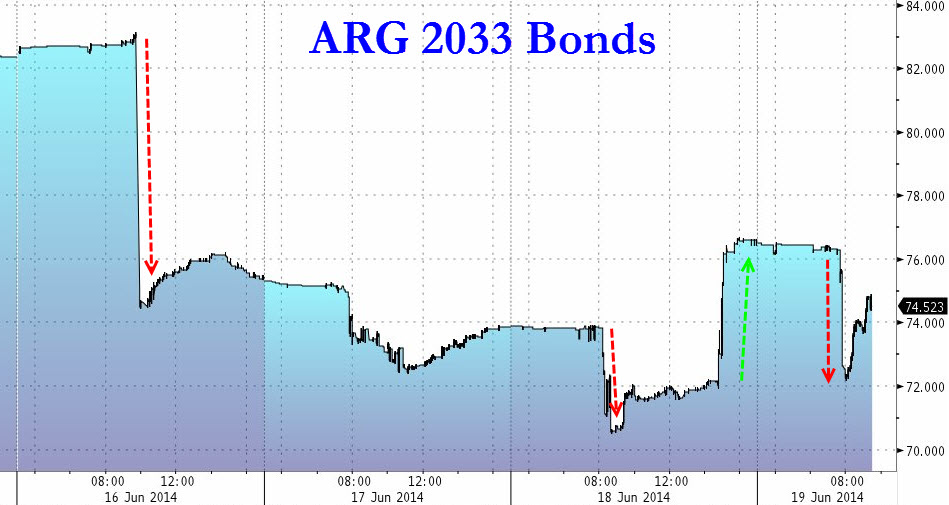 One good thing may come from the victory of the ‘hold-outs’: the government will find it difficult to rack up more debt. Some people quoted by Reuters bemoan that the situation will delay Argentina’s return to international capital markets, but Argentina’s citizens should probably be relieved to hear it. On the other hand, it may well mean that even more money printing is in store, so we cannot be entirely certain whether the news is actually good or bad in that sense.

One thing is certain though: the economic policies pursued in the country over the past century have consistently failed. No end to this failure is in sight as of yet. The country doesn’t need people specializing in Keynes and Marx, it needs a dose of Mises and Hayek.