A month ago, using the latest UK housing data from Rightmove, we asked a simple question: whose housing bubble is bigger: China’s, or the place where increasingly more of China’s $25 trillion in bank assets are being parked: the UK (specifically London). Using then available data, the answer was still a toss-up, even if the divergence in directions was quite clear.

Earlier today, we finally got the official data from the UK’s Office for National Statistics, and we politely retract our question, as rhetorical as it may have been. The reason: there is no contest – the UK’s housing bubble has officially slammed China’s, and the result is nothing short of a knock out.

The Office for National Statistics said on Tuesday that the cost of purchasing a home rose 9.9 per cent in the year to April across the UK, with a double-digit growth rate of 10.4 per cent in England.

The rise, including a 2 per cent gain in April alone, comes as the BoE’s Financial Policy Committee meets on Tuesday to consider imposing restrictions on risky mortgage lending in an attempt to cool the market. The FPC will, however, only announce any decisions it takes on June 26.

Representatives of mortgage lenders urged the FPC not to take draconian action even though house prices were growing at a pace. Peter Williams, executive director of the Intermediary Mortgage Lenders Association, said: “With house prices continuing to climb we are staring at a glaring mismatch between a rampant housing market and subdued mortgage activity that needs handling with care.”

The ONS measure of house prices is based on mortgage approvals of all the leading lenders and shows house prices at a new record level, now 6.5 per cent higher than the previous peak in January 2008.

The 2 per cent monthly change was the fastest pace of house price gain recorded on this index since the housing market recovery started to gather momentum last year.

And focusing on the only place that really matters:

Rapid price rises are still concentrated in London and southeast England, where prices rose 18.7 per cent and 8.9 per cent respectively. Outside London and the southeast, the annual rate of house price inflation was 6.3 per cent, although this figure had risen from 1.4 per cent a year earlier.

It may no contest, but for those who cares, here are the two housing bubbles in context: 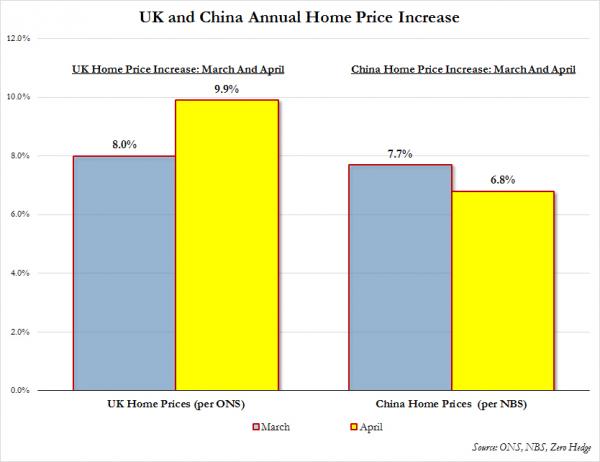 Even more disturbing: a chart showing the value of all UK dwellings from 2004 to April 2014. 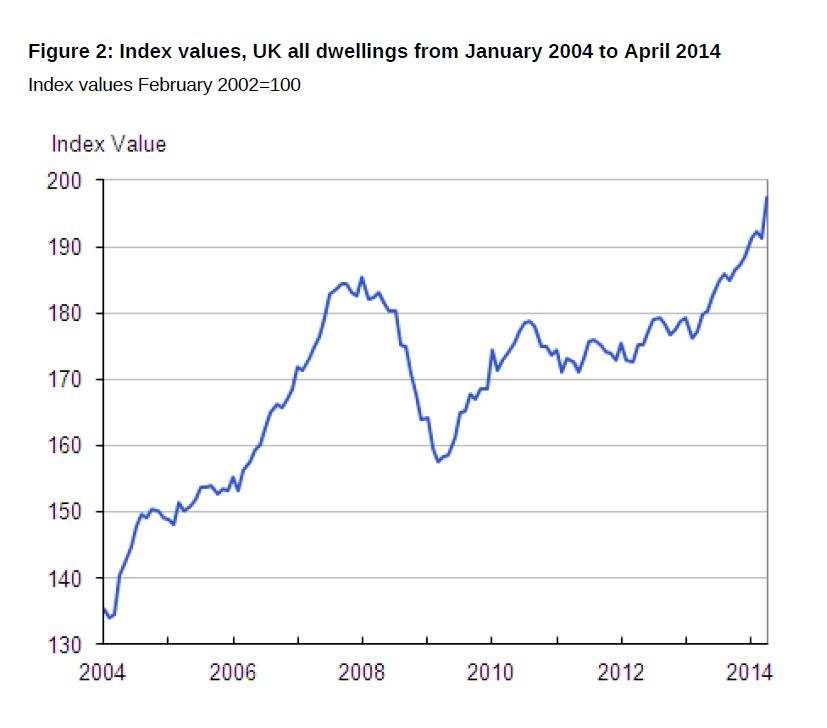