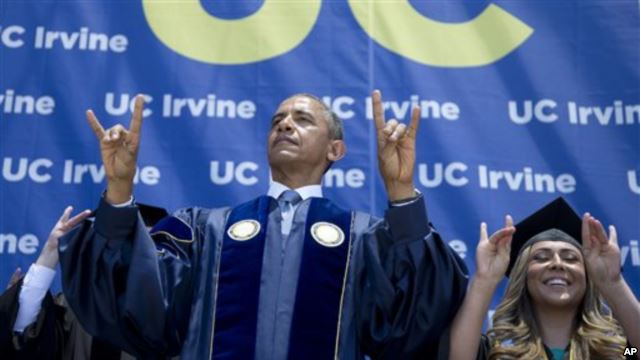 President Barack Obama and student Jacqueline Rodriguez flash the symbol of the school mascot “Anteaters” of the University of California, Irvine, in Anaheim, June 14, 2014.

U.S. President Barack Obama Saturday took aim at congressional Republicans and others who dispute climate change, as he issued a call to action on global warming during a commencement speech at the University of California, Irvine.

The president told graduating students Saturday that Congress “is full of folks who stubbornly and automatically reject the scientific evidence.” He likened those who deny climate change to people who would have told President John F. Kennedy, at the dawn of the space program, that the moon “was made of cheese.”

Obama’s address to about 8,000 graduates comes two weeks after he announced a plan to dramatically cut pollution from power plants.

Obama also used the appearance to announce the creation of a $1 billion competitive fund for states and communities affected by severe weather. He said the funds would be awarded to state and local authorities with the most innovative plans for rebuilding in a way that protects against future disasters.