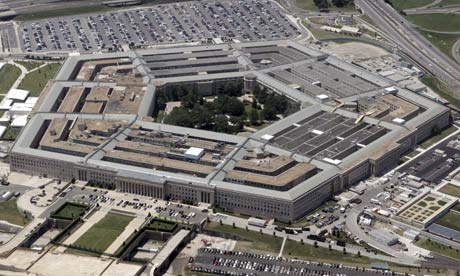 The Pentagon is funding social science research to model risks of “social contagions” that could damage US strategic interests. Photograph: Jason Reed/REUTERS

A US Department of Defense (DoD) research programme is funding universities to model the dynamics, risks and tipping points for large-scale civil unrest across the world, under the supervision of various US military agencies. The multi-million dollar programme is designed to develop immediate and long-term “warfighter-relevant insights” for senior officials and decision makers in “the defense policy community,” and to inform policy implemented by “combatant commands.”

Launched in 2008 – the year of the global banking crisis – the DoD ‘Minerva Research Initiative’ partners with universities “to improve DoD’s basic understanding of the social, cultural, behavioral, and political forces that shape regions of the world of strategic importance to the US.”

Among the projects awarded for the period 2014-2017 is a Cornell University-led study managed by the US Air Force Office of Scientific Research which aims to develop an empirical model “of the dynamics of social movement mobilisation and contagions.” The project will determine “the critical mass (tipping point)” of social contagians by studying their “digital traces” in the cases of “the 2011 Egyptian revolution, the 2011 Russian Duma elections, the 2012 Nigerian fuel subsidy crisis and the 2013 Gazi park protests in Turkey.”

Twitter posts and conversations will be examined “to identify individuals mobilised in a social contagion and when they become mobilised.”

Another project awarded this year to the University of Washington “seeks to uncover the conditions under which political movements aimed at large-scale political and economic change originate,” along with their “characteristics and consequences.” The project, managed by the US Army Research Office, focuses on “large-scale movements involving more than 1,000 participants in enduring activity,” and will cover 58 countries in total.

Last year, the DoD’s Minerva Initiative funded a project to determine ‘Who Does Not Become a Terrorist, and Why?’ which, however, conflates peaceful activists with “supporters of political violence” who are different from terrorists only in that they do not embark on “armed militancy” themselves. The project explicitly sets out to study non-violent activists:

“In every context we find many individuals who share the demographic, family, cultural, and/or socioeconomic background of those who decided to engage in terrorism, and yet refrained themselves from taking up armed militancy, even though they were sympathetic to the end goals of armed groups. The field of terrorism studies has not, until recently, attempted to look at this control group. This project is not about terrorists, but about supporters of political violence.”

The project’s 14 case studies each “involve extensive interviews with ten or more activists and militants in parties and NGOs who, though sympathetic to radical causes, have chosen a path of non-violence.”

I contacted the project’s principal investigator, Prof Maria Rasmussen of the US Naval Postgraduate School, asking why non-violent activists working for NGOs should be equated to supporters of political violence – and which “parties and NGOs” were being investigated – but received no response.

Similarly, Minerva programme staff refused to answer a series of similar questions I put to them, including asking how “radical causes” promoted by peaceful NGOs constituted a potential national security threat of interest to the DoD.

Among my questions, I asked:

“Does the US Department of Defense see protest movements and social activism in different parts of the world as a threat to US national security? If so, why? Does the US Department of Defense consider political movements aiming for large scale political and economic change as a national security matter? If so, why? Activism, protest, ‘political movements’ and of course NGOs are a vital element of a healthy civil society and democracy – why is it that the DoD is funding research to investigate such issues?”

Minerva’s programme director Dr Erin Fitzgerald said “I appreciate your concerns and am glad that you reached out to give us the opportunity to clarify” before promising a more detailed response. Instead, I received the following bland statement from the DoD’s press office:

In 2013, Minerva funded a University of Maryland project in collaboration with the US Department of Energy’s Pacific Northwest National Laboratory to gauge the risk of civil unrest due to climate change. The three-year $1.9 million project is developing models to anticipate what could happen to societies under a range of potential climate change scenarios.

From the outset, the Minerva programme was slated to provide over $75 million over five years for social and behavioural science research. This year alone it has been allocated a total budget of $17.8 million by US Congress.

An internal Minerva staff email communication referenced in a 2012 Masters dissertation reveals that the programme is geared toward producing quick results that are directly applicable to field operations. The dissertation was part of a Minerva-funded project on “counter-radical Muslim discourse” at Arizona State University.

The internal email from Prof Steve Corman, a principal investigator for the project, describes a meeting hosted by the DoD’s Human Social Cultural and Behavioural Modeling (HSCB) programme in which senior Pentagon officials said their priority was “to develop capabilities that are deliverable quickly” in the form of “models and tools that can be integrated with operations.”

Although Office of Naval Research supervisor Dr Harold Hawkins had assured the university researchers at the outset that the project was merely “a basic research effort, so we shouldn’t be concerned about doing applied stuff”, the meeting in fact showed that DoD is looking to “feed results” into “applications,” Corman said in the email. He advised his researchers to “think about shaping results, reports, etc., so they [DoD] can clearly see their application for tools that can be taken to the field.”

Many independent scholars are critical of what they see as the US government’s efforts to militarise social science in the service of war. In May 2008, the American Anthropological Association (AAA) wrote to the US government noting that the Pentagon lacks “the kind of infrastructure for evaluating anthropological [and other social science] research” in a way that involves “rigorous, balanced and objective peer review”, calling for such research to be managed instead by civilian agencies like the National Science Foundation (NSF).

The following month, the DoD signed a memorandum of understanding (MoU) with the NSF to cooperate on the management of Minerva. In response, the AAA cautioned that although research proposals would now be evaluated by NSF’s merit-review panels. “Pentagon officials will have decision-making power in deciding who sits on the panels”:

“… there remain concerns within the discipline that research will only be funded when it supports the Pentagon’s agenda. Other critics of the programme, including the Network of Concerned Anthropologists, have raised concerns that the programme would discourage research in other important areas and undermine the role of the university as a place for independent discussion and critique of the military.”

According to Prof David Price, a cultural anthropologist at St Martin’s University in Washington DC and author of Weaponizing Anthropology: Social Science in Service of the Militarized State, “when you looked at the individual bits of many of these projects they sort of looked like normal social science, textual analysis, historical research, and so on, but when you added these bits up they all shared themes of legibility with all the distortions of over-simplification. Minerva is farming out the piece-work of empire in ways that can allow individuals to disassociate their individual contributions from the larger project.”

Citing a summary critique of the programme sent to HTS directors by a former employee, Price reported that the HTS training scenarios “adapted COIN [counterinsurgency] for Afghanistan/Iraq” to domestic situations “in the USA where the local population was seen from the military perspective as threatening the established balance of power and influence, and challenging law and order.”

One war-game, said Price, involved environmental activists protesting pollution from a coal-fired plant near Missouri, some of whom were members of the well-known environmental NGO Sierra Club. Participants were tasked to “identify those who were ‘problem-solvers’ and those who were ‘problem-causers,’ and the rest of the population whom would be the target of the information operations to move their Center of Gravity toward that set of viewpoints and values which was the ‘desired end-state’ of the military’s strategy.”

Such war-games are consistent with a raft of Pentagon planning documents which suggest that National Security Agency (NSA) mass surveillance is partially motivated to prepare for the destabilising impact of coming environmental, energy and economic shocks.

James Petras, Bartle Professor of Sociology at Binghamton University in New York, concurs with Price’s concerns. Minerva-funded social scientists tied to Pentagon counterinsurgency operations are involved in the “study of emotions in stoking or quelling ideologically driven movements,” he said, including how “to counteract grassroots movements.”

Minerva is a prime example of the deeply narrow-minded and self-defeating nature of military ideology. Worse still, the unwillingness of DoD officials to answer the most basic questions is symptomatic of a simple fact – in their unswerving mission to defend an increasingly unpopular global system serving the interests of a tiny minority, security agencies have no qualms about painting the rest of us as potential terrorists.