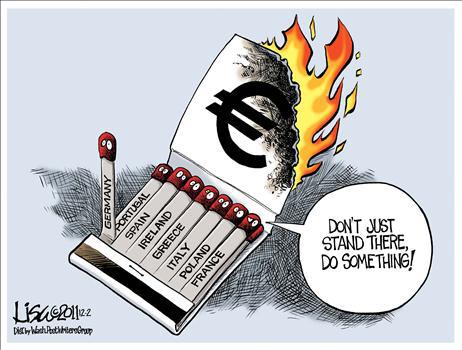 – Alasdair Macleod: All You Need To Know About Negative Interest Rates (ZeroHedge, June 10, 2014):

Last Thursday, the European Central Bank (ECB) took the historically unprecedented step of lowering certain of its interest rates below 0%. In a report to our premium subscribers immediately following the announcement, Chris likened the move to the policy equivalent of dropping a neutron bomb.

In the days following, despite the ECB attempting to clarify its stance further, many questions still linger; most notably: What exactly will the implications of this negative interest rate (NIRP) policy be?

We’ve asked our European correspondent, Alasdair Macleod, to lay things out in black as white as much as is possible. In this detailed podcast with Chris, he explains exactly what steps the ECB is undertaking, what the most probable ramifications will be, and where the highest degrees of risk now lie:

The reason we have got into this silly situation  is you have got a two-way pull. On the one hand, you have got the central banks saying we need to get this economy going; which basically means that banks have got to lend to non-financial corporations in the EU in order to get these economies going. This is the sort of standard central bank mantra.

But the banks on the other hand in Europe are horrendously over-geared. When you look at a large bank like Deutsche Bank, you see its balance sheet is something like 55 times geared. I mean, it is enormous. The European banks have on the whole not managed to repair their balance sheets since the Lehman crisis in the way in which U.S. banks have. This leaves the EU banking system fundamentally weak and vulnerable. The banks know it. They would rather hold sovereign debt guaranteed by the ECB. They would rather put money on deposit with the ECB in order to lessen the systemic risk. Because otherwise they will lend it out to their peers and through the interbank market. They are now being told: Look, we will charge you for the facility.

Again, what the ECB is trying to do is they are trying to encourage banks to lend to the non-financial sector.

Now, there is another aspect of this. That is that they are making money available under something called the Targeted Long-Term Refinancing Operations (TLTRO). Now, under this, a bank can borrow from the ECB the equivalent of a bank’s loans to the non-financial sector, excluding mortgage lending, at 10 basis points above the ECB’s base rate of 0.15%. In other words, if you are a bank, a Eurozone bank, you can borrow from the ECB at a 0.25% for four years until September, 2018. Now the initial sizes of this facility is 400 billion Euros, but there will be further charges available in September and December.

You can see that here we have the ECB on the one hand and the banks on the other. The banks in the system have got the problem that some of the biggies are horrendously over-geared. But unless the ECB can get the economy going, the whole thing is going to fall over. Don’t worry about the gearing lads, we’ll make the money available. Just go out and lend it!

You can see that this is a very serious development. Just to give you a sort of a little bit of a flavor for the problem from the ECB’s point of view. Inflation in the European monetary union has fallen to roughly 0.5%. This is against the target of 2% (bear in mind that the next set of bank balance sheet stress tests assumes the most extreme adverse scenario is an inflation rate of 1% percent…)

So, we are already at 0.5%. From the ECB’s point of view, they are looking at something which is terrifying them: that’s deflation. If you get deflation, then sovereign debt ratios are likely to spiral yet higher despite any austerity packages that countries like Spain or Italy might bring in. To illustrate this point, I think I am right in saying that today the Italy, Holland, and the Portuguese economies actually contracted in the first quarter of 2014. France, which was a biggie had zero growth. Now, you can see that if you have got declining and sort of falling prices in this environment. How and if you look at prices relative to the mountain of debt that these countries how, you can see that suddenly all sorts of ratios start looking very nasty. It is that, I think that the ECB is absolutely desperate to stop.

The reason they have announced NIRP the way they have is they want to drive the Euro lower. I think they feel that if they can have a lower Euro, then that will stop prices falling and indeed hopefully perk them up a little bit. But this whole idea is killing savings. I mean, central banks have been trying to do this ever since they have bought into the Keynesian theories. It has got us into a cycle of just worse and worse credit defaults. They are giving the medicine which historically has been proven to kill us. They are just doubling the doses.

This is not going to succeed, I fear. I’m not sure that the very short-term benefits that you sometimes see when they ease a currency are likely to follow through, because the whole point about driving a currency lower is that you persuade people against all reason that things are looking better. Businesses will employ people because they see that their margins are improving. They can start selling things again. That is the sort of basically the Keynesian mean.

At this point, I think this has been tried so many times that industry in the Eurozone and indeed elsewhere is no longer persuaded by this argument. I think everybody is now sitting on their hands and saying well, we actually do not really want to do very much. Because we just see risk, risk, risk. I don’t think that the ECB can actually get around that fundamental problem with these latest measures. Everybody still sees risk. It may drive the Euro lower which may rescue the inflation rate from falling below 0.5%, but I really don’t see that it is going to be more effective than that.

You see, Mario Draghi (the head of the ECB) is dealing with is a post Keynesian-world where our problem of Too Much Debt cannot be admitted. His objective as an appointed head of a central bank is to keep the show on the road at all costs; that’s really what we are talking about. The level of debt and the amount of mal-investment in the whole system is immense. At the same time, they’re killing all of the savers.

Here again, instead of doing what is the sensible thing to do — that is, for us to save rather than spend — they are doing the reverse. That they are effectively eliminating savings from the system and replacing it with newly-printed fiat money and bank credit. That’s the attempt, and I have to say that I think it’s bound to fail.

The ECB now finds itself on the cusp of this failure. Remember, there are some very big banks with gearing over 40-50 times. All you need is a fall in prices of 1%, 2%, or 3% for a few companies to go bust, and then those banks are no longer solvent. It is a nightmare scenario. It really is.

Click the play button below to listen to Chris’ interview with Alasdair (55m:48s):