While the endless propaganda regurgitated from every media outlet will have the average American believe (inbetween trips to collect and cash unemployment checks) that in the first quarter the economy crashed due to weather, or that millions of Americans are bailing on the labor force – oddly enough, most of those Americans are in in the 16-19 age group: retiring early, right?… 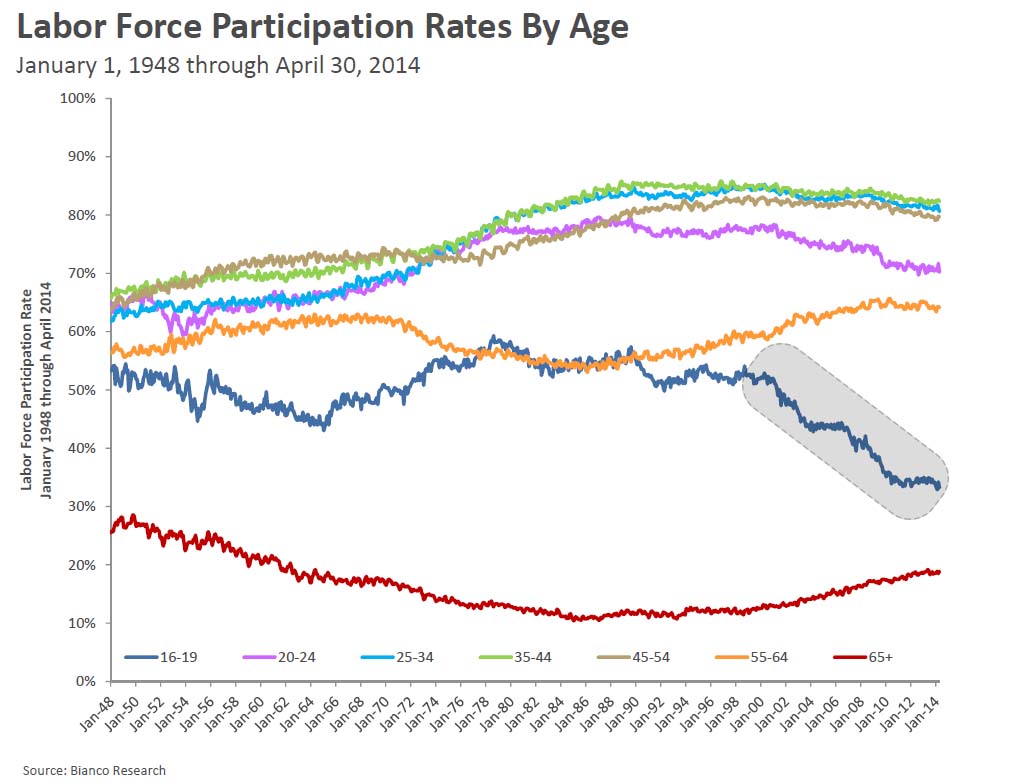 … the reality is far, far simpler: the myth of the US economic recovery is nothing more than a lie of mythic proportions.

Take Generation X: those millions of Americans born between 1960 and 1980 who in a truly recovering and thriving economy would be at the forefront of career opportunities and of wealth creation. Instead, as an extended Bloomberg profile of Gen X shows, there has hardly been a generation in worse shape than Americans between their mid-30s and mid-40s… perhaps with the exception of Gen Y, and the Millennials of course.

So propaganda aside, what is life really like for a group of people that in a parallel universe, one with a truly vibrant, growing economy, should have never been better? Sadly, “life” as it is lived and not shown on TV makes one wonder if X stands for Exterminate.

Take Vera Johnson from Seattle. Vera, one of the several Gen-Xers profiled by BBG, “is barely making do, let alone saving for retirement.”

“I try to remain in the present moment and not live in fear of the future,” said Johnson, who has neither retirement savings nor a college fund for her two children. “My property is underwater, the properties around me are underwater, I’m not building equity in my home.”

The 45-year-old almost lost her home to foreclosure in 2010 after the housing-market collapse in the worst recession since World War II. She embodies the financial challenges facing America’s Generation X, those born between the mid-1960s and 1980, which lags behind other generations in building assets.

When their working years end, Gen-Xers might have to live on just half of their pre-retirement income, compared with 60 percent for the Baby Boom generation, Pew said last year.

“Generation X is at this really critical historical spot,” said Diana Elliott, a research officer in financial security and mobility at Pew, a non-profit global research and public policy organization in Washington. “They are not doing well relative to the last generation. It should give us concern as a country.”

Just how badly are they doing? Bad enough to turn around the entire concept of middle-class prosperity in America – one where every next generation should do better than the preceding one – on its head.

Only one-third of Generation X households had more wealth than their parents held at the same age, even though most earn more, The Pew Charitable Trusts found.

And there, in a nutshell, is your so-called recovery: two thirds of an entire generation – one which is in its prime working years – doing worse than their parents!

The rest is just a story of sad anecdotes confirming that not only is there no recovery in America for the average person (the average billionaire… well that’s a different story entirely), but that things are, in fact, going from bad to even worse.

First, it is the overall collapse in wealth:

Gen-Xers lost about half of their wealth between 2007 and 2010, according to a Pew Economic Mobility analysis last year. Even before the housing collapse, they were having trouble keeping up with their parents in building assets, according to Pew, which defines Generation X as people born between 1966 and 1975.

“Gen-Xers are the least financially secure and the most likely to experience downward mobility in retirement,” the Pew analysis found last year.

The bursting of the dot-com bubble, which culminated in a 67 percent drop in the Nasdaq Composite Index (CCMP) from 2000 to 2002, was a particularly severe blow to Gen-Xers just starting their careers. While most didn’t directly own stocks, the economy slipped into recession and unemployment for 25- to 34-year-olds in 2003 hit its highest level in almost a decade.

Then it is the impact of record amounts of student loans pushing Gen-Xers even further down:

“Under the impact of successive booms and busts, many Xers have struggled to afford a family or keep their home, much less do better than their parents,” Neil Howe, co-author with William Strauss of books on generations in American history, said at a May 8 research symposium in St. Louis. “Then came the Great Recession, which hit Xers much harder.”

The median income for 35- to 44-year-olds dropped 9.1 percent in the three years ended in 2010, according to the Federal Reserve’s Survey of Consumer Finances. Incomes of those age 35 or less, including the youngest Gen-Xers and Millennials, fell 10.5 percent.

While incomes of 35- to 44-year-olds deteriorated less than those of younger Americans, their net worth slumped by 54 percent, the most for any age group, as the value of stock holdings and properties declined. The median net worth of those younger than 35 declined 25 percent.

Then, it was pure greed: everyone rushed during the last housing bubble to buy up McMansions and everyone knows how that ended (hint: the same way the current bubble will end). Greed that destroyed everyone who succumbed to temptation and did not get a government bailout:

The group aged 35 to 44 fared badly in part because its members had taken on debt to buy real estate at just the wrong moment, said William Emmons, senior economic adviser at the St. Louis Fed’s Center for Household Financial Stability. Those born from 1978 to 1983, straddling the line between Gen-Xers and Millennials, are at “ground zero” as the age group hurt most severely by the housing crisis, he said.

“Generation X was hit the hardest,” Emmons said. “For those families themselves, there’s limited time to make up some of those losses. For the economy overall, families that are struggling pretty hard to make up their savings aren’t spending as much, so that’s a drag.”

Then it was tumbling real estate valuations, and the switch from owning to renting:

Gen-Xers were also slammed by the slump in stocks. The 35-to 44-year-old age group’s median value of financial assets, including stocks and bonds, dropped 47 percent to $14,500 in 2010 from 2007. The hit to their portfolios was more than 5 percentage points bigger than for any other age group.

The value of the group’s directly held stock portfolios lost 36 percent, Fed data show. While those who stayed invested in stocks may have recouped losses as the S&P 500 Index (SPX) has rallied to new highs, only 12 percent directly held equities in 2010, compared with a 17 percent share three years earlier.

Most importantly, it is the job market: which as everyone who is actually in it, knows is nowhere near as rosy the unicorns and rainbows the BLS and the US department of truth would like to make it seem.

What’s more, limited improvement in the labor market is making it more difficult to rebuild assets. “It looks pretty bad,” said Amir Sufi, an economist at the University of Chicago’s Booth School of Business. “If you don’t have income, you can’t build wealth.”

The plight of Gen-Xers also means less support for the economy as they limit spending and concentrate on building up nest eggs, Emmons said.

Matthew Kraft, out of work for about a year, is watching fewer movies at the theater and dining out less. The 39-year-old former public relations manager in New York has filled out more than 110 applications to find something other than entry-level work.

“If this keeps going on for another four or five months, it’s going to start to hurt,” said Kraft, whose wife works at a hedge fund. “We have been living off of her income and dipping into our savings.”

But the scariest part will be when Gen-X starts retiring for one simple reason: nobody has anywhere near the funds they will need for provide for retirement, even if one assumes that the US welfare system is still solvent in a decade or so.

Generation X has already forfeited valuable years of interest compounding by failing to accrue savings early, said Alicia Munnell, the director of the Center for Retirement Research at Boston College and former research director at the Federal Reserve Bank of Boston.

“Gen-Xers are going to live longer than the current generation of retirees, and the major source of retirement income is going to be smaller,” Munnell said. After 40, if “you’ve put this off, you really have to save at a mind-boggling rate to accumulate enough to retire.”

As for Johnson, a mother of a 17-year-old daughter and a 12-year-old son, she’s more concerned about day-to-day living than about preparing for retirement.

That’s ok Mrs. Johnson, you are in the same boat as all “developed” nations: the only concern is how to keep the lie of solvency going day-to-day rather than addressing, let alone tackling, the reality of the terminal dilemma: a systemic collapse, or hyperinflation, that is just beyond the horizon.

And now, buy stawks because… the recovery!

1 thought on “Generation X(terminate): Two Thirds Of Gen X Households Have Less Wealth Than Their Parents Held At The Same Age”