“The challenges of managing student loan debt can lead some borrowers to fall behind on their loan payments and in some cases even default on their debt obligation,” notes the always astute White House… and so it’s time to do something about that… by bailing the bad debtors out with US taxpayers money. As we have been vociferously warning, not only has the student loan debt bubble expanded massively (as the easiest credit substitute for real-world working and unemployment) but delinquencies on the ‘easily available’ credit is soaring with “consequences such as a damaged credit rating, losing their tax refund, or garnished wages.” Consequences, as we have been taught now, are not acceptable for this administration and so President Barack Obama will issue an executive action on Monday aimed at making it easier for young people to avoid trouble repaying student loans.

As we noted previously, the amount of heavily delinquent student loans has just hit a fresh record high of $124.3 billion, up from $121.5 billion in the prior quarter. 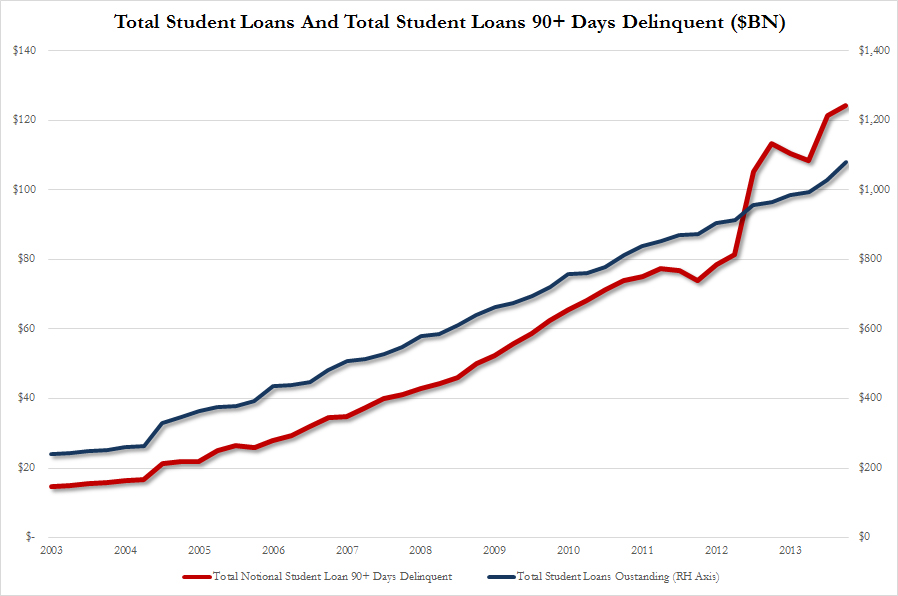 So: when does the Fed finally admit i) there is a student loan problem and ii) the only way to solve said problem is to promptly monetize it?

or iii) A Federal Government bailout…

The president will sign an order directing the secretary of education to ensure that more students who borrowed federal direct loans be allowed to cap their loan payments at 10% of their monthly incomes, the official said.

Federal law currently allows most students to do this already. The president’s order will extend this ability to students who borrowed before October 2007 or those who have not borrowed since October 2011, the official said.

The administration says this action will help up to 5 million more borrowers, although it will not be available until December 2015.

More broadly, the administration is looking for ways to stimulate faster economic growth without relying on legislation…

Preventing student loan repayment problems fits with that goal because officials say it will help young workers avoid credit blemishes that will hurt them down the road.

“Many student loan borrowers are working and trying to responsibly make their monthly payments, but are nonetheless struggling with burdensome debt,” the White House official said.

“The challenges of managing student loan debt can lead some borrowers to fall behind on their loan payments and in some cases even default on their debt obligation, with such consequences as a damaged credit rating, losing their tax refund, or garnished wages,” the White House official said.

Perhaps its time to reassess whether taking on massive indentedness for a degree that leaves you earning minimum wage anyway is a sensible idea.

Now we are sure there will be no unintended consequences from this law… no sudden spike in non-payment, no tumble in loan bundle values, and no collateral chain follow through…

The number of borrowers in the income-based repayment programs climbed 24% from January through March to 1.63 million, the Education Department recently said.

The amount of debt covered by the programs grew 22% during that period to $88 billion—nearly one-tenth of all outstanding federal student debt. 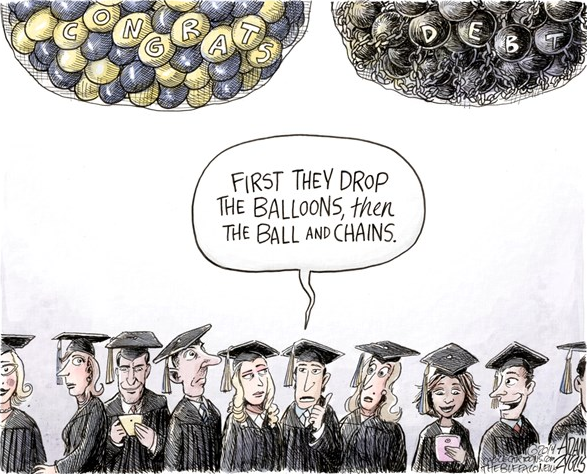