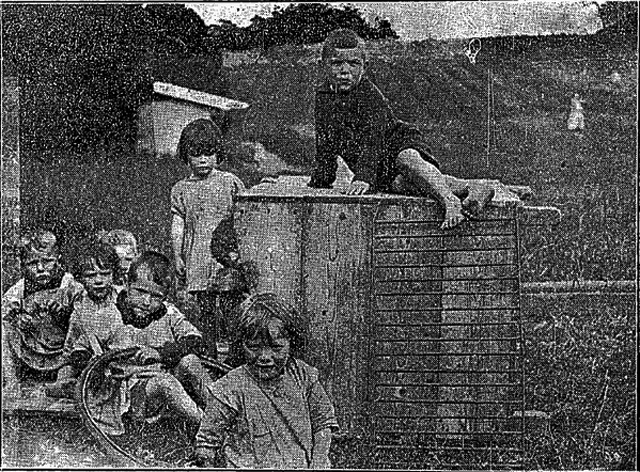 Reader I.G. has sent me the following per email:

The following is not for the faint hearted. This news item is posted here because there is still no Garda or State outcry or investigation. If you wish to help fund a memorial stone for the 800 babies – the contact details are at the end of this post.

The following exerpts are from national newspapers:

– Silence from Self-Described Pro-Life Groups Over Mass Burial of 800 Babies:

If you dominate women’s fertility, as the Catholic clergy did for decades, you control society. If you long to keep that control alive, as the extremists do, you’ll cling to the strategies that worked in the past and you certainly won’t be thinking of the demented, sexually-frustrated evil nuns and brothers who took their rage out on the unfortunates – Here is a grave containing the remains of eight hundred babies and toddlers. Eight hundred! And yet the national police force has so far failed to make any inquiries. Why are we not shouting about this from the rooftops?

– Opinion: Mass grave ‘filled to the brim with tiny bones and skulls’ shows how we cherish children:

Unmarried mothers incarcerated until they signed over their babies, healthy children sold to be adopted by wealthy Americans and disabled infants, who had no sale value, abandoned in “Dying Rooms”, and their bodies dumped by the brides of Christ in a septic tank. This was a nationwide industry founded on human suffering. In a country utterly corrupted by its own twisted version of Catholicism and run by a complicit elite, young women who “fell pregnant” were condemned. They had sinned and were left to the mercy of perverts and brutes. Their children were a tainted commodity to be sold or discarded at the whim of people considered “religious”. A further horror is that it seems highly unlikely Tuam was the only mother and baby home which starved infants and crammed their tiny bodies into unmarked graves. The dead children must number in the thousands. To quote Bob Dylan, “Even Jesus would never forgive what you do”.

“The research suggests that the mortality rate in these homes was in excess of double the national average,” she said. “These were state-funded homes. Anybody who suggests the nuns were doing their best….They were NOT doing their best. They tendered for this business (and) wanted this business. “They got a headage payment for every mother and child in their so-called care, which was greater at the time than the average industrial wage.” She added that any plan for a memorial at the Tuam home was “just not good enough”. “There has to be an investigation,” she said. 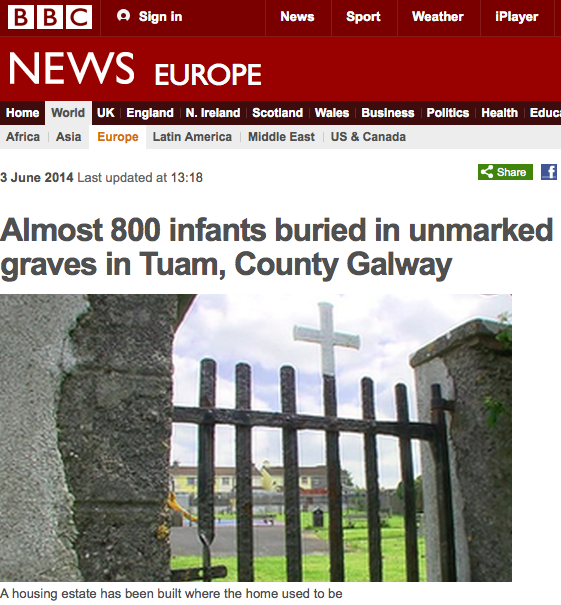 almost 800 babies were buried in a mass grave next to a home for unmarried mothers and babies in Tuam, Co. Galway between 1925 and 1961 – three newspaper clippings about the home. in this link

– The Septic Tank Full Of Secrets:

health board inspection report from April 16/17th 1944 which recorded 271 children and 61 single mothers for a total of 333. The ‘Home’ had capacity for 243. The report continues listing children as ‘emaciated’, ‘pot-bellied’, ‘fragile’ with ‘flesh hanging loosely on limbs’. 31 children recorded in the ‘Sun room and balcony’ were ‘poor, emaciated and not thriving’. The oldest child to die, according to the MoS, was Sheila Tuohy, aged 9 in 1934. The youngest was Thomas Duffy, aged two days.

– When a child dies every fortnight for 40 years its no accident but process – 796 dead at St.Mary’s Mother and Baby Home:

This system was ran by the same religious institutions that shamed and punished women who had sex outside of marriage and which campaigned to keep contraception and abortion illegal and inaccessible. They still continue to do so to this day, next time one of them refers to themselves as pro-life remember the deaths behind their empty rhetoric.

During its years of operation the children of The Home were referred to as “inmates” in the press. It was believed by the clergy that the harsh conditions there were in themselves a form of corrective penance.

– ‘It’s time to do something’ – The forgotten mass grave of 800 babies in Galway:

A group of us came together late last year, formed a committee, and decided that, when we discovered the enormous amount of children in that plot, it was time to do something. Local authorities have so far donated €2,000 towards the memorial, but those involved hope to raise €5,000 to build a plaque containing all 796 names and a small statue. However, fundraising efforts have been slow so far. “People aren’t really talking about the discovery,” she said. People don’t seem shocked, I don’t understand. “If two children were discovered in an unmarked grave, the news would be everywhere. We have almost 800 here.” Corless has said that if anyone is looking for information about relatives who may have been at the home, or wishes to donate, they can contact her on catherinecorless@hotmail.com.