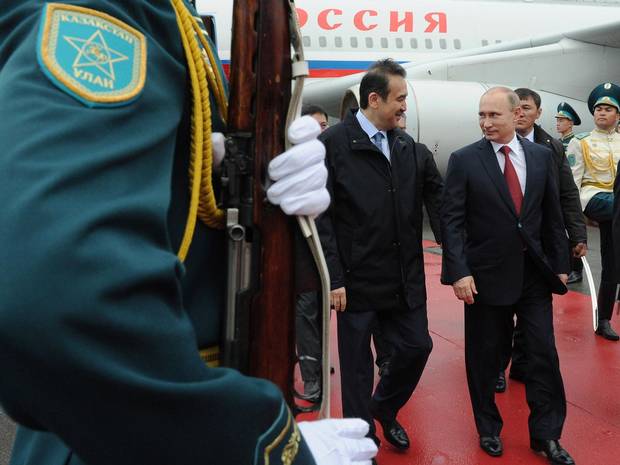 Vladimir Putin has moThe President met his counterparts from Kazakhstan and Belarus in the Kazakh capital, Astana, to initiate the formation of the Eurasian Economic Union. He has long sought to form the bloc in hopes that it would provide an eastern counterweight to economic and political powerhouses such as the EU and the US.

The codes of the union, set for launch on 1 January 2015, will give the citizens of member states equal employment and education opportunities across all three nations. The three presidents also said that the deal would involve collaborative policies on energy, technology, industry, agriculture and transportation.

“A new geo-economic reality of the 21st century is being born today,” said the Kazakh President, Nursultan Nazarbayev, The deal, 20 years in the making, was “a hard-won achievement,” he said.

The Kazakh First Deputy Prime Minister, Bakytzhan Sagintayev, told reporters the three countries had not discussed the possibility of instituting a single currency.

Meanwhile, regional moves  by Russia continue to spur anxiety. Poland’s ambassador to the US, Ryszard Schnepf, told reporters in Washington that his country was looking for a clear commitment of support from President Barack Obama during his visit next week. Mr Schnepf said Poland would welcome a greater US military presence in the region as a check against potential Russian aggression. He said Europe and the US “need to take the steps to prevent the future possible aggressions.”

Some analysts quickly dismissed the Eurasian Economic Union, saying it was likely to have little practical impact. “I don’t believe that the Eurasian union is [going to be] able to open the door for modernisation,” said Alexey Malashenko, an analyst at the Carnegie Endowment’s Moscow Centre. “That’s a big deal, because without modernisation and real economic reforms, what does it mean?”

But the idea of a Eurasian union has become particularly attractive to the Kremlin because the Ukraine crisis has sent US-Russian ties tumbling to their lowest point since the Cold War. Western powers have levelled sanctions against key Russian figures linked to Moscow’s annexation of Ukraine’s autonomous Crimea region two months ago, and broader sanctions may be on the way. In March, the former US Secretary of State, Hillary Clinton, accused Mr Putin of seeking to revive the Soviet Union, which collapsed in 1991. The Soviet Union included Kazakhstan, Belarus, Ukraine and 11 other states, most of which remain under Russia’s influence.

Mr Putin has denied any intention to annex former Soviet republics, even though Moscow has backed pro-Russian separatists in Ukraine and other former Soviet lands. On Thursday, he said other countries were scrambling to join the Eurasian Union. The participants discussed Armenia’s potential membership during their meeting. It was unclear which other countries Mr Putin thinks will join.

It also remained unclear whether the union would constitute an economic arrangement or something more political, Mr Malashenko said. The Ukraine crisis has made it “clear” that the Eurasian union is “a tool for Russia to realise its political goals,” he said.

Inside Russia, many people are frustrated with what they see as domineering US foreign policy and economic might, and they are angry at Russia’s flagging economy and endemic corruption. The combination makes the idea of a Russian revival – and commanding new attention on the world stage – increasingly popular. And thus, so is the concept underpinning the Eurasian Economic Union.