So going after the dregs of Al-Qaeda, predictably, was always an interregnum kindergarten play; now it’s all about the grown-ups, the dragon and the bear.

Still, Obama remains a helpless captive of the Dick Cheney regime “war on terror” logic, emphasizing “the capacity of terrorists to do harm.” But now the modus operandi is softened: call it the Take It to the Morgue – Quietly doctrine.

Take it to the Morgue – Quietly, will be applied to the renewed “support” for “moderate” Syrian opposition fighters, which will keep dragging Jordan, Lebanon, Turkey and Iraq down. Leslie Gelb, former president of the ultra-establishment Council on Foreign Relations, suggests the Obama administration may have finally understood that the real fight is against jihadis of the Jabhat al-Nusra and Islamic State of Iraq and the Levant (ISIL) kind, and not Bashar Assad, but that remains to be seen.

Meanwhile, Take it to the Morgue – Quietly is happening right now in Donetsk, with the Kiev regime changers – fully backed by Washington – denying, Pentagon-style, that any civilians have been killed by the current “anti-terrorist” operation. Donetsk civilians are the new targets in vogue, replacing Pashtun marriages in the Pakistani tribal areas.

All about ‘take it to the morgue – quietly’

Obama wants Congress to approve a new “Counter-Terrorism Partnerships Fund” of up to $5 billion, which translates as Take it to the Morgue – Quietly, awash in taxpayer money, applied to Yemen, Somalia, Libya, Mali and assorted unspecified latitudes to be ploughed by AFRICOM.

Obama wants to “mobilize allies and partners to take collective action”, as in resurrecting the trademark Dick Cheney regime era’s “coalition of the willing”. “Broadened” tools of action may – and the operative word is “may” – include diplomacy and development. But it will really boil down to “sanctions and isolation,” as applied to Iran, Syria and now Russia.

There will also be “appeals to international law, and, if just, necessary, and effective, multilateral military action.” Translation: “international law” will be openly mocked, as in instances of the “responsibility to protect” (R2P) scam; and if all fails, a “just” war, coalition of the willing-style, is back in the cards.

The whole planet should take all this lying down, because, after all, this administration will “be transparent about both the basis for our actions and the manner in which they are carried out, whether it is drone strikes, or training partners.”
Of course, one should never forget that “the US should lead by example” and cares nothing but to “extend peace and prosperity around the globe.” So shut up, everyone, and no questions about the covert CIA drone scam in Pakistan, or about “collateral damage” in Donetsk.

Right after Obama announcing his recycled, convoluted, Pentagon-driven pivoting-with-himself, the Masters of the Universe are gathering at the annual and still very secret Bilderberg conference at the Marriott in Copenhagen. Bilderberg is essentially Atlanticist exceptionalism in action. Here is a delicious appraisal of the early proceedings.

And what a juicy guest list Bilderberg yields – from Breedlove, Lagarde and NATO “Fogh of War” Rasmussen to Petraeus, Kissinger and Zoellick, the Gotha of Western banking, the usual media suspects from The Economist to the Financial Times, Google’s Eric Schmidt, the Prince of Darkness Richard Perle, and even – quite fascinating – for the first time, a key Chinese official.

That’s Liu He – the deputy director of the National Development and Reform Commission and the real eminence grise behind Beijing’s complex network of committees and policy makers in charge of implementing ambitious, wide-ranging economic reform. So was Liu He invited by Bilderberg as a seducing operation? Or did Beijing manage to infiltrate him via its wide-ranging Atlanticist contacts?

The ‘masters of the universe,’ anyway, are scared. There are two main interconnected themes to be discussed in Copenhagen, both with Russian President Vladimir Putin at the center: the clash between Russia and NATO in Ukraine, and the BRICS push to build a multipolar world order. 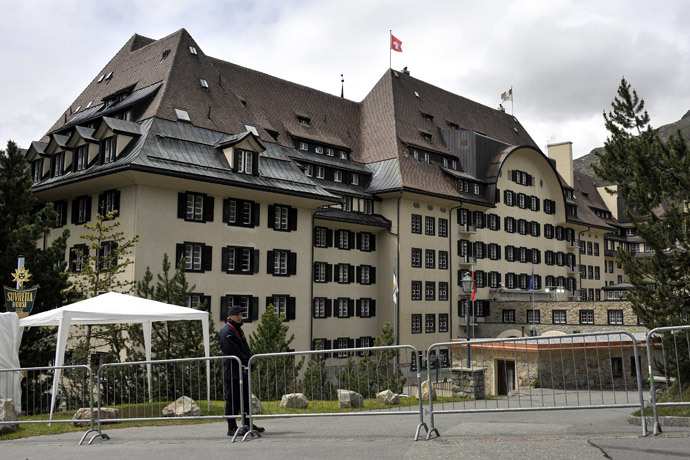 Bilderberg happens right after the St. Petersburg forum, which consolidated the Russia-China alliance, and just as the Eurasian Economic Union was officially spawned in Astana. The inevitable march towards a multipolar system carries with it the progressive bypassing of the US dollar, and by consequence weakens the NATO/Atlanticist axis. The Bilderberg guest list is eminently a NATO affair.

So picture a series of meetings discussing, for instance, how the Bank of China and VTB, Russia’s second largest bank, now settle everything in yuan or rubles, and established a bilateral investment committee. Not to mention how the BRICS and the 115-nation Non-Aligned Movement (NAM) are developing non-exceptionalist strategic partnerships, which crucially include trading in their own currencies and not the US dollar.

Then there’s the anti-EU mass revolt crystallized this past Sunday at the European parliament elections. With many shades of grey, that’s an anti-exceptionalist revolt. It threatens a key new Bilderberg plank, the coming of a massive US-Europe free trade area symbolized by the secretly negotiated Transatlantic Trade and Investment Partnership (TTIP), widely opposed by average European citizens.

It’s no accident that the key negotiator both in the TTIP and the Trans-Pacific Partnership (TPP) – which aims to sideline China in Asia – is the Obama administration’s Trade Representative, Michael Froman, your typical Wall Street exceptionalist.

And then, there’s the upcoming Shangri-La Dialogue in Singapore, which I described last year as the Spielbergs and Clooneys of the military universe all in one Star Wars room (actually a ballroom at the Shangri-La Hotel). This is exceptionalism marinated in Asian spices.

And once again China is drawing attention, by sending the formidable Fu Ying, a.k.a. the Iron Lady, who currently is Chair of the Foreign Affairs Committee at the National People’s Congress. She is an awesome, take-no-prisoners negotiator and it will be fascinating to see her directly clash with this year’s Shangri-La guest of honor, the militaristic Japanese prime minister and American protégé, Shinzo Abe.

Translation: both in Copenhagen and Singapore, Beijing gets a seat at privileged tables of the current unipolar, exceptionalist order. Yet it aims, self-confidently, not to simply indulge in the banquet, but to undermine it, little by little, from within. The exceptionalist crowd is clever enough to acknowledge the evolving Russia-China alliance and the push towards an alternative order are slowly dissolving its brave old world dream. No wonder they’re so scared.