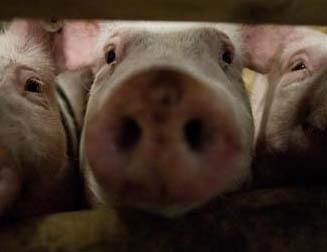 The state and federal effort to stamp out PEDv has operated on an assumption that a pig, once infected, develops immunity and will not be afflicted by the disease again for at least several years. Likewise, farms that had endured the disease were not known to suffer secondary outbreaks.

But a year after the virus was identified, repeat outbreaks have occurred at farms but not been publicly confirmed before now. These so-called secondary outbreaks are a challenge to efforts to stem the disease, which is almost always fatal to baby piglets.

Apparently the state and federal effort ignored the possibility that a virus may, gasp, strike again! “Nationwide, PEDv outbreaks seem to recur in about 30 percent of infected farms, the American Association of Swine Veterinarians told Reuters, confirming for the first time the likelihood of repeated outbreaks.” So it really the first time someone even considered this possibility.

Were they hoping Bernanke would just print more healthy pigs if things didn’t go according to plan? Probably not, but now it is time to scramble to glue the pieces back together:

The U.S. Department of Agriculture is fighting against repeated outbreaks by trying to extend immunity in female hogs through effective vaccines, Chief Veterinary Officer John Clifford told Reuters at the general session of the World Animal Health Organization in Paris. “It happens and it could happen again,” he said about secondary outbreaks of PEDv. “We need to practice good bio-security, cleaning and disinfection, all-in all-out, in order to break the cycle and prevent its re-emergence.”

The one good news, so far, is that the repeat virus does not appear to be a mutant.

In the Indiana case, genetic sequencing showed the “exact same strain” of PEDv hit pigs at the farm in May 2013 and again in March 2014, said Ackerman, who collected samples from the farm.

Piglets born to sows that were infected for a second time have a death rate of about 30 percent, compared to near-total death loss among newborn piglets during the first outbreak, he said.

The incidence of the disease “re-breaking” on farms after it appeared to have been wiped out, indicates that the risk for ongoing severe losses from the virus is bigger than previously expected. The lack of long-term immunity also means hog producers must keep up strict bio-security measures to fight the disease, which has already spread to 30 states.

However, this leads to another just as problematic possibility: the natural immunity to the PED virus is far shorter than expected:

Preliminary results from studies on immunity, directed by the National Pork Board, confirm “immunity does appear not to be very long lived,” said Lisa Becton, director of swine health information for the board. The board has collected more than $2 million for research on PEDv.

Veterinarians and others have been unable to predict the duration of immunity to PEDv in hogs following exposure, in part because the disease had never been in the United States before last year.

Ackerman had thought hogs would have a natural immunity to PEDv for three years after being infected because that is the case for a similar disease called Transmissible Gastroenteritis. “Just because a farm broke with PEDv last year doesn’t mean that they are protected from re-breaking with it this year,” he said in a telephone interview.

Ackerman said he did not know why the female pigs, or sows, on the Indiana farm were re-infected after being exposed to the virus during the original outbreak last year. At the time, they were about six months to a year old. The sows are having piglets and passing limited immunity on to their offspring, he said.

The farm “does an excellent job of sanitation,” he said. “That’s why it’s so hard to figure out why they’re struggling with it.”

The repeat case of PEDv in Indiana puts to rest gossip about a re-break in the state that has passed from one Midwest farmer to another for weeks. Producers are on edge because no vaccine has yet been able to completely protect pigs from the disease.

PEDv is transmitted from pig to pig by contact with pig manure, which contains the virus. It can be transmitted from farm to farm on trucks, and many veterinarians also believe it is spreading through animal feed.

The re-breaking is causing concern among farmers and meat packers across the country, as the PEDv outbreak continues to spread with no definitive solution in sight. “If you have that disease, it causes a huge death loss, and then you get it again,” said Josh Trenary, executive director of Indiana Pork. “It’s pretty clear why it would be concerning.”

The other good news: “The virus does not pose a risk to human health and is not a food safety issue, according to the USDA.”

It does, however, pose a huge risk to human wallets, especially those who enjoy eating pork or bacon, because one should certainly expect hog prices to hit fresh new all time highs shortly, only for the BLS to declare them hedonically overstated due to the return of that perfect substitute for pretty much everything: Pink Slime.

1 thought on “Bacon Prices To Soar Even More: The Pig Diarrhea Virus Is Back For Round Two”