Incident highlights how police are attacking those who document brutality 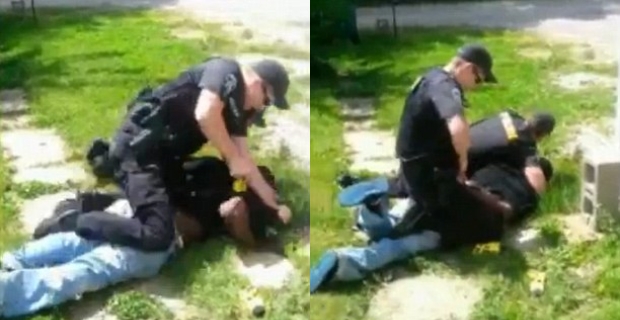 Finally, as one of the officers has the suspect in a headlock, the other handcuffs him as he stops writhing. The woman then demands that they take the suspect to the hospital.

The video ends abruptly as two more officers arrive on the scene and shove the cameraman back, telling him to “step back.”

A physical altercation then takes place with one of the cops saying “give me that damn phone, get the f*** back,” forcing him to stop filming the incident.

From tasering people having a party in their own home, to blinding others with the stun gun during routine traffic stops, a recent spate of incidents have made headlines and spurred protests and unrest in local communities.

In several other recent instances, cops have been caught attempting to seize cell phones, and even deleting footage recorded by people they have come into contact with.

1 thought on “Video: Cops Taser Man 18 Times Then Pounce On Family Member As He Films Incident”