… or else the following photo just tweeted by Michelle Obama of White House canines dining on fine taxpayer-funded china might have seemed just a little inappropriate. 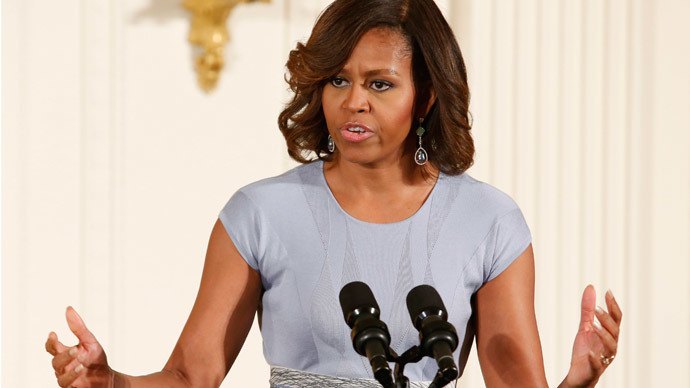 In a speech seniors designed to commemorate the US Supreme Court decision that desegregated schools, First Lady Michelle Obama made a statement against racism to high school students that reminded critics of George Orwell’s “1984.”

Obama spoke to graduating high school students from five area high schools at the Topeka, Kan. Senior Recognition Day on May 16, the day before their graduation ceremony and on the eve of the 60th anniversary of the landmark Brown v. Board of Education Supreme Court decision that outlawed segregation in public schools. The court case began in Topeka in 1951.

Obama spoke of the decision by Topeka parents to fight against the notion of “separate but equal” education for their children.

“Now, these were ordinary folks. Most of them were not civil rights activists, and some of them were probably nervous about speaking up, worried they might cause trouble for themselves and their families. And the truth is, while the black schools were far away, the facilities were pretty decent, and the teachers were excellent,” she said. “But eventually, these parents went to court to desegregate their children’s schools because, as one of the children later explained as an adult, she said, ‘We were talking about the principle of the thing’.”

But after touching on the historic ruling and the important anniversary, the president’s wife quickly moved on to reports that segregation is back in the United States’ public schools. “See, many districts in this country have actually pulled back on efforts to integrate their schools, and many communities have become less diverse as folks have moved from cities to suburbs,” Obama admonished. “And even in schools that seem integrated according to the numbers, when you look a little closer, you see students from different backgrounds sitting at separate lunch tables, or tracked into different classes, or separated into different clubs or activities.”

Obama drew parallels between the fight for integration that was supposed to have ended in 1954 and what students face today.

“So, graduates, the truth is that Brown vs. Board of Ed. isn’t just about our history, it’s about our future,” she said. “Because while that case was handed down 60 years ago, Brown is still being decided every single day –- not just in our courts and schools, but in how we live our lives.”

It was then that critics say the first lady veered off into “thoughtcrime,” a term from Orwell’s dystopian novel “1984,” defined as “an instance of unorthodox or controversial thinking, considered as a criminal offense or as socially unacceptable,” according to the Oxford Dictionaries.

“There’s no court case against believing in stereotypes or thinking that certain kinds of hateful jokes or comments are funny. So the answers to many of our challenges today can’t necessarily be found in our laws,” Obama said. “As you go forth, when you encounter folks who still hold the old prejudices because they’ve only been around folks like themselves, when you meet folks who think they know all the answers because they’ve never heard any other viewpoints, it’s up to you to help them see things differently.”

“Maybe that starts simply in your own family, when grandpa tells that off-colored joke at Thanksgiving, or you’ve got an aunt talks about ‘those people’. Well, you can politely inform them that they’re talking about your friends,” Obama continued. “Because this issue is so sensitive, is so complicated, so bound up with a painful history. And we need your generation to help us break through. We need all of you to ask the hard questions and have the honest conversations, because that is the only way we will heal the wounds of the past and move forward to a better future.”

Cheryl Chumley, a reporter for The Washington Times and the author of “Police State USA,” believes the first lady’s remarks as an overreach, and a way to attack people for politically incorrect thinking. “Michelle Obama’s push for kids around the nation to monitor their family members for perceived racist comments is just another way the government seeks to inject itself into an area it doesn’t really belong — the American home,” she told The Daily Caller.

The author cited other examples of politicians and government agencies aligned with the Obama administration singling people out for thinking differently, including Sen. Harry Reid (D-Nev.) attacking the Koch brothers for donating to conservative causes, the administration’s charge against the gun lobby, and the IRS targeting of Tea Party organizations for audits. “Does it get any more police state than that?” Chumley asks.

Pete Kasperowicz at The Blaze agreed. “First lady Michelle Obama is encouraging students to monitor their older relatives, friends and co-workers for any racially insensitive comments they might make, and to challenge those comments whenever they’re made,” he wrote.

So did Jim Treacher at The Daily Caller. “There can be no aspect of your daily life that’s removed from politics. Now you will be monitored by your own children for expressing unapproved opinions,” he wrote. “You’d better watch what you say at the dinner table, Mom and Dad,” he wrote.

Conservative radio host Glenn Beck saw the speech as divisive. “Michelle Obama gave a speech where… they’re worried about segregation again, and I don’t think that that was something that any of us worried about six years ago,” Beck said on his show. “Was anybody on the, ‘Hey, we might all be segregated again?’ I don’t know. It’s strange how their policies to bring us all together is just driving a stake in our heart and a wedge between all of us.”

But not everyone saw the first lady’s remarks as insidious. “Mrs. Obama talked about Brown V. Board in a way nobody else could or would. It’s great not to be encumbered with the thoughts of reelection and campaign,” a Daily Kos member wrote. “There is no greater truth with her conclusion in today’s America, and what we must continue to fight.”

Lauren Sherwood, the student who introduced Obama at the event, told the Kansas City Star that the speech was “beautiful” and “everything you could have hoped for in a graduation speech, plus more.”

Other students agreed. “It did really speak to us,” Topeka West High School student Onree Spencer said to the Star. “Even though past generations are hanging on to what they were taught, we need to be able to teach them about our generation.”

Obama was originally to give a combined commencement address for the five area schools on May 17, but parents protested the decision, complaining that the presence of the first lady, her security detail and cadre of staff would limit space for graduates’ families and overshadow a day that is supposed to honor the seniors’, not politics. The White House and the school district came to a compromise to have Obama speak the night before to the five schools, then each school would have its own graduation on Saturday.

Watch the first lady’s speech below.