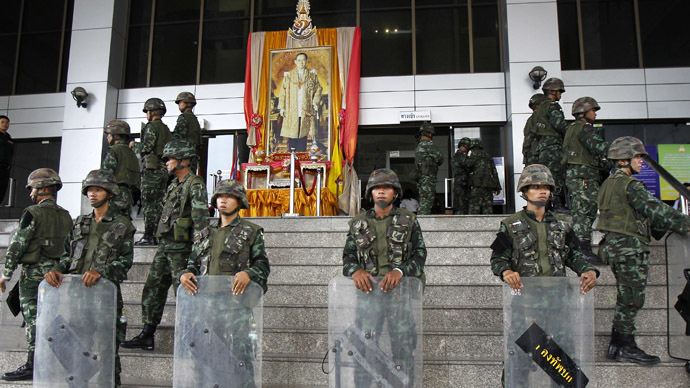 Thai soldiers stand guard at the criminal court in front of a portrait of Thailand’s King Bhumibol Adulyadej in Bangkok May 26, 2014. (Reuters)

Thailand’s army chief, staunch royalist General Prayuth Chan-ocha, is finally having his moment in the limelight.

He looks authentic – really a stereotypical coup leader – decked in his uniform, chest covered in medals, and with all that talk about saving the country. Only dark glasses are missing, otherwise he would easily pass for a Southeast Asian Pinochet.

He snaps at the press, insults journalists and talks about curfew as if it would be some scout game, which he could be authorized to impose on the entire nation.

“The general who led the military takeover of Thailand is known as an ardent defender of the monarchy, an adversary of the former prime minister at the center of the nation’s political crisis, and a prickly personality prone to snap at unwanted questions”, wrote AP on 23 May, 2014.

General Prayuth and his junta, did much more than overthrow the government. They summoned and humiliated now ousted Prime Minister Yingluck Shinawatra and her 22 associates, and they also, at least temporarily, disappeared several government and ‘opposition’ leaders. The press was unscrupulously ordered to shut up and a 10PM to 5AM curfew was imposed all over this divided country.

One Western analyst who resides in the city of Chiang Mai (he did not want to be identified out of fear of retributions), explained:

“The coup here included some disturbing developments out of the Hitler playbook. Just before the coup, leaders of the opposition and of the government attended a meeting organized by the military. It was supposedly for a peaceful discussion. But before they could leave the meeting place, the leaders of both groups were suddenly arrested by the military – and the coup was on.

Chiang Mai city where I live is far from the ‘action’ in the capital Bangkok. And we haven’t seen any military activity here yet. But this city is a tourist Mecca, and the downtown streets are usually full of Thais and tourists. However, tonight as the military imposed an after-10pm curfew on the whole country the streets outside my room are eerily empty, with only the very occasional vehicle passing by.”

Of course many tourists cancelled their trips to the Kingdom. The country is on the brink of recession; its gross domestic product shrank by 2.1 percent in the first quarter of 2014 compared with the previous three months. Political violence shattered confidence, and several analysts are predicting total collapse of the country that was, for decades, one of the staunchest allies of the West in Southeast Asia.

Not that anyone at the top seems to care too much about such ‘details’ like economic growth or economic contraction. All this is not about economy (economy was the main concern of Thaksin Shinawatra, the exiled tycoon and modern day capitalist with certain socialist ideas).

What is at stake in Thailand right now is the very survival of the old regime, which is saturated with staunch pro-Western cadres: mostly those from the Cold War era, when the students and leftists were relentlessly murdered and tortured. It is also full of collaborators from the ‘Vietnam War’ days, when Thailand allowed the US and its allies to use its land, airports, pilots and poor and often underage girls from the north, for one sole purpose: to exterminate several million Laotians, Cambodians and Vietnamese, mainly civilians.

Most of the Thai elite were either born, educated or trained (or all of the above) in the United States or Europe. The monarch is US-born and raised, while several right wing politicians, including former Prime Minister Abhisit Vejjajiva and various key ‘opposition leaders’, spent many of their formative years at Eton, Oxford and Cambridge. Their main goal is to retain power, the tremendous gap between the rich and poor, and to keep the dispossessed majority at the fringes of Thai society.

Recently, Mr. Akanut Phromphan, the spokesman of the People’s Democratic Reform Committee (PDRC), and Oxford-educated leader of the pro-elite ‘opposition’ told me: “This, here, right now – it is not a class struggle.” He then talked about so-called “Red Shirts” who consist of both Thaksin Shinawatra’s supporters, and also of many Marxists. He made sure to repeat to me, again and again, that these protesters are having nothing to do with fighting for equality for all Thais, or, god forbid, with class struggle. Then he continued:

“We want to oust Thaksin Shinawatra, his sister (then still caretaker Prime Minister) Yingluck Shinawatra, her Pheu Thai party, and all of their supporters… Only when they are gone, then we can return to a ‘normal democratic process’…”

What he meant was obvious: ‘destroy democracy, the will of the majority, and then, after banning the majority parties and leaders, call for new elections and compete with only those who are left.’

Now they succeeded – by sending tanks onto the streets of Bangkok.

Mr. Phromphan did not even try to hide his admiration for the military. He had said before the coup:

“Once we are holding power, we will reform the police!”

“What about the military?” I asked.

“The military performed at least a dozen of military coups since the 1930’s”, I suggested. “And all of Bangkok is now talking about a possibility of yet another one.”

They performed many more, of course, but I was sticking to their own, official count.

“There is nothing wrong with the Thai military”, Phromphan replied, darkly.

His followers confirmed whom they are fighting for, and on whose side. : “We are all for the Monarchy! And we are one with our military”, resolutely declared Mr. Sokoltee Phattiyakol, member of the PDRC.

Democracy? Not their method

Elections, democracy, did not work for the elite. There were democratic and free elections in 2001, in 2005, 2006, 2007 and finally in 2011. In 2014, ‘protesters’ or call it ‘opposition’, intimidated voters, beat up some of them openly and publicly, barricaded polling stations. It is because they knew that, like in all previous elections Thai people would vote in, again and again, either Mr. Shinawatra directly, or at least his political allies.

That would mean a modern, capitalist but socially oriented Thailand, most likely much closer to China than to the West.

And such an outcome is clearly unacceptable in the client states of the West. Thailand learned well from Washington, London and Paris: elections and ‘democracy’ are accepted only when people vote for those designated by the elite.

Like in Chile or Venezuela, the Dominican Republic, or pre-1965 Indonesia, and even in 2014 Ukraine: when people vote ‘irresponsibly’ (to borrow from the lexicon of Kissinger), the West and its allies inside the country are always ready to ‘correct the mistakes’, by smashing elected governments and the voters, by sending jets flying over their heads and tanks rolling down their streets. Then people start disappearing, and guns begin to fire relentlessly. The fear, horror that engulfs the nations, is the best ally of the rulers.

The guns were firing on May 22, 2014, where the crowds, supporters of democratically elected leaders, were gathering and were ready to march on the center of the capital.

‘How far Thailand has fallen’

This time it was too much even for some radically pro-business publications, like the influential, London-based The Economist. It snapped at the Thai elite a few days before the coup, right after the Thai Constitutional Court demanded that Ms. Yingluck and nine members of her cabinet resign:

“With all the pretense of due legal process and distaste at Ms Yingluck’s nepotism, this was not an offence that merited the ousting of a prime minister. Instead, the ruling is a measure of quite how far Thailand has fallen, how deeply it is divided and how badly its institutions are broken. Unless Thais step back from the brink, their country risks falling into chaos and anarchy, or outright violence.”

Reaction from Western capitals remained rhetoric and muted, in sharp contrast to the way Washington, London or Paris treat Russia or China, ostracizing them after often totally absurd but loudly trumpeted charges.

There was no talk of immediate sanctions against the Kingdom, and no generals were put on the list of individuals banned from entering the United States or European Union.

As Reuters reported on May 22, 2014, “US Secretary of State John Kerry said there was no justification for the coup, which would have “negative implications” for ties, especially military ones … He also called for the release of detained politicians. There was also condemnation from France, the European Union and the United Nations human rights office. Japan said the coup was regrettable and Australia said it was “gravely concerned.””

But nothing more substantial came; there was no direct action and no threat emerging from the handlers of the Thai ‘elite’, at least not openly. After all, the Thai military and Thai elite and Thai (self-censored)… were always absolutely reliable when it came to the most important things for the Empire: in torturing and liquidating, or at least helping to torture and to liquidate, almost all progressive forces in the country and in the region.

Just two weeks ago, I was driving through the countryside of northern Thailand, between the city of Chiang Rai and the border with Burma, (Myanmar). There, ethnic majorities were living for decades without any rights, without citizenship, education and medical care. It was brutal world, totally unjust.

Then Thaksim came. Capitalist or not, he did what many leaders in Latin America or even Russia would do: he gave them citizenships and sent them to school, gave them the right to receive free medical care and rural subsidies.

These are simple, good people. I talked to them for hours, in the villages of Yao and Lahu tribes. Their stories, testimonies, are simple:

“I support the government and Mr Thaksim”, explained a 54-years old farmer. “They help the poor here. They eradicated opium growing and introduced sound agriculture. They built the school here… and now we are getting free medical care. It totally changed our life.”

A lady, young mother, chips in: “They do so much for children. Now 15 years of education is free.”

“Maybe the army is not going to intervene,” said one of the farmers, with hope in his eyes.

It did. It is intervening now… against the will of the Thai majority, and with absolute arrogance. They know something that they would not tell. Like the Egyptian military right now, like the Ukrainian one.

One of the villagers, an old lady, looked towards the road: “If they intervene, then maybe this entire country will go up in flames”.