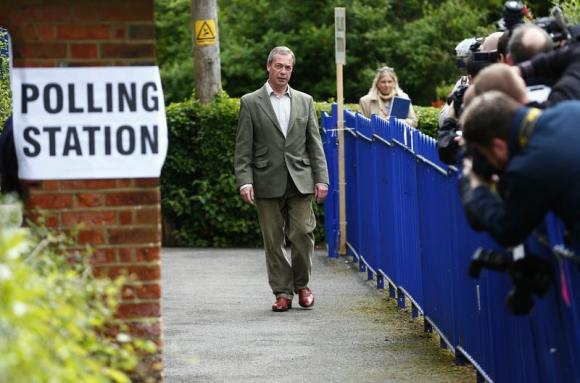 Yesterday we highlighted the European people’s growing ‘revulsion’ against Europe and overnight we got yet another confirmation that the status quo – despite record low bond yields and record high stock and real estate prices – are losing their grip on control. Having taken the lead in the polls last week, UKIP’s Nigel Farage has scored a major victory in local elections in England with early results pointing to considerable gains for the euro-skeptic party:

As Reuters reports, one MP noted “I think Nigel Farage for quite a lot of those people is just a big sort of two fingers stuck up at what they feel is a sort of hectoring, out-of-touch elite.”

Britain’s anti-EU party UKIP made strong gains in local elections in England, siphoning support from Prime Minister David Cameron’s Conservatives as it capitalised on discontent about immigration and mainstream politics.

The gains by the UK Independence Party, which wants Britain to leave the EU, will pile pressure on Cameron to toughen his approach to Europe and alarm some in his party who worry UKIP could scupper the Conservatives hopes of winning next year’s national election.

The strong support for UKIP indicated by early local council results suggests the party could also do well in elections to the European Parliament, also held on Thursday.

Farage told reporters he was cheered by the early results and thought they were a good platform to challenge for seats in the 2015 national election.

“Looking at the average vote shares across the country, and without wishing to count any chickens before they’re hatched, it looks pretty good,” he told reporters.

“I think Nigel Farage for quite a lot of those people is just a big sort of two fingers stuck up at what they feel is a sort of hectoring, out-of-touch elite,” Jeremy Browne, a Liberal Democrat lawmaker

The European elections were held on the same day, but the results will not be announced until Sunday evening, in line with the rest of the EU. They will determine the political persuasion of Britain’s 73 lawmakers in the 751-seat European Parliament.

“There’s been a vote for UKIP and that sends us a very clear message that people have concerns about immigration, about welfare, about schools and skills of course,” said Michael Gove, the Conservative education minister.

“We will pay attention to those concerns.”

Change – it appears – is coming.