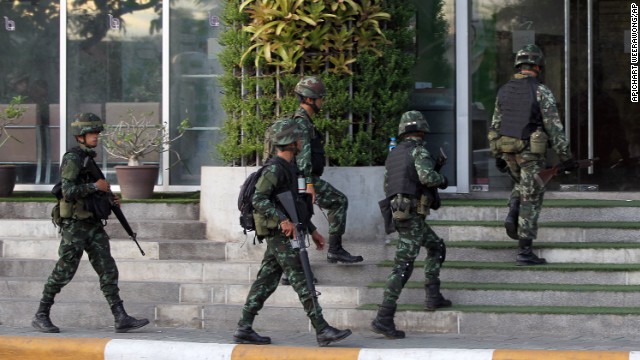 Thai soldiers walk into the National Broadcasting Services of Thailand building on May 20. All Thai TV stations were being guarded by the military. 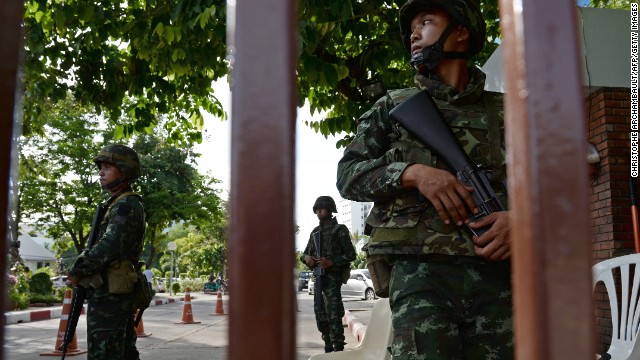 Thai soldiers stand guard outside the Government Public Relations Department in Bangkok on Tuesday, May 20.

Bangkok (CNN) — The Thai army declared martial law throughout the country Tuesday in a surprise move that an aide to the embattled Prime Minister said the government didn’t know about beforehand.

“They took this action unilaterally. The government is having a special meeting regarding this. We have to watch and see if the army chief honors his declaration of impartiality,” the aide said, describing the situation as “half a coup d’etat.”

Lt. Gen. Nipat Thonglek told CNN the move was not a coup.

“The Army aims to maintain peace, order and public safety for all groups and all parties,” a ticker running on the army’s television channel said. “People are urged not to panic, and can carry on their business as usual. Declaring martial law is not a coup d’etat.”

Martial law went into effect at 3 a.m. on Tuesday, the ticker said.

All Thai TV stations are being guarded by the military, Thai public television announced, showing pictures of soldiers and armored vehicles taking positions outside broadcast facilities in the country’s capital.

In a statement read on Thai television, the military declared that all of the country’s radio and television stations must suspend their normal programs “when it is needed.”

The dramatic announcements come days after the head of the army issued a stern warning after political violence had surged in the country’s capital.

The U.S. Embassy in Bangkok alerted American citizens in the country to the invoking of martial law in a statement Tuesday. It warned them to pay attention to media coverage of Thailand and avoid protests and public gatherings, saying that even peaceful events can turn violent.

Political tensions have been running high in Thailand. Supporters and opponents of the country’s government have staged mass protests in recent days, and earlier this month a top court removed caretaker Prime Minister Yingluck Shinawatra from office, along with nine cabinet ministers.

It’s too soon to tell whether the military’s declaration of martial law will ease tensions or heighten them, analysts said.

“This is a precarious time now for the army,” he said. “They have to be even-handed.”

If the military appears to be favoring one side, he said, violence could escalate rather than cool down.

“If it’s seen as favoring one side or the other side, then we could see more violence and turmoil against the military,” he said.

“Right now the military has deployed troops around key intersections of the city. Traffic is a real mess here at the moment, but there’s no violence,” he said. “I think what the military is trying to do with this…is to convince protesters to go home. They’re trying to dial down the tensions here as well as preempt several large rallies and strikes that were scheduled for later this week.”

But what happens next will depend on how protesters react, he said.

“The military is taking a step by step, gentle approach to see if they can get things to improve,” Quaglia said. “If not, they’ll of course have to ratchet up their actions.”

Nipat said theprecise restrictions of martial law were being worked out.

The government’s “red shirt” support base, many of whom hail from the country’s rural north and northeast, view Yingluck’s ouster as a “judicial coup” and have been protesting what they consider an unfair bias by many of the country’s institutions against their side.

Anti-government protesters are seeking a new government — but not through elections, which the opposition Democrat Party has boycotted, arguing the alleged corruption of their political rivals makes widespread reform necessary before any meaningful vote can be held.

“That being said, martial law will not solve the political problems that continue to haunt this country,” he said. “The differences are stark, and I don’t think the military can step in and by force fix the political issues.”