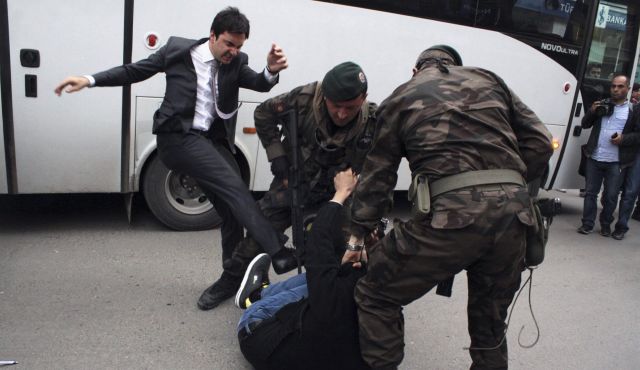 For those curious how much further into banana status the “developed” world may further drop, look no further than Turkey which is rapidly becoming the case study of banana governance par excellence.

Last Wednesday, PM Recep Erdogan (who has already served the maximum three terms as prime minister and is expected to run for president in August) visited the coal mine in the western town of Soma where 282 miners were killed in a tragic mining accident which also was the country’s worst mining disaster. But if the purpose of his visit was political and to generate empathy brownie points with the local population, things quickly turned sour after angry protesters heckled Erdogan and scuffles broke out between demonstrators and police in Soma, forcing the Turkish leader to take refuge in a supermarket before being driven off in a black vehicle.

What happened next was shocking: according to Turkish newspaper Hurriyet a protester kicked a vehicle in Erdogan’s convoy, prompting the special forces police to jump in and force the man to the ground. Then Yusuf Yerkel, an advisor to the Rukish prime minister, kicked the protester “three or four times,” the paper said. Unfortunately for Yerkel, the moment was caught on video and immediately made the rounds on recently unbanned Twitter.

As Haaretz reports Twitter was quickly abuzz with posts condemning Yerkel’s action and an opposition party demanded an explanation for it.

“Do his responsibilities include beating up and kicking protesters or citizens? On which legal grounds was he given this authority?” lawmaker Ugur Bayraktutan asked in a question submitted to parliament for the government to answer. The prime minister’s office distanced itself from the incident, with one official saying the issue was Yerkel’s “own personal matter.”

But that’s not the punchline.

What was the proverbial cherry on top is that yesterday Yerkel “went on sick leave due to soft tissue trauma he sustained in his right leg. According to the report in Hurriyet an Ankara hospital granted Yerkel a week of sick leave to recover from his injuries.“

So let that be a lesson to you: the next time you kick protesters already manhandled by angry cops, be prepared to reap the soft-tissue consequences. And if doing so in the US, be sure to have Obamacare for when the doctor invoice with many zeros comes in the mail.