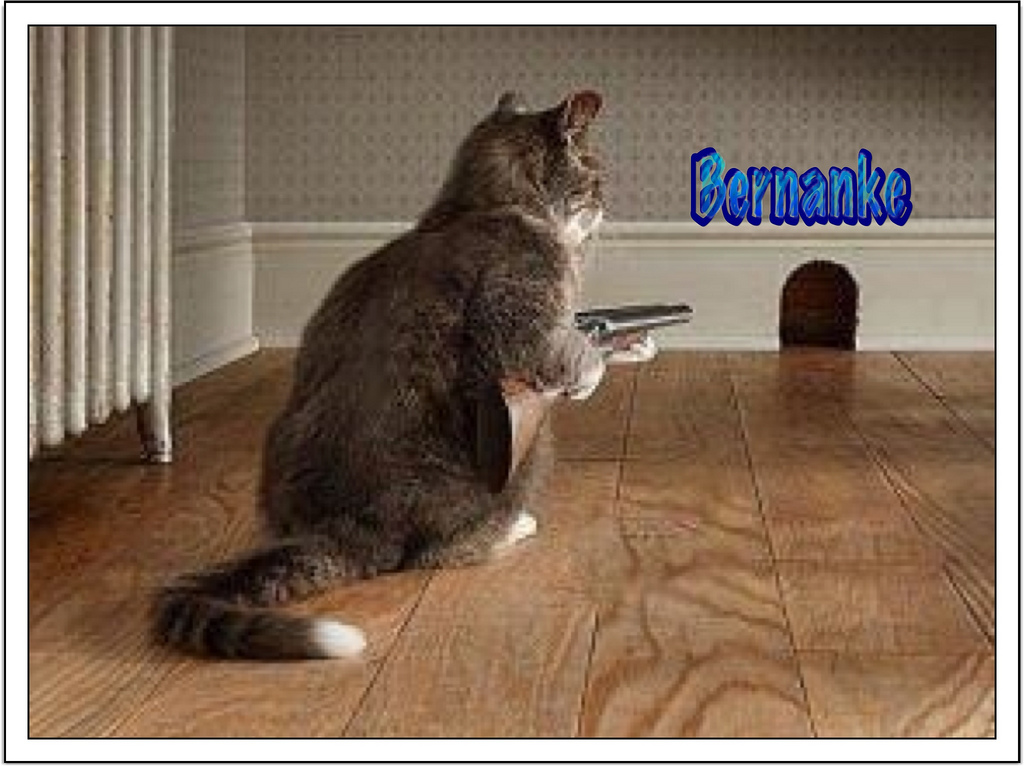 – Bernanke Shocker: “No Rate Normalization During My Lifetime” (ZeroHedege, May 16, 2014):

Forget all talk about “dots“, “6 months”, or any other prognostication from the Fed’s new leadership about what will happen in the near and not so near future. For the real answer prepare to shelve out the usual fee of $250,000 for an hour with the Chairsatan, or read Reuters’ account of what others who have done so, have learned. The answer is a stunner.

“At least one guest left a New York restaurant with the impression Bernanke, 60, does not expect the federal funds rate, the Fed’s main benchmark interest rate, to rise back to its long-term average of around 4 percent in Bernanke’s lifetime. “Shocking when he said this,” the guest scribbled in his notes. “Is that really true?” he scribbled at another point, according to the notes reviewed by Reuters.”
To think one could have read Zero Hedge for free for the past 5 years and gotten the same answer (time for a pop quiz: pumping liquidity into a closed system in perpetuity is i) inflationary or ii) deflationary?). But no, one would rather pay Bernanke’s former annual salary in less than an hour to get the answer from the same person who infamously stated that “subprime was contained”, that “there is no housing bubble”, and that he doesn’t buy the premise of house price declines as there has never been a “decline of house prices on a nationwide basis.“

Still, one can’t blame Bernanke for providing a service that the market (one market the former chairman didn’t manage to break with his central planning spree, unlike all other markets) demands. Alan Greenspan waited only a week after his departure before addressing a private dinner hosted by Lehman Brothers, the investment bank whose collapse in 2008 sent the financial crisis into high gear.

Bernanke’s private dinners, all of which cost around $250,000 began near the end of March, roughly two months after his retirement.

We say around because while Greenspan has already been rocked by 50% deflation in his “assets“, Bernanke too is starting to realize that without constant liquidity injections, his “inflationary” days are also numbered:

The baseline fee for a private get together is $250,000, and more if Bernanke needs to travel from his home in Washington, though the price has dropped some as he has done more events, the sources said. The size of that decline could not be immediately learned.

Certainly expect the price of a Bernanke dinner to tumble now that virtually everyone who matters, and can afford the fee, has already listened to the Chairsatan in private, and the value of Bernanke’s insight has been, shall we say, “diluted”:

Hedge fund attendees have included Paul Tudor Jones of Tudor Investment Corp and David Einhorn of Greenlight Capital. Others have included Michael Novogratz of Fortress Investment Group, and Larry Robbins of Glenview Capital, as previously reported in other media. All declined to comment to Reuters.

David Tepper, the hedge fund manager who earned $3.5 billion in 2013 to rank as the industry’s best paid investor, said at an industry conference this week that he attended the first private dinner and peppered Bernanke with questions. But Tepper said he didn’t make the best use of the information, a lapse he now regrets. “I screwed up that trade,” he said.

At the same conference, Novogratz from Fortress said many hedge funds that bet on big interest rate and currency movements missed a hint from Bernanke at the dinner and failed to buy long duration Treasuries.

Oh yeah, it was Bernanke hinting that Tsys are due for a surge – nothing to do with the fact that the global economy is stalling and that everyone and the kitchen sink was short rates, launching one of the biggest short squeezes in recent history.

Not surprisingly, not everyone is a happy customer:

Not every guest believes they came away from a Bernanke dinner with an exclusive insight.

“People can try all they want to feel that they got him to say something extra to them, but he never does,” said one person who attended one of the dinners.

As for Bernanke’s profound insight, it appears all he really did is admit that he failed at stimulating the economy.

In one dinner-table exchange with investors, Bernanke argued that fiscal tightening, constrained financial markets and lower U.S. productivity all point to lower real rates than would be considered normal for a long time to come.

Based on trading in the massive Eurodollar futures market, investors have in recent months tempered expectations of rate rises in the years ahead; as it stands, they don’t expect the fed funds rate to return to 4 percent until 2022. As recently as last September, futures markets signaled they thought this would happen by the end of 2018.

At the dinners, Bernanke has also argued the Fed would want to delay raising rates if the tighter financial conditions created could threaten to harm the economy. He has also stressed that financial stability concerns would more formally be considered in policy-making, according to the sources.

Of course, the slowing down of the economy, snow or no snow, is precisely the reason why bonds are bid. We explained as much recently:

“When the Fed begins lifting rates is almost not an issue any more,” Stan Jonas, former managing partner of Axiom Management Partners in New York, “The real question is how fast does the Fed increase rates and where do they stop. The market now sees diminished macroeconomic expectations and expects the Fed to ending the upcoming tightening cycle at around 3 percent.” 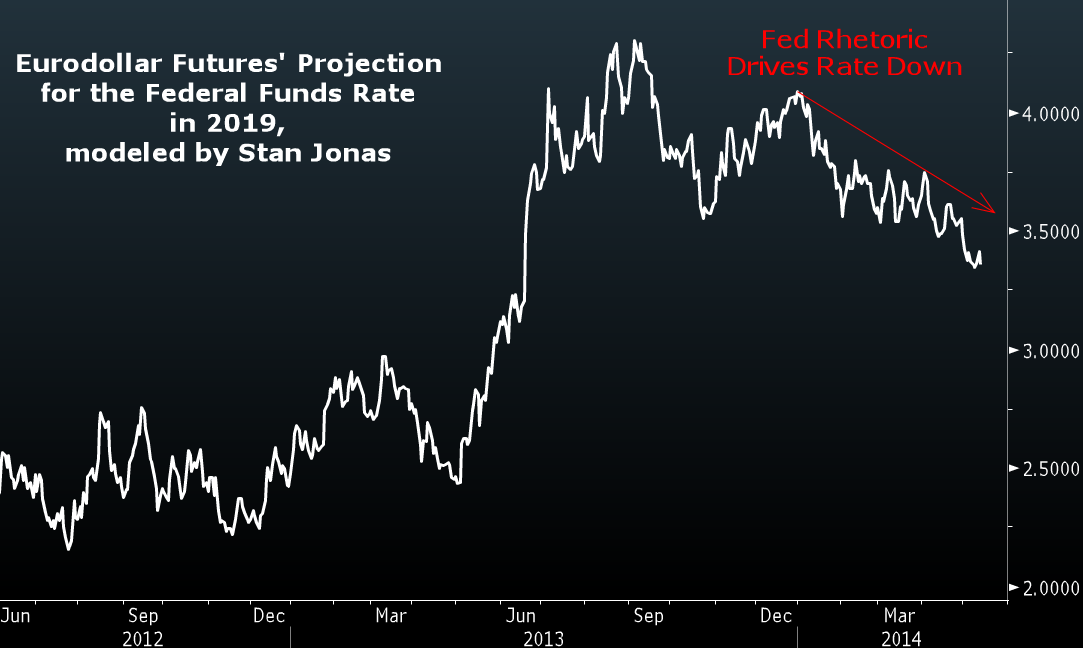 In other words, the bond market believes in the Japanization of America and another lost decade as the new normal low/no growth world slugs along with no escape velocity dreams anytime soon.

Or even more clearly – it’s about more than this cycle… the Fed’s taper will run its course, the Fed will tighten rates and the economy will slump rapidly meaning the Fed will ease once again (and by then QE will have lost all credibility as anything but an asset inflation machine and along with it – the Fed’s credibility)… the tumble in forward rates indicates the markets growing belief that the future growthiness looks very different from the dream priced into stocks…

Or, in other words, the Taper will lead to the Untaper, as we predicted exactly one year ago, leading to QE number… we don’t even know the nuimber any more – 5,  6,  7? Rinse. Repeat.

As for the conclusion:

“He’s being paid … for sharing his wisdom and predictions, and presumably not to exert his influence on the Fed,” he added. This will go on “until he’s proven to not be all that clairvoyant.“

The biggest shocker is not that Bernanke punked the market once again and after 5 years of QE the US economy is once again headed into a tailspin – most people with some common sense knew that in 2009.

2 thoughts on “Bernanke Shocker: ‘No Rate Normalization During My Lifetime’”