We have previously profiled the “holy grail” gas deal between Russia and China on several occasions, and with its announcement scheduled for next week (barring some unmitigated disaster) during Putin’s first visit to China since Xi’s appointment as president last March, it is time to do a status update on where it stands even if according to SCMP, at this point finding the “holy grail” is merely a formality.

The Hong Kong publication reports that China and Russia hope to sign a massive deal for natural gas supply when their leaders meet in a regional summit in Shanghai next week, a senior diplomat has said. Under the deal, Russia will supply 38 billion cubic metres of natural gas annually to China for 30 years. Deputy Foreign Minister Cheng Guoping told reporters yesterday that President Xi Jinping would discuss the deal and other points of co-operation with his Russian counterpart, Vladimir Putin, who will visit Shanghai on Tuesday.

Russian Deputy Energy Minister Anatoly Yanovsky said on Monday that the deal was “98 per cent ready”. Supply would begin no later than the end of 2018. 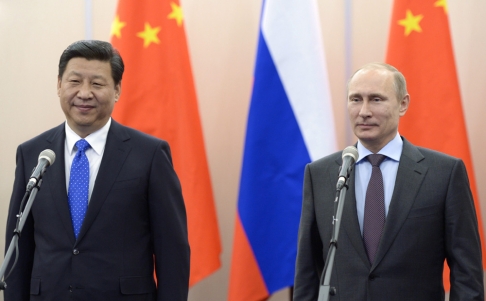 Indicating just how important China now is to Russia, Bloomberg adds that traveling with Putin will be the who-is-who of Russian politics and business:

As reported previously, the deal is between Russia’s Gazprom and China National Petroleum Corporation (CNPC), but the two sides have yet to agree on pricing despite more than a decade of negotiations. Xi will meet Putin on the sidelines of the Conference on Interaction and Confidence Building Measures in Asia, to be attended by 46 nations and agencies.

“The companies of the two nations are exchanging views on the pricing issue,” Cheng said. “We will strive to get the companies to sign the natural gas co-operation deal and [have it] witnessed by both state leaders while Putin is in China.”

Cheng said Xi and Putin reached a consensus over natural gas co-operation when Xi attended the Sochi Winter Olympics in February. Companies of both nations have reached agreement on many aspects of the deal.

Russian business daily Vedomosti reported last month that the companies were negotiating a price in the range of US$360 to US$400 per 1,000 cubic metres.

Gazprom chief executive officer Alexey Miller said last year that the supply could be boosted to 60 billion cubic metres a year over the period of the contract. The gas would be supplied via two pipelines entering northeast and northwest China.

Russia has been trying to diversify its energy export base beyond the European market, where Gazprom generates about 80 per cent of its revenue.

China relied on imports for nearly a third of its natural gas needs, Xinhua said.

Putin’s visit will be his first to China since Xi was named president in March last year.

And also on the dollar as we reported in “Russia Holds “De-Dollarization Meeting”: China, Iran Willing To Drop USD From Bilateral Trade.” In which case expect random Chinese space rockets to mysteriously explode during take off too.