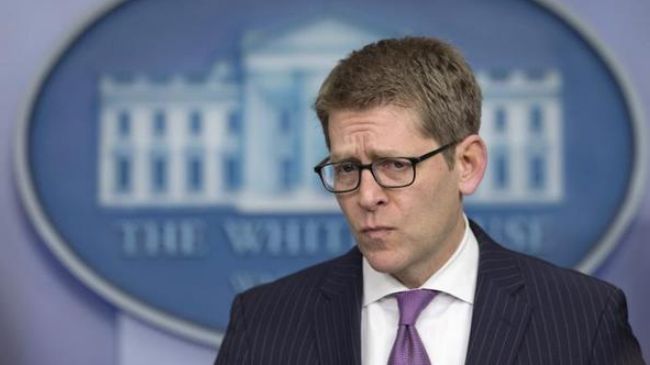 The situation “suggests that there has not been a significant change in attitude by Russia towards the efforts by separatists in Ukraine to breed chaos and to prevent the effective carrying out of national elections,” Carney said.

“The focus of the inter

national community, including Russia, should be on supporting the Ukraine government’s efforts to hold a presidential election on May 25,” he added.

The US accuses Russia of violating Ukraine’s sovereignty by stirring up pro-Russia protests in eastern Ukraine. Russia denies the allegation.

Meanwhile, US State Department spokeswoman Jen Psaki said the vote “was an attempt to create further division and disorder in the country.”

“We do not recognize the illegal referendum,” she said. “It was illegal under Ukraine law.”

On Sunday, two eastern Ukrainian regions of Lugansk and Donetsk overwhelmingly voted in favor of independence from Kiev.

Sources say the two regions have begun preliminary talks on forging a union.

Russia said it respects the will of the people who voted in the referendums.

“In Moscow, we respect the will of the people of the Donetsk and Lugansk regions and are counting on practical implementation of the outcome of the referendum in a civilized manner, without any repeat of violence and through dialogue,” the Kremlin said in a statement on Monday.

1 thought on “US Does Not Recognize Referendums In Ukraine”